It’s our first week since we got a look at mayoral campaign finance reports, which means we’re about three weeks away from Election Day. We get to see how candidates are spending the money they’ve raised, and it’s also about the time some big endorsements come down the pike. Both of those happened this week, plus at least one candidate got a little punchy on our podcast EarBurner. All that and more, rounded up in our poll. Let’s do it.

The poll has ended.

So who had words for an opponent? It was Albert Black, who seems to be harboring a feeling between resentment and disappointment that his longtime friend Eric Johnson jumped into the race at the last minute. There’s a rumor that I’ve heard a lot while talking to folks around the mayor’s race, that state Rep. Johnson is only running for mayor to help put him in a position to run for congress. It’s never for attribution, until Black said it on our podcast. “I think what we’ve got right now is a puppet of Eric Johnson,” he said. “And, quite frankly, my attitude is what it is because my feelings are hurt. My feelings are hurt. He did not have to start a civil war. Now he’ll have family member against family member, cousin against cousin, county backed up against county, blocks of people against blocks of people, when he did not have to do that. There was another way to get to the 30th Congressional District seat.” In other observational news about Black, the guy works a room unlike anyone else running for mayor. He spent at least half an hour chatting up folks at the Old Monk before he left, including one couple who was visiting from New Mexico. Kudos for that effort. Black also endorsed Yvette Gbalazeh, better known as the activist Will Rap 4 Weed, for District 7’s City Council seat, which is currently occupied by Kevin Felder. — Matt Goodman

Villalba made the forum rounds this week, and he made a visit to a grooming shop in Preston Hollow. He was one of the few candidates to go to a Friday night Tea Party party, and posted that he plans to give the group the liberty and smaller government they seek. He’s against the reforms District Attorney John Creuzot announced this week, which Creuzot says are aimed at decriminalizing poverty. —Shawn Shinneman

Griggs took his turn on EarBurner this week, discussing such topics as the Margaret McDermott bridge, the Angela Hunt and Methodist Hospital thing, boxing (he used to do a little of it, but somehow doesn’t like Errol Spence), and Jim Schutze’s coverage of him. Ok, he didn’t so much talk about Schutze, but he was asked about him. He also chatted about VisitDallas, continuing his staunch disapproval. You know who hasn’t given any money to Griggs? The Hotel PAC. You know who gives a lot of money to the Hotel PAC? VisitDallas. That PAC has backed a lot of other mayoral candidates, which makes VisitDallas’ denial this week that they’re impacting where PAC funds go appear fishy. And then, today, the Dallas Fire Fighters Association threw its endorsement behind Griggs. Jim McDade, the organization’s president, said in a statement that Griggs stands out with “an invigorating, new plan to push Dallas forward.” The police association is waiting for the runoff to make an endorsement.—S.S.

Ablon came up in this Gromer Jeffers story as someone who will benefit from the increased turnout in District 13, where Laura Miller and Jennifer Staubach Gates are having an, um, spirited contest. Ablon lives in the district and is active there; his campaign has also targeted the voters there, many of whom, Jeffers notes, probably actually watch the commercials and have seen his. His campaign also sent out some spicy mailers attacking Scott Griggs, grouping him in with the admitted criminals Dwaine Caraway and Carolyn Davis. They accepted bribes. He had some questionable donations from children and a developer who was later indicted. Not the same thing, but this is politics. 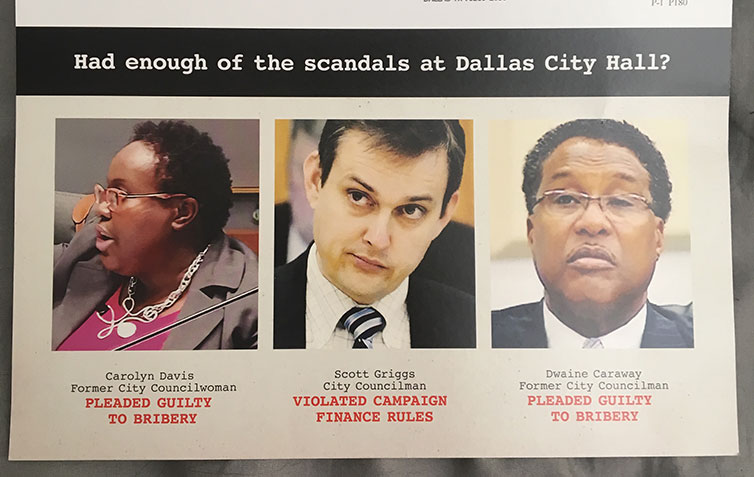 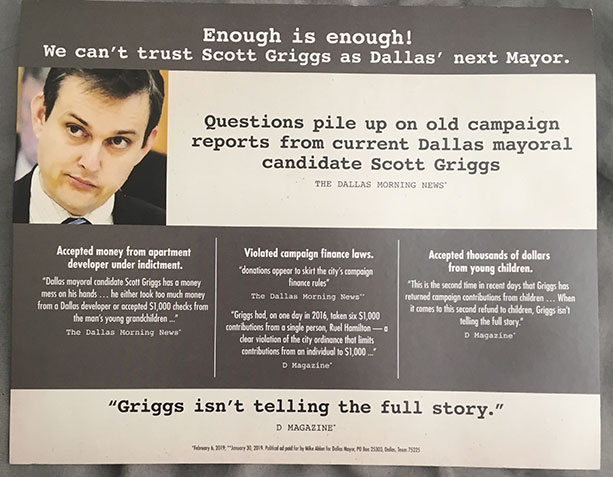 In the tiny font at the bottom of the mailer? “Political ad paid for by Mike Ablon for Dallas Mayor.” — M.G.

Solis’ campaign premiered their first TV spot today, which opens with his daughter who received a life-saving heart transplant and ends with the candidate promising universal pre-K and improved job training. Solis, a former Dallas ISD trustee, is uniquely positioned in the race to focus on education, which in almost every municipal race is a priority for voters.

I want you to know how personal this campaign is for me. The Dallas community helped my family and me through the darkest moment of our lives, and I will never forget that.

I’m running for mayor because I want to give back to the city that has given me and my family so much. pic.twitter.com/yM1mTF41GG

He spent the weekend block walking in North Dallas and held the campaign’s 64th small meet and greet. — M.G.

McBee was another candidate who Jeffers said should benefit from the D13 turnout. Her math checks out like Ablon’s: lots of money, appealing to older voters who will actually consume your campaign advertisements. Her campaign seems like it’s humming along. She had a good showing on EarBurner, in which she supported both removing IH-345 and exploring privatizing DFW International Airport and Love Field. — M.G.

Johnson came up in Albert Black’s run on EarBurner. Black says Johnson used to think of him as family, like a second father. The state rep. was at Black’s son’s wedding, in fact. And then Johnson made a late entrance into the mayoral race. Black calls the current iteration of Johnson a “puppet.” “And, quite frankly, my attitude is what it is because my feelings are hurt. My feelings are hurt. He did not have to start a Civil War.” If we get a response from Johnson, it won’t be on the podcast; he’s the only candidate to turn us down. Elsewhere, the DMN wrote about Johnson’s legislative efforts to require school districts to report demographic data about suspensions. And Johnson’s campaign posted his 1994 graduation speech from Greenhill. —S.S.

Montoya was on the podcast this week. It’s interesting. These conversations, of course, are meant to be pretty relaxed, certainly in comparison to candidates’ normal speaking engagements. That’s part of the fun. But Montoya politics as hard as anyone in this thing. And throughout the half hour, it never really seems to turn off, or even tone down. That’s not to say the discussion isn’t revealing. Montoya seems skeptical of an I-345 teardown, although she admits to being under-read on the subject. She’s untrusting of the narrative of Dallas’ booming growth, saying that what people are really talking about is the growth of Dallas-Fort Worth. And, of course, poverty is the biggest issue of all for the former chair of the Mayor’s Task Force on Poverty, although that doesn’t mean she dives into the complexities of things like, say housing policy. She talks a lot about jobs, about community resources such as libraries, and about meeting residents at their needs with things like certificate programs for folks who may not want or need to go to college. —S.S.

Kennedy’s campaign manager tells me she’s been out of the country, speaking on a panel about women’s rights and then attending an international book fair in Iraq. —S.S.

Correction: Johnson was not in the wedding of Tre Black, Albert’s son. He attended, and Albert misspoke multiple times.

Today Is Your last Chance To Register To Vote