Lyft’s new plan to allow low-income Dallas residents a cheap monthly scooter service sounds great. It sounds great. There are slices of our city far away from public transit stations, which leaves plenty of people in no man’s land. That’s why the city has been working to find first- and last-mile transportation options to fill the gaps. We just hosted a summit last week that explored this topic, particularly the challenge in creating a complete connected web and the role buses serve in enhancing the transit system. Uber recently partnered with DART to help with this problem, offering free and discounted rides to residents near a few rail stops in southern Dallas that had poor busing options.

Lyft has now announced that it will bring its scooters into town, including a deal that allows residents who qualify for federal public aid to score unlimited scooter rides for $5 a month. That’s equal to about two rides. For a lot of people, that could be legitimately helpful. The scooters aren’t exorbitantly expensive to begin with, but if you’re taking them to and from a transit stop you’re looking at between $3 and $6 dollars per day.

But then you look at the coverage map, and you realize how many residents chiseled out of the service area would stand to benefit. Most of the parts of town where people qualify for public assistance—South Dallas/Fair Park, Pleasant Grove, West Dallas, south Oak Cliff, and so on—are left out of the range. And if you leave a scooter outside of the coverage area, you’ll be fined through the app. Here’s the map. 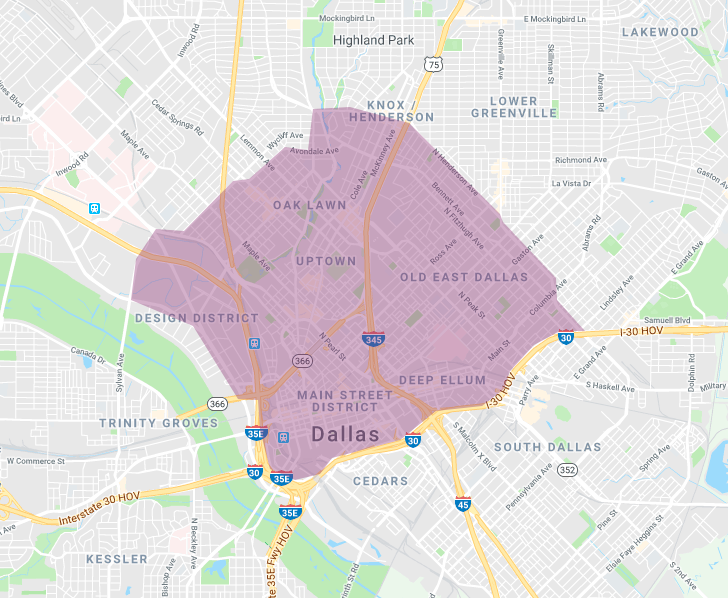 Tech companies such as Favor have been criticized for neglecting southern Dallas in its delivery range. Like Lyft, Favor based its initial area by using interstates 30 and 35 as its southernmost boundaries. After taking some punches on Twitter and in the media, the company quickly expanded it. This feels a bit more egregious, because of the ongoing conversation around mobility in southern portions of the city.

For its part, Lyft emailed to say that it’s starting with coverage “near public transportation stops and popular destinations and will continue to evaluate options for future deployment throughout the city.” They’ll have 350 scooters to begin. The company sent this statement:

We are committed to extending mobility options to communities that have historically been underserved. We will continue to evaluate our coverage areas – paired with information about which neighborhoods would benefit from scooters and the community pass program – to make decisions about areas to deploy our scooters as we continue to expand. And because we handle our scooter operations in-house, we’re able to address needs in real-time by bringing scooters where there is demand, including underserved areas that typically don’t have access to transportation, so there is the potential that we could quickly expand our coverage areas based on demand.