The last time I chatted with Lillian Salerno, it was over drinks on the patio at José on Lovers Lane, back when I still had a podcast and she was still in the race for the Democratic nomination for the 32nd Congressional District. She lost to Colin Allred in the runoff, but she hasn’t spent much time licking her wounds. The former Deputy Undersecretary for Rural Development under Obama is still in Dallas, now with a podcast of her own: Pod Bless Texas. I chatted with her on the phone earlier this week while she was in Washington, D.C., about her campaign regrets, her pod goals, and who’s going to play her cursing self in the new Netflix movie based on Michael Lewis’ latest book.

Lillian Salerno: I had so much fun on BraBurner. I didn’t have fun losing my election, that was not fun.

Kathy Wise: Tell me a little bit about Pod Bless Texas, your new podcast with Kendall Scudder. Who all have you had on and how’s it going?

Lillian: I’ve listened to podcasts, but I’m a woman over 50. And the demographic for podcasts, according to the podcast people, are people under 40. The millennial that I had run [for Texas Senate District 2 over GOP incumbent Bob Hall] during the same cycle, so 2018, his name is Kendall Scudder. He’s 29 years old. I had known him when I worked on Bill White’s campaign when he ran for governor in 2010. Kendall and I were together on election night and were really shocked, quite frankly, at what the turnout actually was in Texas and the Beto effect. We were like man, what can we do to keep this stuff going?

And we just sort of looked at the landscape and said Texas is the bullseye. What could we do to become people that people trust about Texas politics? But make it fun, in a new Molly Ivins kind of way—not that we could ever be her—but there’s nothing funnier than Texas politics and people. But the way it’s reported is so serious that people don’t understand that literally you just can’t help laughing. There’s something goofy every single day. 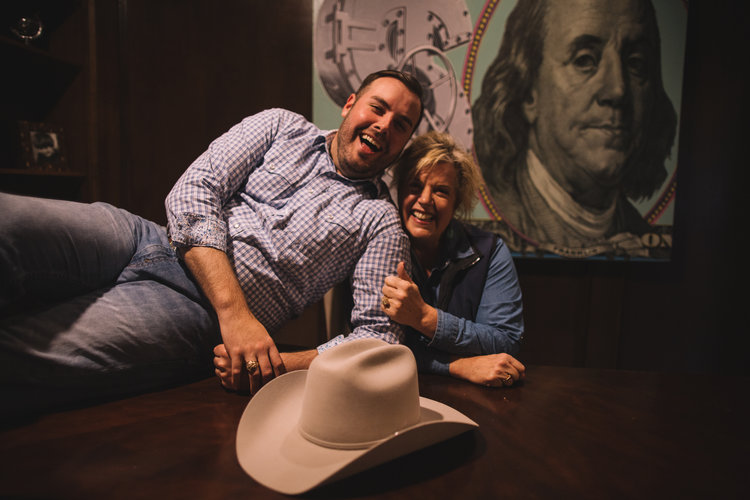 Kathy: Did you start by calling your friends?

Lillian: We know most of the people in the campaigns, and we just sort of called bullshit on bullshit on both sides. At first we were like, maybe we should be like a bridge builder to the Republicans, because I’ve always thought it’d be nice if we weren’t so divided. We tried the first two episodes. But you know what, we’re just two progressive people. It’s not that Republicans won’t listen to us, it’s just right now we’re probably gonna have mostly progressives that listen to us.

So we’ve had state rep Jim Hightower, the former commissioner and populist, when he was in town. And then we had Julie Johnson on, and we had Brandy Chambers, who lost. We wanted to be statewide, but we find ourselves a little Dallas-centric since he and I both live here. Kendall and I have a very special heart for rural Texas, because we just think it’s sort of been left behind. Nobody really cares about rural Texas because Texas is gonna turn blue because of the suburbs and I-35. Or that’s what the experts think. But we think they still need tending to.

Kathy: I want to bring back a version of BraBurner. I may need your advice.

Lillian: Yeah, I had so much fun with you all. I think I even asked you during the interview, “Do y’all get paid for doing this?” I’m not getting paid for doing this. I have spent an inordinate amount of time just to get it launched, but it’s sort of what I like to do cause I’m an entrepreneur. I loved the casualness of BraBurner. When you’re in that relaxed setting, it just makes people so much more authentic, in my opinion.

Kathy: Sitting on a patio will do that.

Lillian: It’s very interesting. I was so sort of uptight when I was running, which I regret. In that role it was hard to be myself because of the way people look at you when you’re a candidate. I struggled with that. It was just hard—I don’t know why, it just was. I like people so much, and in this role it’s real easy for me. And my partner, he’s funny. He and I have been taking the piss out of each other for 10 years.

Kathy: So what are your takeaways from your run for Congress?

Lillian: Well it was harder than I thought. I got into a runoff and then lost a runoff. I was a little bit naïve, quite frankly. I was just running because I wanted to serve, and I wanted to be part of a solution to make sure that we win back the house. But we won back the house. And so I wasn’t the successful candidate, but the guy that beat me, he’s now serving. So I’m happy about that, happy that we won the seat. I just still have sort of a post-traumatic stress about it.

Kathy: What are your thoughts on Colin so far?

Lillian: I’m a little bit more progressive than he is, but I think he’s on the right side. For his district, I think he’s doing just fine. I just think you have to go way left to get to where we need to be.

I’m not somebody who thinks the Green New Deal is gonna solve all of our problems. But let’s put it on the table, because when I was working for the Obama administration, we were really interested in climate change and carbon emission, and I was in charge of the energy policy at the Department of Agriculture. We thought we were doing really great work, and we made such little difference because we weren’t bold enough, because we didn’t think we could be, because we had a Republican-controlled Congress. And sometimes I do think radical ideas are ready in this current, where we find ourselves as a country. So I’m a little bit more, let’s go ahead and throw down and then let’s negotiate. But these crazies in Congress, they just won’t negotiate. It’s so hard for anyone to get things done.

Kathy: What do you think the priorities need to be for Dallas?

Lillian: Oh man. Well, I have some friends who are running for this mayoral race, but I’m just consistently surprised that Dallas, with as many smart people as it has and as a center of wealth, I just can’t believe they won’t demand better. I think they’re trying on education—I guess DISD is doing better—but we still have such a long way to go toward getting a workforce that’s ready for this new world of artificial intelligence and technology. We’re shamefully behind in my opinion, so I would spend a lot of my time on workforce development.

I’ve got a 21-year-old son, and there’s no way he’d move to Dallas, Texas. There’s no public transport. I mean there is, but young people wanna go to New York and San Francisco and Chicago where they don’t have cars. My son was raised in Texas, but he’s been at university and he doesn’t ever want to own a car again. I just don’t know how we’re gonna attract those folks until we have that serious discussion.

Kathy: How are you filling your days now, besides the podcast?

Lillian: I was working on the Farm Bill—it just passed in December—regarding hemp production. In Texas, we’re way behind on hemp because we didn’t do what 40 other states did, which was already have our regulations in place. I’ve done a little bit on medical cannabis, also. But I wanna see if this podcast has the opportunity to really help move the needle. We have a bunch of listeners, though, and people criticize us, so I know we’re doing something right.

Kathy: And now it looks like you are going to be portrayed on Netflix, in a movie based on Michael Lewis’ book The Fifth Risk about the Trump administration.

Lillian: When I was a bureaucrat serving the Obama administration, I was always sort of a Texas—I don’t know about spitfire, cause I’m too old—but I was always cussing, quite frankly. I’m so worried they’re gonna cast somebody that’s not sexy or attractive. Cause I am from Dallas. So my dream is to have Connie Britton portray me, but she probably has something else going.

And I just found out yesterday the part of Netflix that bought the rights to Michael’s book is the Obamas’ Higher Ground Productions. He talked about doing a book, but I just figured he’d throw some of us out. I didn’t know what it meant when people have a bestseller like Michael Lewis, that lots of people read it, so I would get pinged on Facebook with people saying, “I just read your chapter; thanks for what you did. What’re you doing now?” I was like, Oh, people actually read still. Awesome.

But now that that happened, all the people from my campaign are like, Oh, do you think they’ll cover us? Because Michael spent time with us here in Dallas, and we all just have this little fantasy. He has a big love for Texas, I guess since he grew up in New Orleans and he’s like, It’d be fun to cover politics down here. And I’m like, Well, I’m hoping to win. But sorry, you can cover somebody else if you want.

I’m hopeful. Michael wants to make sure my story gets told because he thinks it’s colorful. And I’m the only one who cussed in the whole book, damn it.

Today Is Your last Chance To Register To Vote