On Tuesday night, inside an Oak Cliff coffee shop packed shoulder-to-shoulder with people, the actor William Jackson Harper met the man who influenced the writing of his first play. Or, rather, the man who chronicled the version of Dallas that informed his play. Harper, who plays Chidi on NBC’s The Good Place, was born at Methodist Dallas Medical Center a mile north. He is a graduate of Garland’s Lakeview Centennial High School. Jim Schutze is the longtime columnist at the Dallas Observer and the author of the long out-of-print book, The Accommodation: The Politics of Race in an American City.

The book was why the two men were at Wild Detectives. Harper’s connection to Dallas and his curiosity about the city’s racial history led him to The Accommodation. He recalled one day working at Half Price Books in 2003 or 2004, when someone sold back a copy. Harper bought it before it could reach the shelves.

“It was so nuanced as far as why people were doing what they were doing,” Harper said. “Like sort of where being a product of their time made a progressive of that time sort of reprehensible. It blew my mind. It made a lot of things make sense all of a sudden.”

In the book, Schutze chronicles the Civil Rights Movement, or lack thereof, in Dallas. Rather than a push for equal rights, he tells the story of how the city forged a political arrangement, keeping black leadership in southern Dallas complacent and reliant upon Dallas’ moneyed white leadership north of the Trinity River. At the time of its publishing in 1986, the Dallas Citizens Council attempted to kill it. They demanded Taylor Publishing to stop its printing. They succeeded, but only briefly. A publisher from New Jersey acquired the rights and printed 5,000 copies. Some in the city derided it. Pastor W. A. Criswell of First Baptist Church, where, ironically, Harper attended vacation Bible school in his youth, called it pornographic.

“His view was that my book, because it criticized him and it seemed to preach integration, was morally filthy,” Schutze said.

Nevertheless, the story—especially the plight of residents in the neighborhoods surrounding Fair Park, which had their properties seized by eminent domain and razed so that white fairgoers didn’t have to look at them—resonated with Harper. He said he sought to find answers about why things “feel the way they do in Dallas.” Eventually, the search for those answers culminated in him adapting The Accommodation, albeit loosely, into a play called “Travisville.” He was dissatisfied with the usual race narrative and portrayal of the black experience. He called it “monolithic.” He disagreed with the idea that there is a single, unifying narrative of black culture in this country. And so he set about bringing the details in Schutze’s book to life. “Travisville” sat on the shelf for eight years until it finally debuted in October of 2018 at Ensemble Studio Theatre in New York City.

Set in 1964, Harper’s play tells the story of a fictional Texas church community that the Civil Rights Movement largely passed over. Elder Elden Hearst, a local minister and head of the Ministers’ Alliance, must confront the city’s desire to destroy an African American neighborhood to build a mall. He wrestles with the competing opinions of his fellow pastors, as well as the arrival of a newcomer, Zeke Phillips—loosely based on the Rev. Peter Johnson—who looks to challenge the community’s racial status quo. 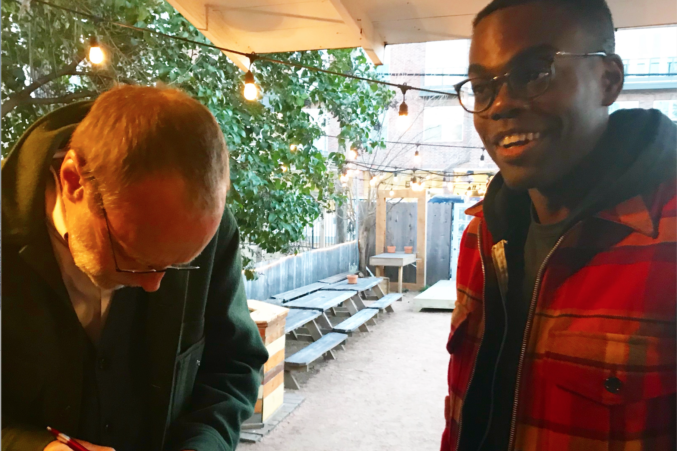 In the 20th century,  every level of government intentionally segregated housing through a series of policies, like approving loans for white Americans that were used in newly built suburban communities. The black population was placed in housing projects, and their neighborhoods became targets. Municipalities leveled them to rid cities of “blight” in the name of progress, sometimes replacing entire communities with freeways. The plot of “Travisville” and the choices that Hearst must make uniquely parallel Dallas’ history.

“The thing about your book, and the thing that I try to do in the play, was, this person is doing the best they can with what they’ve been given and from what their life has been,” Harper said. “And if their life has been steeped in a sort of privilege or social status that has been unquestioned, that’s the lens through which they view everything, even if they are trying to move the needle forward.”

“Travisville” ran off Broadway and ended a few weeks after it began. Its future is currently in limbo. However, some theaters in Dallas are reading it and Harper hopes that it will be performed here. If it is, it may be the closest that many Dallasites will get to reading The Accommodation, as efforts to get it reprinted have gone nowhere. It’s passed around digitally in many circles as a PDF; some fans of the book printed it out and had Schutze and Harper sign it.

Sometime in the 1990s, Dallas County Commissioner John Wiley Price purchased the rights to the book, hoping to get it back on shelves. There were no takers. Then, sometime later, when Schutze tried to get the rights back, Price refused to turn them over. Their relationship had soured.

“He and I fell seriously on the outs,” Schutze said. “We’re not speaking. The last time I was in his presence, he turned his back and said to someone, ‘Is there a skunk around here somewhere?’ So, we’re not on good terms.”

The book is available online for $390.

In their hour-long discussion, the pair touched on a range of topics concerning race, male perceptions, growing up in Garland, morality, segregation, the State Fair of Texas, and the naming of a highway after a member of the Ku Klux Klan, R.L Thornton. Through it all, the relevance the book still contains was apparent. Although Dallas is making incremental strides, the city remains segregated. Politicians still try to hand over deals to their friends. Others take bribes, selling out the city’s poorest in the process. For that to change, Dallas must change.

“No one is going to just upend the social order if they stand to lose anything,” Harper said. “If there is a social order which benefits them, even if it’s not necessarily like a deeply held, fierce belief that’s at the core of their being, if they are in a place that they have an advantage, it’s easy just to ignore the rest.”