Former City Council member Carolyn Davis pleaded guilty this morning to accepting $40,000 in bribes from a developer while she was chair of the city’s housing committee. That developer is Ruel Hamilton, who was also indicted, and whose name you might know for steering thousands of dollars in campaign contributions to City Council members under the names of his grandchildren. (The city’s ethics code allows for individuals to give up to $1,000 per candidate per election.) His attorney says he will plead not guilty. 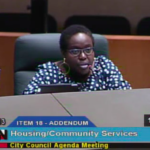 Davis faces up to five years in prison and a $250,000 fine. Robert Wilonsky broke the news this morning, and the documents popped up on PACER, which houses federal court docs, a little after 9 a.m. This isn’t the end of the case, either. Hamilton’s indictment also includes a $7,000 bribe to “Council Person A,” who, the indictment only says, is “an individual known to the grand jury” and “was at all relevant times a member of the Dallas City Council.” The bribe occurred on August 3, 2018. There is also an unnamed nonprofit that Davis used to try and obfuscate the bribes.

“I do want to reassure the citizens of Dallas that neither of the council members mentioned in these indictments or informations are currently serving on the council as of August 2018,” said Erin Nealy Cox, the U.S. attorney for the Northern District of Texas.

Hamilton’s alleged scheme involved paying off Davis so she would lobby one of his low-income housing projects for federal tax credits. The indictment says the AmeriSouth Realty Group CEO wanted his project to qualify for one of the limited 9 percent tax credit subsidies—so named because of the amount the federal government subsidizes in order to stimulate an affordable housing development that would not have been financially feasible otherwise. There are only so many of these awarded each year, and cities must compete against one another to win them. Which is why it’s incumbent upon the city of Dallas to choose the project most likely to win the credits.

This is a standardized process; the projects get scored on a point scale, and those with the most points get recommended. The indictment says Hamilton’s complex was tied in points with another one. And Hamilton had allegedly bribed Davis to get it through. The scheme includes a city housing staffer that the indictment names “Official X.”

“Davis told Hamilton that she told Official X to connect Hamilton with a nonprofit so that Hamilton’s project would get another point in the scoring system, thereby surpassing the score of the other competing project,” the indictment reads.

The project in question is a 168-unit apartment complex known as Royal Crest, located off Illinois and Interstate 45. The indictment says Davis also helped secure a $2.52 million loan from the Dallas Housing Finance Corporation and $168,000 in city funding. On February 25, 2015, the city passed a resolution in support of Hamilton’s project.

From there, the indictment describes a scheme that wasn’t exactly quiet. Davis told Hamilton to write the checks to a nonprofit company owned by “Person A.” That individual would cash the checks and then pay Davis with the money. Hamilton is also accused of giving her cash directly.

“So, I know you wanted the rest of the cash. I have a—probably half of it. I know I have over another thousand bucks or we could do it tomorrow, so —” Davis responded: “Well, it’s up to you … We can wait until tomorrow if you want to.”

“Davis knew that the money was to secure her political influence so she would further [Hamilton’s] development of affordable housing projects,” her plea reads.

Hamilton also promised to hire her on as a consultant at AmeriSouth. Davis promised to lobby for his project in Austin if need be. Davis was in office from 2007 until she was term-limited in 2015. Hamilton didn’t stop, the feds say. In 2018, he approached “Council Person A” and asked them to get a referendum item approved by the Dallas City Council, which “would have resulted in the placement of a referendum item on the November 2018 general election.” It’s not clear what that item is, but Nealy Cox said it was an “issue of importance and interest to Mr. Hamilton.”

Hamilton also had this to say:

“Before you leave office or whenever your last term is, we’re going to have stuff built down there on Eleventh Street. You just watch. I need you for that. I’m saying is, I’m there, you know, and so if there is anything that I can help you with, I mean, I hope you feel like you can reach out.”

“What should I put down just for posterity sake, down in here for, what should I say?” Hamilton is quoted as saying. “All right. I just wrote something down there just so … some — somebody ever asks, I can come up with some kind of reference.”

Hamilton’s attorney, Abbe David Lowell, maintained his client’s innocence in a statement. His co-counsel called the investigation “a misdirected trap.”

“Prosecutors make mistakes all the time,” Lowell wrote. “Today, they added to the list by staging a set-up to trap and then bring charges against my client Ruel Hamilton. People in this city know Ruel to be a pillar of the community, a fierce advocate for civil rights and fairness to working people and an honest man. When this case is heard and the truth is known, Mr. Hamilton will be exonerated and we will look forward to our day in court to defend him.”

Hamilton’s AmeriSouth address is well known at City Hall. Since 2015, city records show that he and his family have given $44,000 in total to former, current, and hopeful City Council members. As stated, individuals can give up to $1,000 per candidate per election. In 2016, his 3-year-old grandson gave $1,000 to North Oak Cliff Councilman Scott Griggs, who is running for mayor. His similarly aged twin granddaughters gave $1,000 donations to former Dallas City Council member Tiffinni Young and current Councilwoman Carolyn King Arnold. (Griggs has returned his donations.)

Young got $10,000 from Hamilton and his family in 2015, with the contributions originating from AmeriSouth’s 325 N. Saint Paul address. Other recipients of Hamilton and his family’s generosity include council members Kevin Felder, Tennell Atkins, Casey Thomas, and Philip Kingston. None of this is illegal, but city ethics rules mandate that the donor must own the money him or herself and decide to give it on their own accord. Can a 3-year-old do that?

The other sad thing here is the challenge of affordable housing in this city. For years, many of them while Davis chaired the housing committee, the city of Dallas spent its federal housing funds by sending all of it south of the Trinity. This practice concentrated poverty in areas that lacked basic services and job opportunities. It’s tough to get to your work when you don’t live near them, especially if you don’t own a car. Some of these housing developments went into neighborhoods that don’t even have a grocery store. The allegations against Hamilton show a man who knows the game, and how to play it. And he found a welcome partner in Davis, who was all the more happy to perpetuate the decisions that have created a stark line of inequality in this city.