Last week, Peter wrote about a rendering by the New York-based artist Jake Berman of our expansive streetcar network as it existed in 1919. It took you all over the city—East Dallas to Winnetka Heights, Fair Park to Oak Lawn, Highland Park to North Oak Cliff. The piece was popular on Reddit, and there have been subsequent requests for Berman to create another map showing the existing DART light rail system to compare it with. (And, yes, don’t come for us Redditors, we got permission from Berman to use this.)

It will make you sad. 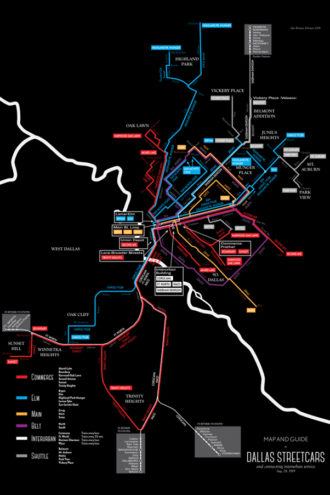 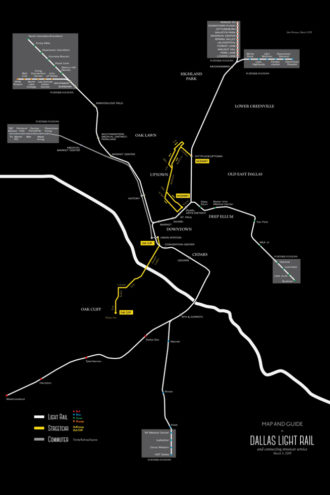 A map of what Dallas current rail system looks like, with the white representing the DART rail and the yellow being the two minor streetcar lines. (Credit: Jake Berman)

On the left is the 1919 map, with the dense streetcar network. On the right is what we have now, the DART rail in white and the minor streetcar lines in North Oak Cliff and Uptown in yellow. You’ll see that many of the interior neighborhoods are left unserved by any type of rail, despite there having been tracks through them a full generation before. It’s not DART’s fault, either. They weren’t the ones who put in the freeway system that separated neighborhoods from one another. But it does show how priorities of transit planners changed over the course of a generation. As Peter noted in his column that went online today, the region more than doubled in population over the last 40 years. The city of Dallas has only gained 440,000 new residents. That’s a sign of how well sprawl has worked, and public transit followed a similar formula to our highways.

DART built along freight lines, which created a network that stretches 93 miles across the region. It is inefficient to use within the city itself, but it’s a dream if you’re looking to get to escape the city center without using your car. And, sure, we don’t know frequency from back then and it’s not clear how reliable the trains were. But the layout reveals a hope that it wasn’t always like how it is.