A piece of the airport ecosystem you might not have previously considered is the airport catering worker. They toil behind the scenes, cooking up meals that are taken aboard planes and served to passengers. And at DFW International Airport, many of the ones servicing American Airlines are calling for better pay.

According to a labor union representing the hospitality workers, the workers’ median wage is $11.40 an hour, with pay starting as low as $9.85 an hour. Only about half the workers have health insurance, and premiums can top $500 a month for those who do. That has prompted a cohort of City Council members and candidates to speak out on the workers’ behalf. Massachusetts Institute of Technology’s widely used living wage calculation pins the minimum hourly rate at $11.71 for a single adult. Add a child and that balloons to $23.99.

“As an owner of Dallas/Fort Worth International Airport, the city of Dallas has a direct interest in making sure our airport does not create poverty for our residents,” writes Uptown and downtown Councilman Philip Kingston in a letter to American Airlines’ DFW Hub Operations VP Cedric Rockamore.

Workers are asking for $15 an hour and affordable healthcare, and they want a plan to request wage compression—wherein new employees get paid more than older ones. “We urge you to include this commitment in the next Lease and Use Agreement currently being renegotiated with Dallas/Fort Worth International Airport,” reads Kingston’s letter. Sitting Councilmen Omar Narvaez, Scott Griggs, Tennell Atkins, and Deputy Pro Tem Adam Medrano make up Kingston’s “We.”

Nationally, the hospitality union Unite Here represents some 300,000 employees spanning gaming and airport workers. About 18,000 of those work in airline catering, and 825 are part of the DFW Airport-based group Sky Chefs. American Airlines uses but does not directly employ Sky Chefs workers.

A group of about 60 of them say they were turned away at the company’s headquarters in late January when they tried to deliver a letter addressed to Rockamore. The note outlines the statistics regarding pay and healthcare and points out American’s $12 billion in profits since 2015. DFW is American’s most profitable hub, and the airline is expanding there with 100 new daily flights. The group requests a meeting to discuss ending what it calls poverty wages for airline catering workers. They subsequently delivered the letter via regular mail, and they say they’re still awaiting a response. 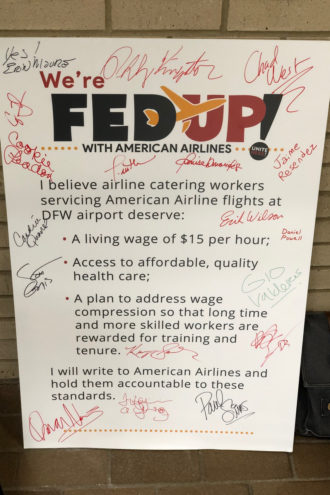 A group of 17 Council members, either present or prospective, pledged their support.

A union rep sent over several statements from Dallas politicians both current and prospective. In all, 17 of them offered support.

“We must care for our workers, “ says mayoral hopeful Griggs, who has been pushing for requiring incoming companies to promise wages of at least $15 an hour. “Our workers make DFW airport great and it is past time to make our workers’ lives greater.”

Adds mayoral candidate Regina Montoya: “We have to raise the median income in our city and DFW Airport is home to key employers. One of my goals as Mayor will be to get people in position to, for instance, afford a home, or have an easier time covering expenses and rent.”

Council hopefuls such as Tiffinni Young, Erin Moore, Jaime Resendez, Chad West, and Giovanni Valderas also contributed support. Paul Sims is quoted in the release, too, although Sims dropped out of the District 9 race. So, I guess it’s 16.

American Airlines didn’t respond to a request for comment.

The City Council in recent years has advocated that its partners increase wages for their hourly workers. It was a negotiation point in privatizing Fair Park, and the operator, Spectra, agreed to use MIT’s living wage calculator to adjust wages each year beginning in 2020. The city also uses MIT’s calculator to determine wages for hourly workers at City Hall. And an Amazon warehouse that last year got the council’s approval in West Dallas will pay its hourly workers a minimum of $13 an hour; the average for the 1,500 employees will be $15. The catering workers’ request appears in line with these trends.

Meanwhile: maybe if Dallas, Fort Worth, and American agreed to sell the operations at DFW Airport to a private operator that this sort of thing could be negotiated upon in the initial terms.

Pay No Attention to the Fire at DFW Airport

EXCLUSIVE: What the Other American Airlines Logo Finalist Looked Like