The solution depends on rethinking local control and property taxes.
By Kathy Wise | March 7, 2019|9:23 am
Advertisement 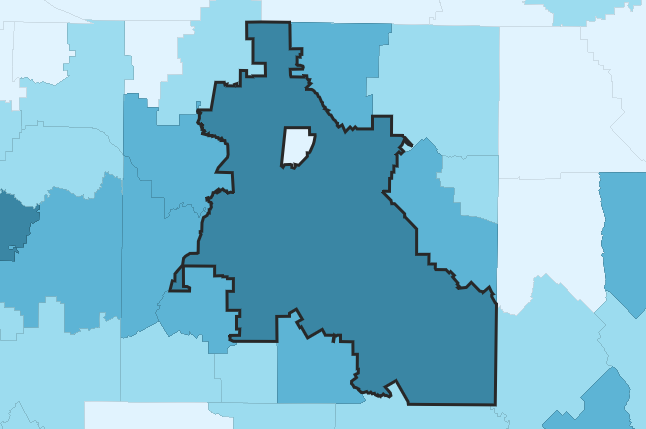 School segregation is bad–and illegal. But a new report from the nonprofit EdBuild argues that because school district borders are drawn along municipal lines that represent years of residential segregation, kids end up going to “racially concentrated” schools that are not only segregated in fact but receive $23 billion less nationally than white districts serving the same number of students.

In looking at Texas, the study finds that predominantly nonwhite school districts have 7 percent less funding on average than predominantly white school districts. You can also look at DISD in particular. A screen shot of the school district is shown above, colored dark blue to indicate a 2016 student poverty rate of 30 percent. The light spot, of course, is Highland Park ISD, with a student poverty rate of 5 percent. DISD is 95 percent nonwhite; in comparison, HPISD is 14 percent nonwhite.

The study also addresses issues of secession, when smaller towns or neighborhoods seek to remove themselves from a larger school district, as East Dallas once considered. But the study concludes that the historic notion that education should be rooted in local control and funded through property taxes reinforces racial discrimination and economic inequity, meaning that things won’t improve until we change the framework. It’s worth a read.

The school will be named for a longtime booster of Fort Worth as it graduates its first class of medical students.
By Will Maddox
Education

The principal is a former medical doctor turned educator, and the school opens this fall.
D Magazine Directories