The Most Politically Active Children in Dallas

The city of Dallas’ portal for looking up campaign finance reports can be a little tricky. So, to help you out, here’s a screen shot of a search for all donors named Stanton: 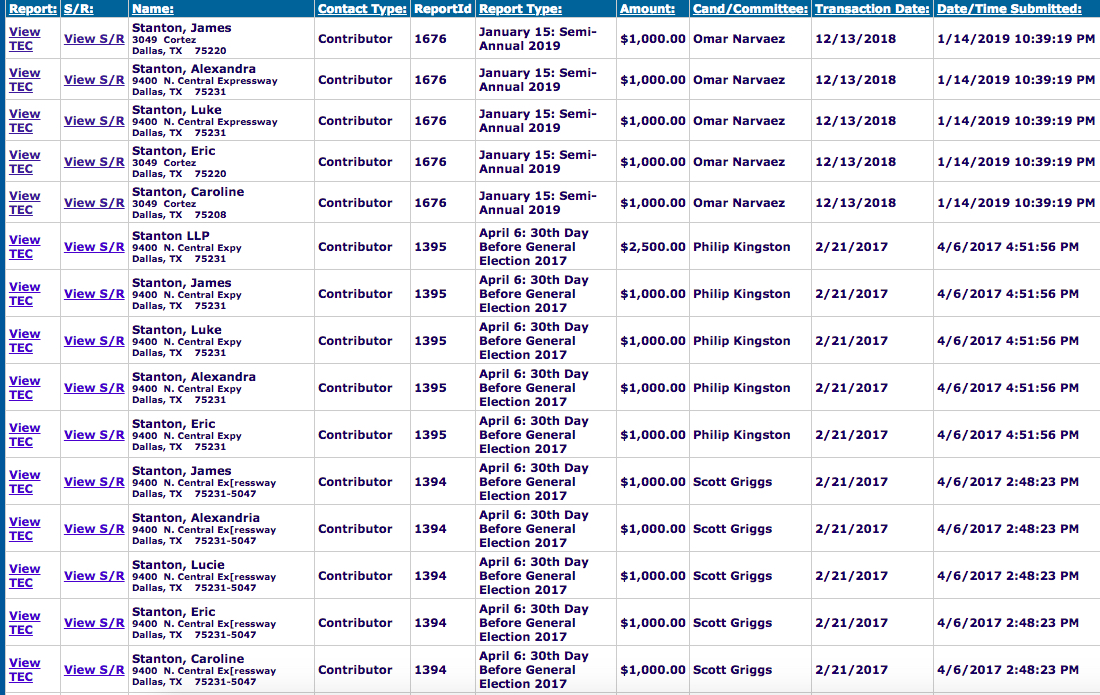 James Stanton is a lawyer and former judge. Presumably he knows that the limit for City Council elections is $1,000. The other Stantons on that page are his four children, pictured above in a January 11 post that Stanton made on his Facebook page. The Stantons are posing with Councilman Omar Narvaez, to whom the four Stanton children each contributed $1,000 on December 12. We know those are his kids because he names them on his law firm’s site. As you can see, the Stanton kids are active donors. They’ve also given thousands to Councilman Philip Kingston and Councilman Scott Griggs, who is running for mayor.

I’ve contacted Narvaez, Griggs, and Kingston for comment. Only Kingston has so far gotten back to me — but that correspondence, via text, was not much help, other than that it confirmed he knew he was receiving campaign contributions from children. Are these donations illegal? No, they are not. They’re just super icky.

Victoria Farrar-Myers is a lecturer in political science at the John G. Tower Center for Political Studies at SMU. When I described for her, in general terms, what was going here, she told me how such “bundling” of donations might be done by, say, a law firm. When I told her we were talking about a kid who was 5 years old, she was surprised. “This violates the spirit and intent of the law,” Farrar-Myers said. “But what’s ethical and what’s legal are two different things.” She also said she is not aware of any case law at the state level on this issue.

Here are the federal guidelines for minors making political contributions. In short, the money has to be given knowingly and voluntarily by the kid. The kid has to actually own the money. And the contribution can’t be made using money that was given to the kid as a gift for the purpose of making the contribution.

James Stanton didn’t return my call. He did respond to an email, though, in which I posed four questions, the first three about his children, their donations, and their addresses as listed on the campaign finance forms. The fourth question was simply to clear up that there’s another James Stanton who practices law in Texas. He answered only the fourth question.

Britta Stanton, James’ ex-wife, is also a lawyer. I called her to ask about her children’s robust political donations. She was very much amazed. As for whether her kids were willingly and knowingly giving the money, whether they actually owned the money, and, if so, what the source of their cash was, after some conversation on background, she was forced to demur for the record.

The youngest Stanton child is 5 years old. I have serious questions for her.

The Blue Cross Blue Shield of Texas president talks about his biggest risks, his days working road maintenance, and the one thing on his bucket list.
By Will Maddox
Media

No, There Are Not 10 Joe Bidens

The newest, nuttiest conspiracy theory has its origins in Dallas. Of course.
By Tim Rogers
Local Government

After losing his bid for city council in 2015, White reached out to his opponent to find new ways to serve his community.
By Peter Simek
D Magazine Directories