As it enables the next generation of cell phone connectivity, which comes with lofty promises to be much faster than even your at-home internet, the city of Dallas is trying to avoid an eyesore problem. For a fully built-out 5G network, the city will need some 10,000 small cell sites. It’s not like previous generations, which required only the big towers. But if you were listening closely on Wednesday during a briefing of the City Council, Dallas Assistant City Attorney Don Knight snuck in an interesting point about the small cells.

As it turns out, he said, they’re not that small.

That simple fact brings up a host of questions the city will have to grapple with moving forward. What sort of deployment approach should we take? Do we add boxes to existing utility poles or tear the old ones out in favor of poles wide enough to hide the equipment inside? Since we’ll need more poles anyway—a lot more—is there an opportunity here to add smart poles, with smart lighting and cameras? Do we want the cameras? In what areas of the city should these smart poles go? Do we want them in our parks? On our trails?

Here’s something the city has going for it: the cell phone providers will be paying for the poles—in the cases of smart poles, we’re talking as much as $14,000 to $20,000 per, according to staff. The poles will then belong to the city. So far, Dallas has approved 551 applications for small cell sites—almost half of those from AT&T, as the carrier makes its home base one of its points of emphasis.

Here’s something the city does not have going for it: Because of a state law passed in 2017 that deals specifically with small cells, the providers will get a discount on their use of right-of-way.

“We know that they forced this down our throat by going to the state and lobbying against us,” said Council member Mark Clayton.

From an AT&T explainer video

On Wednesday, some Council members could see the good in the scenario, which is what city staff seemed to be selling. Free poles! State law allows only lax city regulation of small cells, so the thinking goes that we might as well spin the situation into some new lighting and make the city smarter.

“They are making a pretty decent contribution to our community as far as aesthetics,” said interim Public Works Director Robert Perez.

But others were more skeptical. Clayton, who represents East Dallas near White Rock Lake, peppered staff with questions about deployment in the parks. Those appear, in Clayton’s estimation, to be a place where the city has a fighting chance against the pole onslaught. Yet he was being sold by staff on this great idea of new smart lighting in parks.

“Is this a solution that found a problem?” Clayton said. “Is it that, OK, we’re already doing this, so let’s put it everywhere because they’ll pay for the pole and a park seems like a natural thing to do?

“Parks are the only thing we can protect and keep natural. They’re already doing 10,000 of these, of course they’re going to want to go into our parks.”

Natural beauty is one thing. There is also the question of equity, a conversation in which it is difficult to get very large corporations to actively engage. City Manager TC Broadnax and Mayor Mike Rawlings said the city is talking with the AT&Ts of the world about how to make sure that southern portions of the city, such as South Dallas, are not left behind. 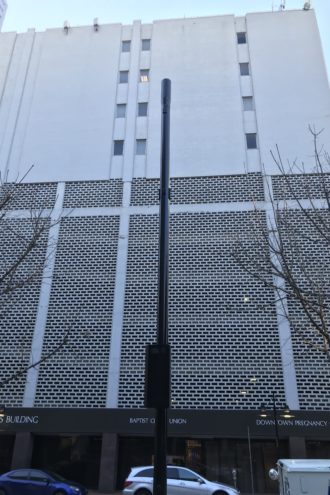 But South Dallas Councilman Kevin Felder was not happy with the map showing the smart pole pilot. None of the poles were in South Dallas near Fair Park. “That’s a problem, sir,” he said. “That’s a problem, staff.” He already takes calls on his cell phone physically outside his office at the Martin Luther King, Jr. Community Center because he isn’t able to get service inside the walls, he said.

“We’re not going to be two generations behind,” he continued. “This is 5G. South Dallas, District 7, has 3G.”

Philip Kingston, Council member for downtown and uptown, is not what you might call optimistic that these sorts of gaps are going to be filled in. In Kingston’s estimation, the cell phone providers already won the freedom not to equitably deploy 5G coverage at the state level. (Freedom that providers are winning in other states, as well.)

“The mismatch between what these people intend to do in terms of taking away valuable right of ways as opposed to providing service in an equitable manner should turn our stomachs,” he said.