In Dallas-Fort Worth, 1,037 people were struck and killed while on foot over a 10-year period ending in 2017, making it the fourth-most dangerous metropolitan area in Texas for pedestrians, according to a new study. That’s about one pedestrian death every three and a half days.

Titled “Dangerous by Design,” the wide-ranging data dive from Smart Growth America shows that, while fatalities for vehicle occupants decline, there’s an increasing risk for pedestrians across the country. There were 4,100 pedestrian deaths in 2009, compared to about 6,000 in each of 2016 and 2017. 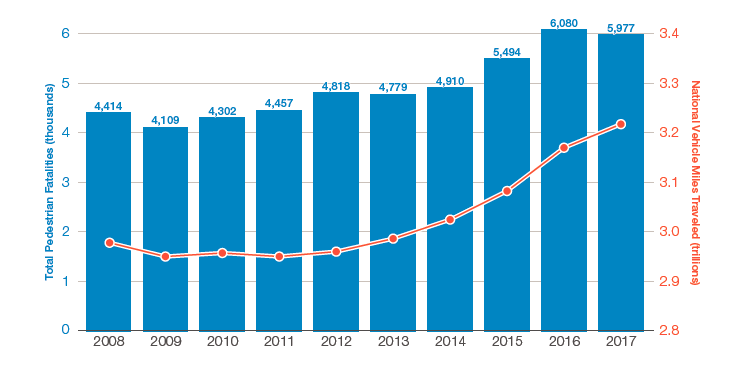 DFW’s “pedestrian danger index,” (PDI) a rating of the number of pedestrians killed per capita that factors in an area’s propensity for walking to work, increased from about 110 to 124 over the 10 years, on par with the increase in Austin—which has a lower PDI, at 92.

The McAllen and San Antonio metros, which the study says are Texas’ worst cities for pedestrian safety, were also home to Texas’ largest increases. San Antonio increased 27 points to 131, while McAllen was up 22 points to 141.

One of the larger takeaways is that pedestrian safety is a particular issue in the south. The lower third of the country contains 19 out of 20 of the most dangerous cities. Florida is an awful place to walk, taking eight of the top 10 spots. Orlando, with an index of 313, sits atop the list.

Overall, Texas is the eighth-most dangerous place to be on foot, up a spot in the last three years.

You’ve probably seen our Dallas Hates Pedestrians series by now. Much of our distaste with the way our city treats walkers stems from an inability to get from point A to point B. This study reminds that there’s a safety factor, as well.