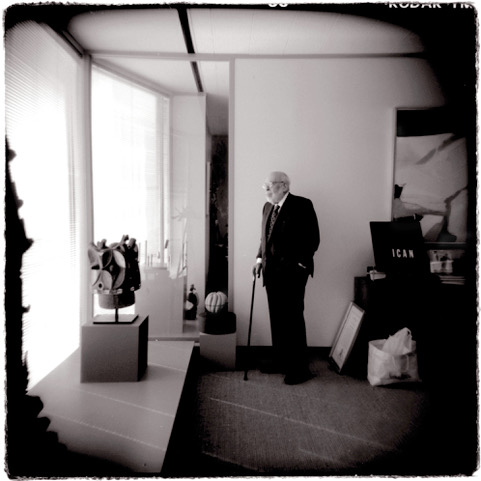 For local restaurateur Shannon Wynne, a two-story tribute to Stanley Marcus is not enough.

Wynne recently commissioned artist Brent Hale to paint a giant black-and-white mural of the larger-than-life man, smoking an oversize cigar, on the side of one of his properties in The Cedars, the historically Jewish neighborhood where Marcus grew up. “I just wanted to do a tribute to Stanley because his family grew up in the neighborhood and nobody’s done anything,” Wynne says. “And that got me to thinking. It’s led into the whole effort to get Lee Park renamed Stanley Marcus Park, which I’m working on now.”

After the city removed the statue of Robert E. Lee in September, the Dallas Park and Recreation Board voted to return the park to its original name, circa 1936: Oak Lawn Park. But Dallas Park and Recreation Board president Bobby Abtahi says the name is simply a placeholder until an official naming occurs. So far, no one has submitted a formal application to rename the park.

There was a proposal on Change.org to rename it Erykah Badu Park, but that won’t pass muster. The rules require that in order to name the park after a person, said person has to have been deceased for at least 2 years or be over the age of 70. Too bad for Badu.

Wynne argues that Marcus, on the other hand, is the perfect choice. He’s sufficiently dead, and he meets the second prong for a personal renaming: “The individual contributed direct and significant service for the betterment of the community and/or the Park system for more than 25 years or two-thirds of the person’s life span.”

“Let’s have a park named for someone that has done more for the City of Dallas culturally than anybody ever in the history of Dallas,” Wynne says. “The name Neiman Marcus is in Broadway shows. During the ’40s, ’50s, ’60s, and ’70s it has been the icon of Dallas fashion and culture. Stanley put an otherwise desperate little prairie town on the map. And nobody’s done anything for him of any consequence.”

Marcus’ granddaughter, photographer Allison V. Smith, agrees that it’s time for a grand gesture. “People want him back. He’s been gone for 17 years—as of this week—and nothing has been done. Mom will say he didn’t want anything, but it’s time,” she says. “The park is in the heart of the city; it’s the gem in the middle of the city. It makes perfect sense—his mother, Minnie, lived right there.”

But some Turtle Creek residents take a different view. Gay Donnell, president and CEO of The Conservancy, which operates and manages Arlington Hall and Oak Lawn Park on behalf of the city, says that residents have told her that it should be called Turtle Creek Park. Although The Conservancy has not yet filed an application to rename it, Donnell says they have already taken steps to rebrand themselves as The Turtle Creek Conservancy.

“I would think that after everything we’ve been through, that everyone is comfortable with a name that reflects where the park is located,” Donnell says. “The name carries value. The real estate community is behind it. It has the support of the neighbors. We’re ready.”

“The park’s name has been embroiled in a national controversy, but we need to remember that it’s still a neighborhood park.” Abtahi says. “We  want to know how the surrounding neighborhood feels.”

Wynne is confident that neighbors will come around to his vision. “We don’t need another thing named Turtle Creek,” he says. “Let’s give it a breath. What has Mr. Creek done for Dallas?”