Last time, we explored how former Dallas Mayor Laura Miller has led the charge to stall redevelopment in Preston Center. We also saw how Miller’s battles with Councilwoman Jennifer Gates have spilled into a tit-for-tat battle on Twitter. Today, we take a look at Gates’ efforts.

As noted, within three months of the city adopting the Northwest Highway and Preston Road Area Plan (which is not legally binding) the Preston Place condos burned down. That plan called for minor changes to both Preston Center and the Pink Wall’s existing zoning while leaving Preston Hollow’s single-family areas untouched.  Once the fire was out, the residents decided that rebuilding would be financially impossible and looked at their options. They uncovered Planned Development District 15. PD-15 dates back to 1947, when the entire Pink Wall area at the northeast corner of Northwest Highway and Preston Road was owned by the Prather family—who also developed Highland Park Village. At the time, it was zoned for commercial construction.

In the 1960s, when the city was formalizing its zoning and initiating planned development districts for exception zoning, much of the Pink Wall had been developed into two-story apartment buildings. Those were categorized as MF-1, allowing a maximum of three stories. Undeveloped at the time was the northeast corner of Northwest Highway and Preston Road, specifically the area between Preston Tower and Athena high-rises. This is likely the reason they escaped the deed restrictions placed on the rest of the Pink Wall.

As PDs go, PD-15 is old and odd. It’s the 15th one the city ever designated, and the specifications are a scant four pages with a couple of surveys. A PD today might be 10 times as long, providing a lot more detail and intent. PD-15’s brevity leaves a lot of room for interpretation.

Preston Place discovered that their only option would be to rebuild exactly what was there, even the exterior. That’s a project that, 40 years later, isn’t economically viable. But any change would require the PD to be reopened. The issue PD-15 has that most others don’t is that it caps residential dwelling units for the district. While other PDs can seek augmentation via a zoning case, this one can’t because changing the cap requires opening the PD and changing the limit. In over 50 years, it’s happened only once, after a high-rise was proposed in the 1970s for Preston Place.

Today, the options are:

In July 2017, Gates held a neighborhood meeting at Christ the King church. It attracted between 150 and 200 residents. Representations from multiple city departments were on hand to answer questions. At the end when a “show of hands” vote was taken, easily 90 percent of attendees wanted the PD reopened and accommodations made for the passage of time.

Shortly thereafter, Gates formed a committee with representatives from each of the six buildings within PD-15 plus a few folks from the surrounding neighborhood. (Full disclosure, as a PD-15 resident, I was an early member of the committee.) It became quickly apparent that the towers didn’t want any increase beyond the four-stories contained in the Northwest Highway and Preston Road Area Plan, which was largely authored by Laura Miller. Note: Even were four-story construction agreed upon, the PD would still have to be opened to accommodate it.

Feeling their obstinance wasn’t being respected, representatives from Preston Tower reached out to Miller to pull her into the process. In November 2017, I resigned from the committee because I was expected to sign a letter written by the then Athena HOA president and Laura Miller. It demanded Gates reaffirm Miller’s area plan, withdraw PD-15 from the authorized hearing queue, and demanded the towers get outsized representation.

The towers’ inflexibility meant the required unanimous approval wouldn’t happen. The meetings abruptly stopped. Another reason for stopping was that because of the Preston Place hardship, the authorized hearing would begin in months rather than a year; that city-run process didn’t require unanimity.

On April 26, 2018 Gates kicked off the authorized hearing process to try and broker a deal between the neighbors to provide PD-15 with an economically viable way to redevelop and fulfill the overwhelming desires of the initial 2017 meeting. 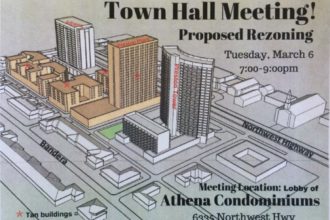 The month before the initial meeting, the towers held their own meeting to scare residents and incite opposition. The graphic above was pilfered from a “what if” session conducted during the first committee; many thought it was an actual proposal.

The April kick-off was attended by supporters and opposition (more opposition than the initial July 2017 meeting). Non-resident Laura Miller literally waved a rejected low-ball offer from her friend Leland Burk for Preston Place. Miller said Burk’s deal would not require any increase in density or height and that Preston Place residents were just greedy for not taking it. However, Burk told more than one city staffer that while his (1/3 lower) offer wasn’t predicated on a zoning change, he wasn’t interested in rebuilding what was originally there either.

Gates asked residents wanting to serve on the new committee to contact her office. Her only caveats were that those from the original committee would not be reselected (because they’d already proven they couldn’t compromise) and those wanting to kill the process would not be selected. Made perfect sense to me.

Over the ensuing months the new committee met roughly twice a month. The first sessions were spent educating lay people on PD-15 and the intricacies and considerations of zoning. After all, you have to know the current conditions and what’s possible to change. It’s important to know that while Miller never showed up at any committee meetings, she was busy trying to kill it from behind the scenes. 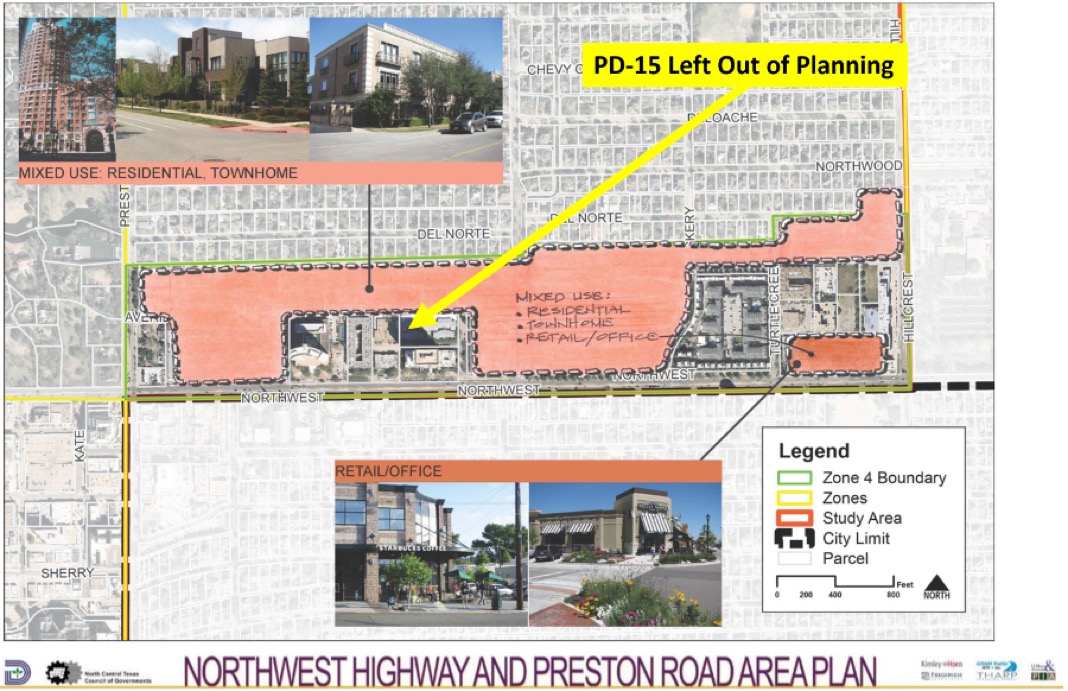 The “no” campaign met with committee members whenever they were allowed and sent incendiary “doom and gloom” emails rife with inaccuracies to committee members and city staff seeking to stop the proceeding – which would essentially leave Preston Place owners paying mortgages on cinders. They also met with Gates on more than one occasion. Their default “setting” was adherence to the Northwest Highway and Preston Road Area Plan.

Ever since the Preston Place fire, Gates has sought to create a forum where neighbors could reach an agreement on how to proceed. Realizing some thought she was pushing an agenda, she largely stayed away letting city staff run them. Unfortunately, this second committee also devolved into the towers versus the low-rises.

In early November, Gates halted the stalled committee again, sending them home until January. In the meantime, city staff will be evaluating the PD and crafting their own recommendation.

Turns out there’s nothing like adult oversight to get the kiddies in line. During the hiatus, the committee members, fearful of the city’s recommendations, have been meeting furiously to craft their own compromise.

Gates is doing her best to protect needful constituents from the unthinking masses. On January 7 we’ll see what both the adults and the children have done at the Walnut Hill Recreation Center beginning at 5:30 p.m. Public invited. The recap will be posted at CandysDirt.com the following day.

At the center of Preston Center sits a disheveled 2-story parking garage. The Northwest Highway and Preston Road Task Force identified it as a major impediment to revitalizing Preston Center. Through a convoluted series of events, the city of Dallas owns the land and must provide parking for Preston Center. But what gets built rests with the landowners surrounding the garage – known as the Preston Center West Corporation.

A goodly proportion of Preston Center landowners have inherited property purchased two or three generations ago. Rent checks are the trust fund to operate their lives. Currently, the checks are enough. They’re not looking to interrupt the gravy train even if it meant doubling the rent their property generates (in line with Preston Center East rents). That’s a problem. 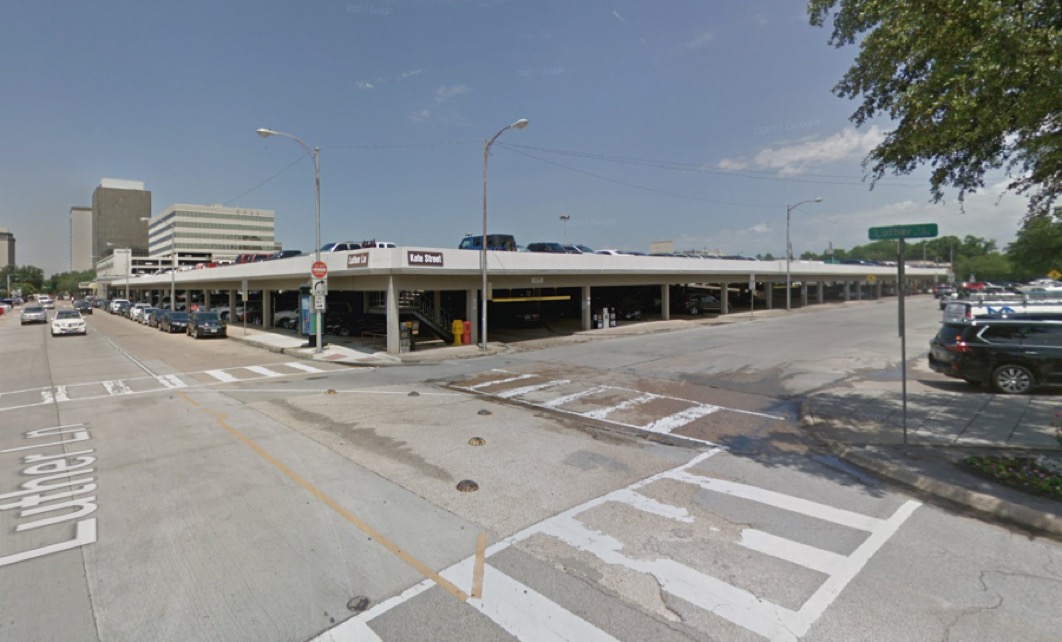 Redeveloping the garage will interrupt Preston Center; that’s what all large construction projects do. That explains why at Gates’ first garage committee meeting in September, the best option, burying the garage with a park on top, received “low” support by the Preston Center landowners. It also explains the “high” support for a new all above ground garage and a possible partial park with a partially above ground garage; above-ground is faster to build.

Not prepared to perpetuate the horribleness of another above-ground garage, Gates is working all the angles that don’t have strings attached.

Like PD-15, Gates has assembled a stakeholder working group consisting of four members of the Preston Center West Corporation and four from the community including Betsy del Monte – who opposes St. Michael’s and All Angels’ proposed development blocks away, which would put two high-rises, one office and one apartment, on the Frederick Square block north of the church.

In addition to PD-15 and the garage, Gates is working a number of transportation issues including the exploration of new Tollway ramps at Walnut Hill, storm water mitigation, a Texas U-turn at Northwest Highway and the Tollway (which I personally think is unworkable).

The next public meeting for the Preston Center Garage Study and traffic mitigation will be on January 31 at the Walnut Hill Recreation Center from 6 p.m. to 8 p.m. [Editor’s Note: We originally had the date wrong here. It’s the 31, not the 30.]

St. Michael’s and All Angels

Unlike PD-15, the Preston Center development district doesn’t have a cap on any type of units. Therefore, when St. Michael’s is ready, they will file a zoning case with the city that will have to pass the City Plan Commission and City Council.

At both CPC and Council, the community will have a chance to voice support or opposition to the project as well as squeeze in pre-session lobbying.

At this point Gates does not support or oppose the project. She wants to research what they’re asking for and hear from constituents.

To me, if St. Michael’s is building the square footage that’s allowed by zoning (just spread over their block), then any protests about traffic (the biggest complaint) will likely fall on deaf ears. Whether allowed density is 200 feet east or west will have no impact on overall traffic patterns. I’ve captured my thoughts already. If significant changes are made, I will review them.

Having watched Gates with incredulity since the Northwest Highway and Preston Road Plan debacle, I can say that I see a representative trying to engage her constituents. I see her sometimes exasperated by an uninformed (or bamboozled) opposition, usually without any workable suggestions of their own. For Gates, it surely doesn’t help when the former mayor of Dallas undermines you at every turn.

I will say that seeing the make-up of various committees under Gates’ leadership, she sure doesn’t stack the deck with “yes wo/men,” as some who disagree with her accuse. She also posts all documents online for everyone to see.

Let her do her work and then judge.