I present to you this photo, taken from Griggs’ Facebook page following the opening of a new counseling office along Tyler Street, in his district.

The curvature of the heel sure is similar. As are the squared toes. And when you look at the right boot, there’s some noticeable wear near where the far right toe would be. That matches the billboard, which is a bit brighter, presumably because of some sort of filter. (You can see it for yourself. It’s visible on northbound Stemmons, just after Market Center, near the Medieval Times.) Griggs has been wearing boots and jeans for years; just look at his more casual, pal-around-the-district Facebook photos.

He hasn’t announced officially, nor has he filed any paperwork to notify the city secretary that he has appointed a treasurer. But those boots and jeans are on-brand, and the rumor of his run—which Gromer Jeffers of the Dallas Morning News today classified as “on the verge of running”—has already ginned up attention in Oak Cliff. An alert FrontBurnervian was sent the mailer posted below. 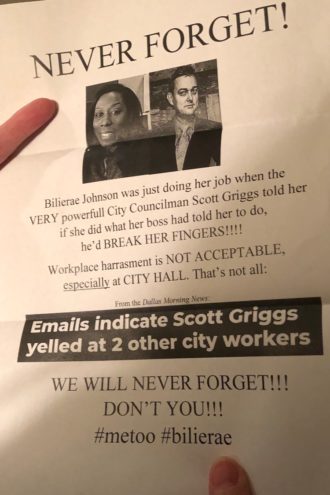 It references the time in 2015 when former City Attorney Warren Ernst went to police and gathered witness statements after he allegedly saw Griggs yelling at the assistant city secretary. That staffer, Bilierae Johnson—who is now the city secretary—didn’t wish to file criminal charges. She told investigators that she didn’t feel threatened, and there were no other witnesses who could recount hearing Griggs actually threaten her. The case went all the way to a grand jury, which declined to indict the sitting councilman.

Anyway. I guess all will be revealed on January 10. All I know is whoever is wearing those boots on that billboard now has to wear them during the event. Don’t cop out with a suit. Be the mayoral candidate of comfort. Maybe stick a leg out from behind a curtain. Or channel Damian Lillard on Christmas day and turn the thing into a leg lamp ala A Christmas Story. Get creative. You’ve already put your legs out there, after all.