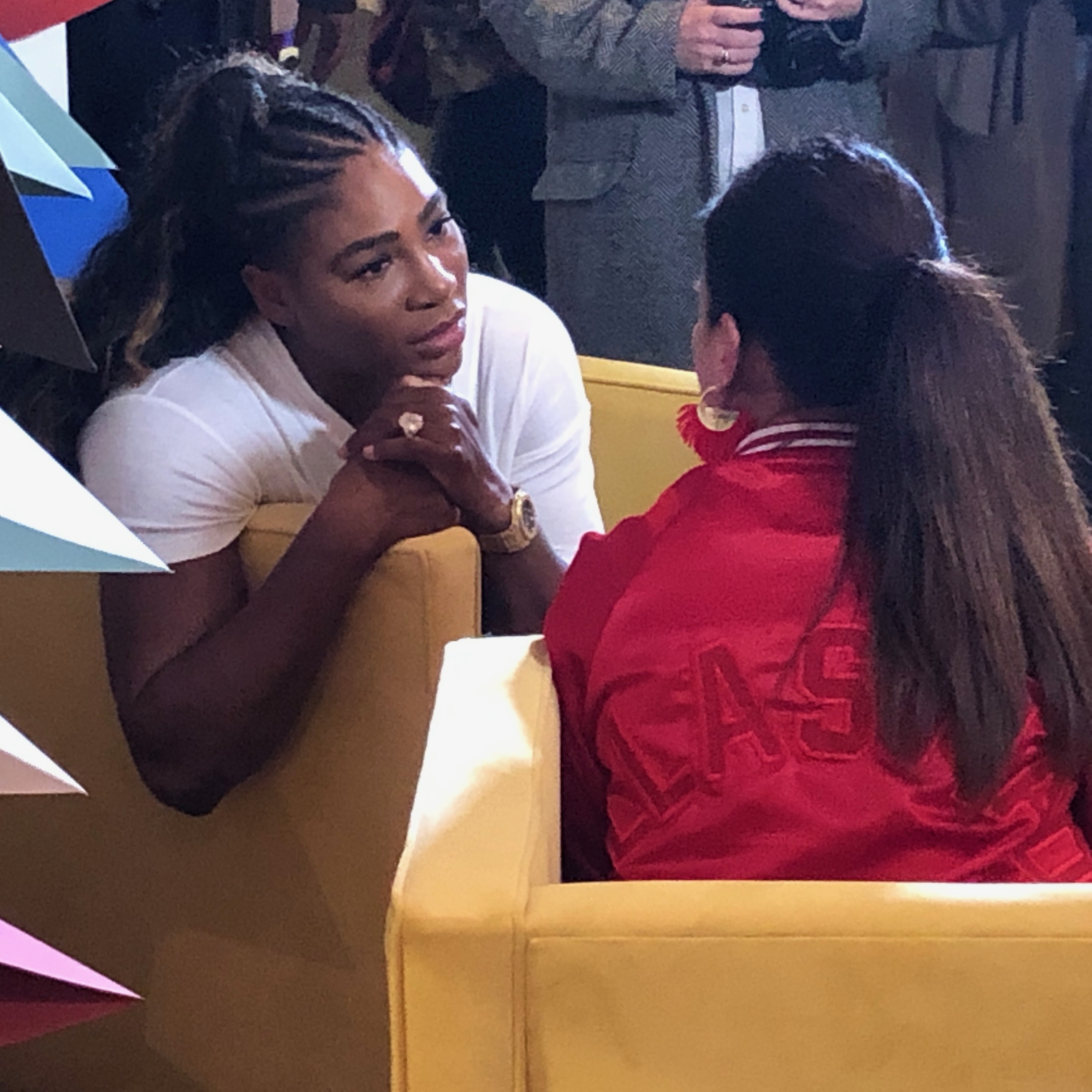 She’s just that into me. Photograph by Melissa Romig.

The first time I saw Serena Williams play, I cried. It was 2009 and I was in NYC for a trademark and copyright seminar. Bored out of my mind during one of the sessions, I decided on a whim to see if I could get a last-minute ticket to the U.S. Open. The heavens shone down upon me, and I scored a loge seat for the night matches in Arthur Ashe for like $100. I hopped on the 7 Subway to Queens, found my seat, they dimmed the lights, and, as the Black Eyed Peas’ newly released single “I Have a Feeling” blared over the sound system and the spotlights chased each other around the arena, Serena took the court. The crowd went wild, and I sobbed like a 5-year-old meeting Elsa on a unicorn made of candy. That song still makes me tear up every time I hear it.

That was the same year that Serena threatened a line judge with physical harm, which I wasn’t cool with. But I soon forgave and forgot, because, in the end, she always gives more than she takes, to both the sport and the world at large. I haven’t missed a U.S. Open since. This past Labor Day weekend, I hovered behind the windscreen of the practice court as she sat just feet away on a bench, laughing with her coach, Patrick Mouratoglou, during a water break. I figured that was the closest we would ever be, and I was fine with that.

Then I got an invite to the VIP launch event Saturday night for her Great Collection at Neighborhood Goods, in Legacy West. Yes, that’s right: the GOAT has gone beyond 23 Grand Slam wins and a Nike catsuit controversy and the Beats “Queen of Queens” video endorsement and marrying that Reddit guy and motherhood posts about teething and being the newest board member of Survey Monkey and showing up to gal pal Megan Markle’s wedding in Valentino trainers to personally stock and style the shelves of a small pop-up shop in Matt Alexander and Mark Masinter’s new take on a department store.

There was a line around the block, and inside the light-filled modern space, servers were walking around with avocado toasts and mini cheeseburgers. Too nervous to eat, I ordered a Serenarita (a beautiful pink margarita made with strawberry and poblano-infused tequila) at the bar and perused the pop-up space. I bought two t-shirts, one with her “S” logo in rainbow colors and a Dallas version with a cowboy boot on it. And then I found a place to stand and wait for The Greatest to arrive.

What struck me most was the crowd. It was as if we were all waiting for some combination of Oprah, the Pope, Barack Obama, Ellen Degeneres,  Mister Rogers, and Santa Claus to arrive. There were black people and white people, black gays and white gays, a brown family with a tiny baby in a red tutu and a gaggle of grown women in black tutus. There were men in homemade Serena t-shirts and kids holding tennis rackets and balls. There were big hats and a lot of spectacular hair. People started randomly dancing and striking up conversations with strangers as Serena’s appearance got delayed. A guy in a camo Hance Taplin jacket came over to compliment my D Magazine limited edition version in red satin, and I turned around to introduce myself to an incredibly stylish couple who turned out to be Jasmine Marie St. James from Maison Saint James and her friend Jackson. No one seemed annoyed. The air was electric. 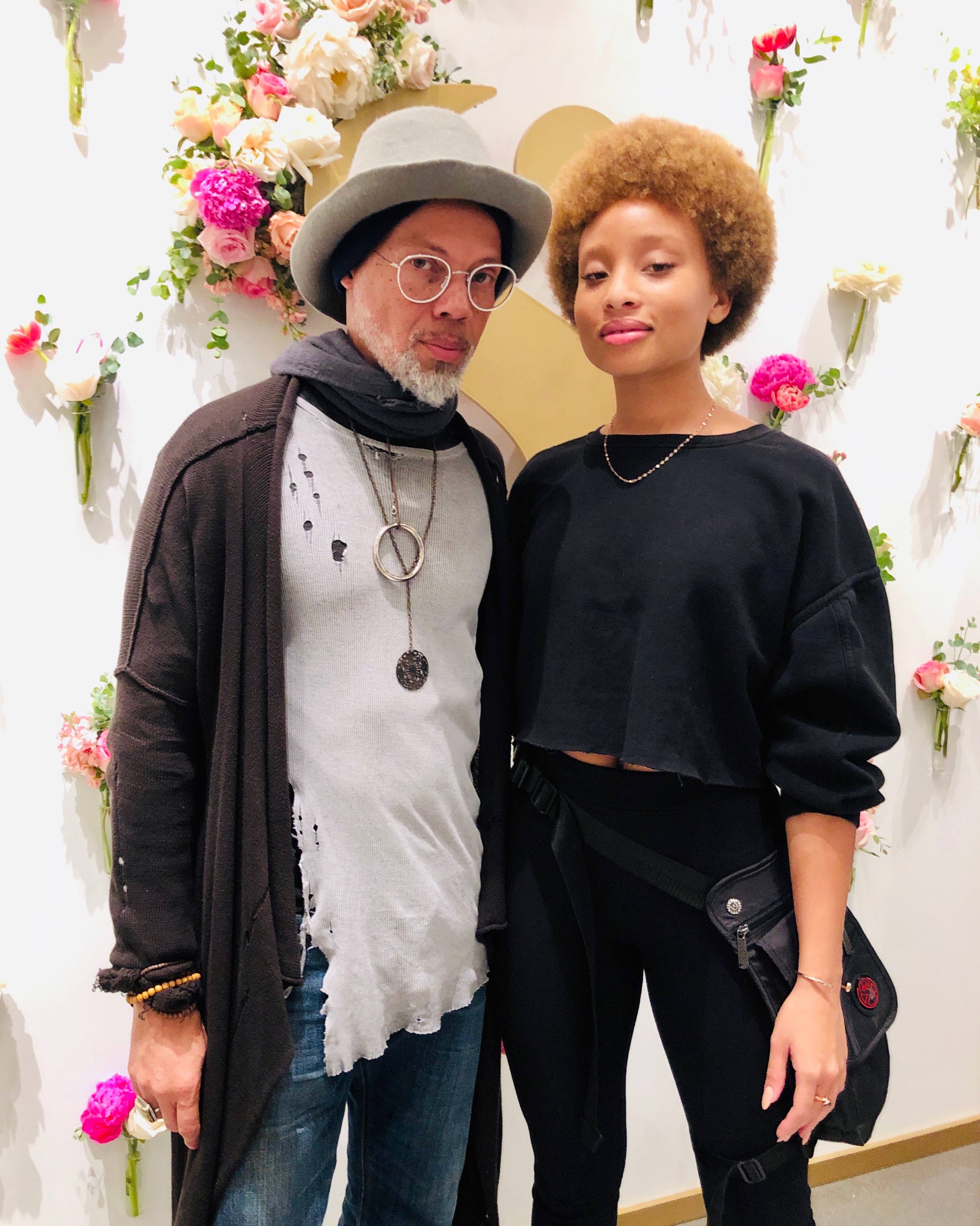 Finally, Matt Alexander introduced the surprise guest, model Ashley Graham, who was wearing one of Serena’s bodycon dresses and was going to interview her onstage for her podcast, Pretty Big Deal With Ashley Graham. The crowd got pretty excited about Ashley, and there were a lot of squeals. Then Serena walked out in the Dallas version of her t-shirt and a sequined skirt, her hair unleashed in all its glory, not doubled up in its usual on-court ponytail, and the audience seemed to go wild and get breathlessly hushed at the same time.

Serena and Ashley talked about karaoke (Ashley’s go-to is Shania Twain) and Serena imitated her daughter, Olympia, doing the Chubby Checker twist. Serena talked about how her new clothing line is small, but that she wanted it to be for Every Woman, and that she doesn’t like the term “plus-sized” so she named her collection “Great” instead. She said the fact that Althea Gibson had to sleep in her car while playing tennis tournaments because she couldn’t stay in white hotels inspired her, and that the person behind Olympia’s baby doll’s #realqaiqai Instagram account is her husband, Reddit founder Alexis Ohanian (just an aside: his net worth is an estimated $9 million compared to Serena’s $150 million). She quoted the Bible (“Humility makes you great”) and talked about deciding to invest in women-owned companies after learning from a talk at JP Morgan Chase that female founders get less than 2 percent of all venture capital dollars.

Then she talked about motherhood. About the trauma of missing Olympia’s first steps because she was at practice, not even a tournament, and how she was embarrassed by her daughter’s tantrums on commercial flights. And she shared that after her coach, Patrick, told her she needed to lose weight and stop breastfeeding if she wanted to win another Grand Slam, a poignant moment portrayed in the “Being Serena” documentary on HBO, that she had a conversation with Olympia about it, and they prayed together, and then Olympia never reached for her after that. Olympia actually got her first tooth the next day, so it all worked out for the best, really.

Then it was my turn. 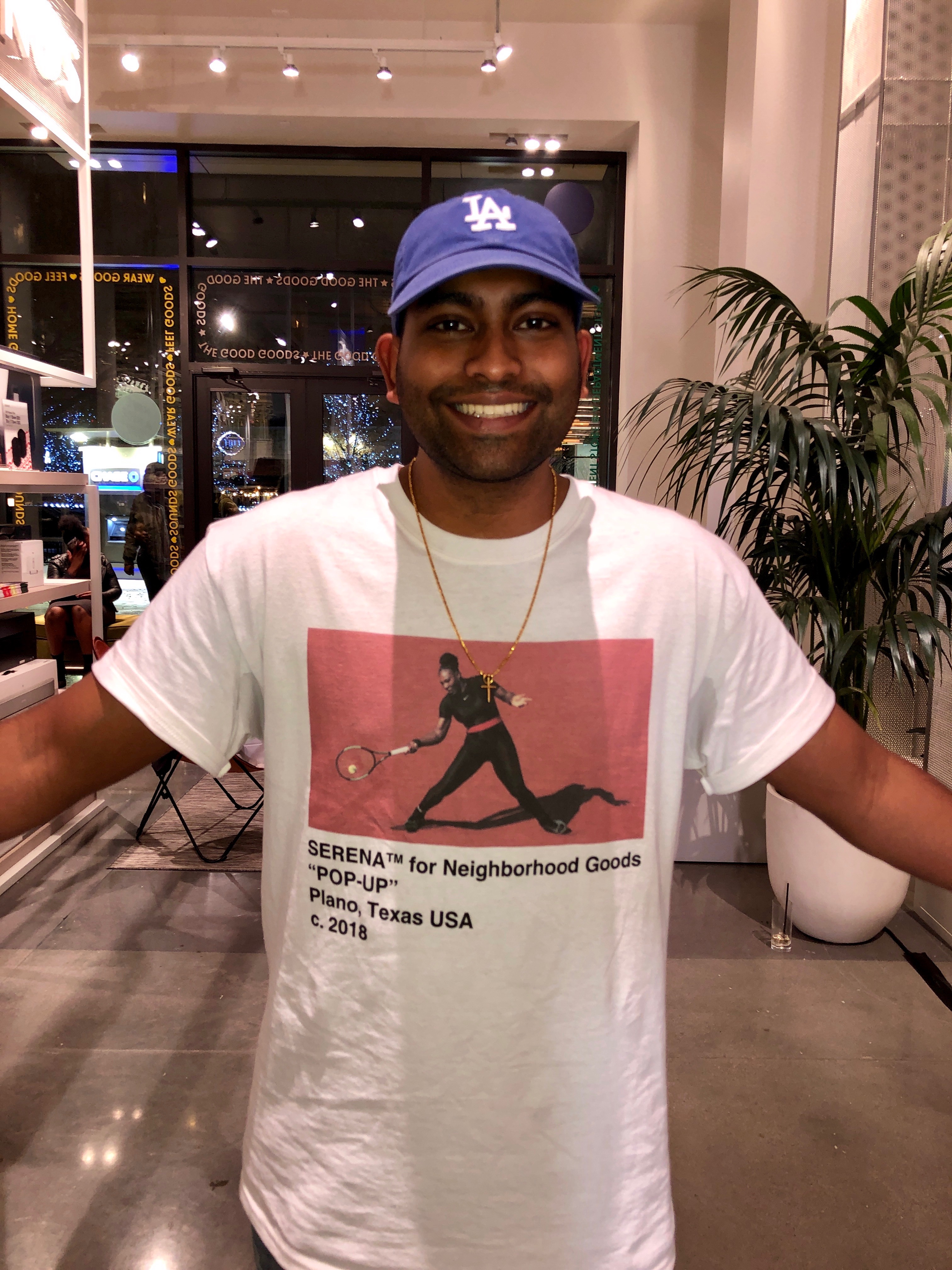 The publicist had told me I would get five minutes, but after Serena spent time shopping with fans and signing autographs, I was told my time would be reduced to three. I stood in the press line until I got my cue. As soon as I sat down, Serena’s assistant asked her if she wanted some water. As people scurried around trying to find her some, she pulled out her phone to check her text messages. Then she turned to me, leaned in, and looked me right in the eyes. And this is what I said:

Me: “Do you want to wait for your water?”

Me: “You need to drink more when you’re traveling!”

Serena: “I know, and I have like half of that.”

That took up about a minute.

Then I asked her why she picked Dallas for the pop-up (because she wanted to roll out her line in a city that she doesn’t play in), if she’s been to the Round-Up yet (she hasn’t), what she thought about collaborating with Virgil Abloh (“He’s so sweet. He’s so humble. It was the best thing I did this year.”), and why she decided to design a denim overall dress with a chain halter when she’s barely old enough to remember when that shit was last cool (“I knew I wanted to do a denim dress with a really strong zipper detail in the back.”).

By then, the publicist was enthusiastically giving me the cut-off sign. So I took a deep breath and rambled something to the effect of, “My tennis team is playing in the Tri-Levels tournament this weekend, and we made it to the semi-finals today, and if we win the tournament, and we win Sectionals in Austin, then the Nationals will be at Indian Wells before the WTA tournament. Will we see you there?”

That’s when her eyes got big and she leaned in real close.