On Thursday, the place that usually covers the protests became the subject of one. About 20 people formed a loose semi-circle outside the glass walls of the Dallas Morning News’ downtown headquarters and, in the wake of activist and former City Council candidate Keyaira Saunders’ loss in a District 4 runoff earlier this month, expressed their displeasure with the city’s newspaper of record. An enormous banner proclaimed it the “Dallas Bigotry News.” The event’s organizer, the Rev. Dr. Jeff Hood, ripped a newspaper in half. Current Council member Philip Kingston, who represents downtown, was there.

At issue for protesters is what they consider a conflation of Saunders’ personal financial history with her character and ability to lead. In its recommendation of eventual winner Carolyn King Arnold, the News’ editorial board revealed that Saunders has previously come close to eviction in Collin and Denton counties. The editorial noted she was a mother of three who had fallen on tough times but concluded: “Nonetheless, we find this troubling.”

Saunders is 29 years old, from battle-tested Flint, Michigan. She says she is representative of the people living in the Oak Cliff district in which she ran. “We expect people that can’t relate to lead us,” she said before the election. “That doesn’t make sense.” That point is further driven home by the response from her community after the editorial was published, which she called, “a little overwhelming.”

On Thursday, activist Olinka Green hit on why the News’ sentiment touched such a nerve. Speaking into a microphone projected by a speaker perched on a stand, Green told the gathering that she has struggled herself. She has slept at the bus station with her two kids. “When you smear her character,” she said, “you smear mine.” Tamara O’Neil called out what she called “selective news” when it comes to reporting on leaders, saying: “The classism has to stop.”

Saunders spoke briefly about her humble beginnings. She said that she knows how to lead, “because I’ve been there.” 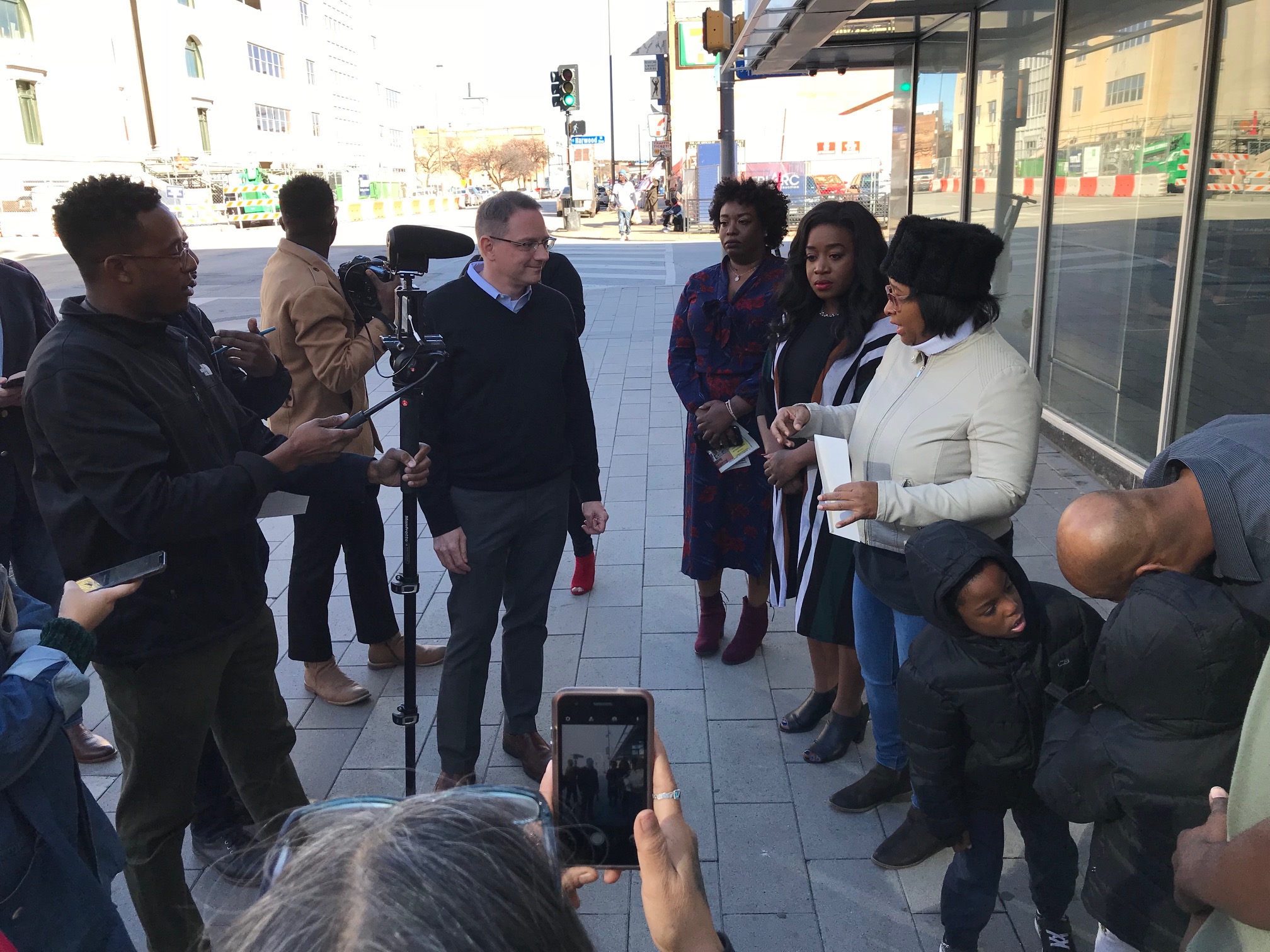 Brendan Miniter, who heads the DMN’s editorial board, met with protesters and invited them to discuss their concerns in detail at a later date.

Then came Dr. Jeff Hood, the local activist who gained a level of notoriety for being the organizer of the 2016 peaceful protest of police brutality through downtown, which turned into something else entirely when a man shot and killed five officers and injured nine others. Hood went through a conversation he had with DMN Editor Mike Wilson on Monday.

Wilson previously sat down with the Rev. Edwin Robinson, the Rev. Frederick Haynes, and activist Dominique Alexander to discuss the paper’s coverage of the fatal shooting of Botham Jean by an off duty Dallas police officer. Hood says Wilson similarly agreed to meet with Saunders and others to hear their concerns. Wilson and Hood at first agreed that Hood would publish an op-ed on Thursday, the day of the protest, that would address his critiques of the paper’s editorial.

But, according to Hood, his copy was deemed too radical. (We have read it as well, and, setting aside the issues with the News’ take on Saunders, it is not a particularly comprehensible telling of the group’s concerns. Draw your own conclusions here.)

But outside the paper’s office, Hood brought up some interesting things he says Wilson told him. In particular, that the almost-eviction history was relevant because if you are poor, you are more likely to commit financial malfeasance in office, to take bribes, and to misspend taxpayer money. “That’s some fucked up thinking,” said Hood. “Poor folks are seen as the enemies of the establishment.”

Wilson and Brendan Miniter, who heads the editorial board, did not respond to specific questions about the editorial.

“Dr. Hood and I had a couple of good conversations and I look forward to more,” Wilson said in an email.

One more person spoke at the protests. It was the activist Dominique Alexander, Saunders’ partner and the co-founder of the Next Generation Action Network, who said he is certain that God will eventually put Saunders at the Council horseshoe.

Saunders will have another shot at it in May, when the seat she lost out on—in a special election to replace Dwaine Caraway, who pled guilty to accepting kickbacks—will already be up for grabs.