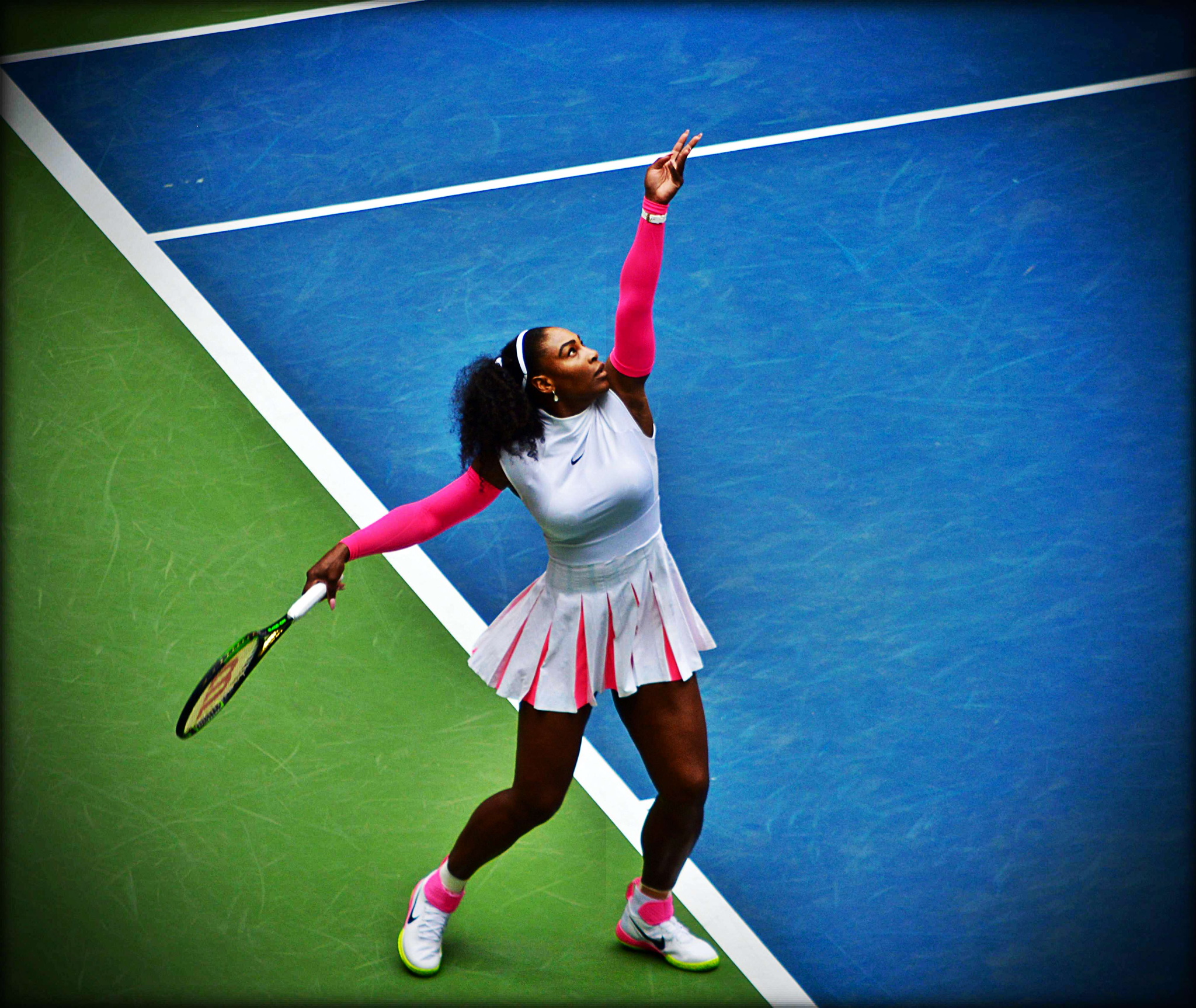 The image my wife took of Serena that I’m hoping she’ll sign on Saturday at Neighborhood Goods.
Melissa Romig

This is a busy week for me. Tonight is the Best New Restaurants event (my favorite D event of the year), tomorrow is our end of year tennis party for the SMU crew, Friday kicks off the citywide Tri-Level tournament (Tim Rogers’ wife and I are making it to Indian Wells this year, btw) followed by the D Mag holiday party, and Saturday, after making it to the tournament semi-finals, I’m heading to Neighborhood Goods to try to get Serena to sign the photo my wife took of her at the U.S. Open a couple of years ago. So last night, I just wanted to go home to my tiny back house where we’ve been living for the last six months while we reno our main house, wash my hair, reheat a couple of pork chops, and watch four hours of Rake on Netflix.

But after changing into my sweatpants and my long-sleeve City Champion t-shirt, putting a couple of baked potatoes in the oven, and slicing off a hunk of cheese from my dad’s Hickory Farms holiday gift box, I went to get a glass of water. And nothing came out of the faucet.

I checked upstairs. Then I checked the main house. Not a sputter anywhere. As I started to panic, I had a brief moment of clarity: 844 million people in this world don’t have the luxury of getting water from a faucet. But still, this was going to ruin my night.

Now, I had a surprising number of possible culprits for this fiasco. My backyard is entirely torn up with framing for a new concrete patio, and my front yard has two giant holes ringed by bright orange fencing courtesy of Atmos, which has thankfully been replacing my gas pipes as I am living in the red zone. Those holes seem to randomly and alternately fill and empty of water. I can only guess they are checking for air bubbles. Anyway, my first call was to my contractor, who said they had just checked the water after I mentioned low water pressure on Monday, and everything was fine. So I put on my head lamp, got out my massive water cover key, and started inspecting water valves. I found a lot of spiders and those weird rolly black beetles that seemed overly excited by the light, but I couldn’t ascertain any problems. So, a little creeped out, I called 311.

After having spent an hour over lunch yesterday on the phone with Randy at AT&T just trying to upgrade my system from two clunky old boxes to the new wireless Genie system, which seemed like it should be a straightforward request but ended with me hanging up mid-call and physically driving to the AT&T store at Sylvan Thirty so I could talk to an actual human being who told me he was sorry but he could only assist me if I was signing up for new service but not for an upgrade, I had low expectations for my ability to talk with a rational human at the 311 call center at 7:30 p.m. (If there is any reason I should actually go with U-verse instead of satellite plus Genie please comment below. This comparison was well beyond Randy.)

Instead, a woman with the soothing voice of an angel immediately answered my 311 call. She told me off the bat that the water company was closed and she wasn’t sure what she would be able to do, but she would try her best. She repeatedly left the line to check on options, letting me know each time that she was not abandoning me, but would return to my aid as soon as possible. She let me know that there were no reported problems in my area, that no shut-off had been ordered, and that she would have a crew come to my assistance within the next three hours.

Fortified by my cheese and having subbed a glass of whiskey for my planned ice water, I proceeded to call Atmos. The guy who answered was immediately confused when I accused him of shutting off my water. “Ma’am, this is the gas company…,” he replied, trailing off into silence. I tried to explain to him that if it wasn’t the contractor and it wasn’t the water company, it must be the gas company. And I knew they probably had a vendetta against me ever since I reported the fact that their crew had been trespassing across our lawn to use the private porta potty in our yard, which I would have been OK with except it meant that there was a constant morning parade past the large kitchen window in the tiny house where I was usually standing at the coffee maker in my bathrobe. But again, I digress.

To my shock, the water company showed up within half an hour. A lovely young man took one look at the meter and informed me that water was pouring out somewhere. We started walking toward the main house to see if I had left a faucet on when he spotted a giant pool of water by the concrete footing. “They must have hit the pipe,” he said. He apologized profusely for not being able to help, and I apologized profusely for being the idiot to make them come out at all. Then I called my contractor. Then I called the Belmont Hotel to book a room for the night. I didn’t call Atmos to apologize.

At the Belmont, Nick, the young man at the front desk, couldn’t have been kinder. He told me Smoke was closed but that the bar was open for another half hour. When he looked at my driver’s license and realized I lived a couple of blocks away, he perked up. “You’re eligible for a local discount!” he announced, and deducted $20 from my bill. My heart welled with gratitude.

The bathrooms at the Belmont are a little quirky, many with ancient, cracked tiles and tubs with the enamel worn through. It is all part of the Austin-esque charm. But the water pressure in the shower was a beautiful thing. I was able to wash my hair and shave my legs for the first time in a month (the legs, not the hair) in preparation for tonight’s shindig.

All of this is to say: thank you, lovely 311 angel. Thank you, Nick, for $20 and hot coffee as promised this morning. And a begrudging thank you to Atmos, for taking my ill-aimed abuse with grace and finally getting around to saving my life.

As for AT&T, you can stuff your sorries in a sack.

Why Dallas Is No Longer the Happiest City in America