I say “appears” because, as the plan’s authors readily admit, it is still very early in the planning process. If the history of the Trinity has taught us anything it is that politics, bureaucracy, philanthropy, engineering, general incompetence, and other forces that swirl around the Trinity often manage to get into the designers’ plans and muck them up. But at least at the unveiling, the designers were keen on making the appearance that the nature of the river was fundamental to their design.

Let’s highlight the significance of this. It means that after decades of debate over the Trinity, public resistance to the official Trinity narratives has helped reshape the city’s thinking around what we do within its levees.

There was a time not that long ago when everyone spoke about the river like it was an object that needed to be transformed—redeveloped as a road to boost a regional transportation agenda, harnessed to target economic development in areas of downtown, or dug-up and rebuilt as a park. Only in recent years—months, really—did some of the people closest to the project start to recognize that the Trinity was a floodway, and not a river like the kind that exists in east coast or European cities or in the mountains of Colorado. This park project, as pitched, has a core principle of restoring natural ecology in the floodplain.

The designers behind the new plan talked about making “strategic moves” to harness the river’s aquatic physics in a way that can help rehabilitate the ecosystem and open low-impact recreational access.

These ideas are coming from the Trinity Park Conservancy—the recently renamed Trinity Trust—the same organization that once hired the people that drew the jugglers under the overpass and commissioned the doomed whitewater rapid course. The shift in language and attitude should overjoy the old Trinity warriors—their friction and resistance has helped to sharpen Dallas’ understanding of the river and its future.

But this is the Trinity River, Dallas’ oldest punching bag, and old polemical habits die hard.

The two main responses to the new plan—one from the Dallas Morning News’ Mark Lamster and another from the Dallas Observer‘s Jim Schutze—both miss the mark in their reaction to last week’s unveil.

Lamster’s article indulges in uninhibited applause, reading like the proclamation of the arrival of the designer king, the star landscape architect Michael Van Valkenburgh, who will lay to rest the question of the river forever. The only moment that resembles something like critical distance is also Lamster’s oddest and most off-putting. He briefly breaks away from his report on the new plan to patently dismiss efforts to “re-wild” the Trinity River as a “non-starter.” More on that in a second.

Schutze falls in on the opposite side of the battle lines, trashing the new design as a project for “rich people.” Schutze’s main beef with this plan is that it appears, to him, as al -design and lots of fake things:

“Fake hills, fountains, little bridges all over the place and a signature Van Valkenburgh play area like ones he has created in other parks around the country, kind of like Six Flags on acid, with crazily exaggerated play structures designed for very hard-to-amuse children,” he writes.

I like the “Six Flags on acid” line, but Schutze must have been on acid during last Thursday’s event if what he describes here is what he saw sketched out in the new design. Dismissing that design, Schutze instead advocates for precisely what Lamster dismisses: that rewilding idea.

Here’s where we here at D have kind of stuck our foot in it. We dedicated an entire issue to the idea of re-wilding in March 2017, championing the ingenious simplicity of a concept advocated by architect Kevin Sloan. It proposes a restoration and enhancement of the Trinity’s natural ecology through a series of subtle, unobtrusive, and, well, “strategic moves.” 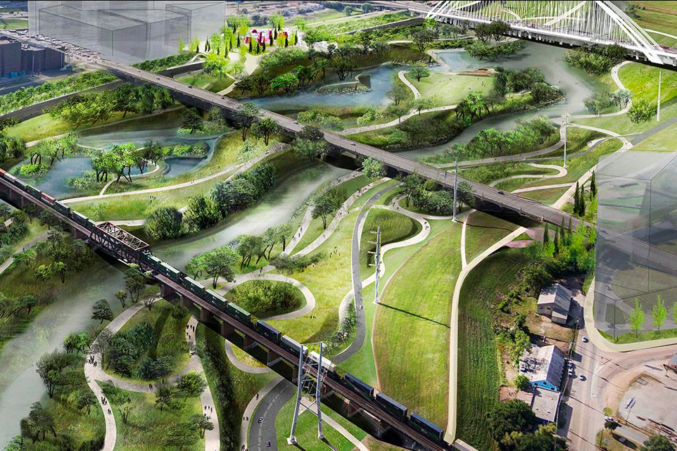 In fact, unlike Schutze and Lamster, when I looked the plans last week and spoke to their designers, what I saw and heard wasn’t evidence that the idea of re-wilding was patently ridiculous or that this new plan represented an egregious affront to any of its core principles. Rather, I saw in the new plan a demonstration of the same kind of thinking and attitude that is driving the re-wilding idea.

I first wrote about the potential complementary nature of the two ideas—the Harold Simmons Park and re-wilding—back in September after the Trinity Conservancy happened to hold a public input session for the park on the same day that a group of re-wilding proponents (which includes some of the Dallas residents who understand the river best, and yet have long been locked out of the “official” Trinity conversation) convened for the first time. I argued at the time that both meetings were after essentially the same thing, albeit via different approaches. One was charting a future for the Trinity beginning with community input; the other was beginning their approach with a close observation of the Trinity’s ecology.

Last week at the unveil, the Trinity Conservancy’s Brent Brown corrected me on this point. Yes, community input played an important role in the formulation of the new plan, Brown said. But the real fundamental driving force behind the design decisions was the question of water: how does water behave, operate, and shape the ecology of the floodway?

Water is also the consideration at the heart of the idea we presented in our Wild Dallas issue. In fact, both re-wilders and the Harold Simmons Park designers agree that however Dallas may choose to intervene with its river, it must begin with an understanding and appreciation of how water works in the floodway. This includes ensuring that the floodway serves its role as a stopgap against disastrous future floods. It also means not putting things in the floodway that could be destroyed by floods or would require intense maintenance to retain. And it means thinking through how dynamic and shifting water behavior can be used to help restore aspects of the riverine ecology that were destroyed when the Trinity was rerouted into a straight, inaccessible, intensively managed ditch.

Schutze is right that one key difference between the two groups comes down to money—the $150 million budgeted price tag for the Harold Simmons Park, which includes a $50 million donation by Simmons’ widow Annette. The re-wilders believe restoring aspects of the river’s ecology won’t take that kind of cash. For the Harold Simmons Park, the money hasn’t corrupted or bloated the vision, it simply means the designers have a budget.

That budget is reflected in some of the ideas depicted in the plan that Schutze characterized as Six Flags-esque. In reality, the suggested improvements are subtle and thoughtful. They include softening the grade of the river bank to allow access to the river’s edge; moving dirt to build mounds that would not be completely submerged during a major flood and placing a few immovable stone benches on them; constructing a handful of pedestrian bridges that would allow hikers and bikers to transverse the river at the level of the floodplain; and carving a secondary river channel that could create new opportunities for wetlands and the re-introduction of native plant ecologies that attract and sustain wildlife.

Birds, mounds, stone benches, modest pedestrian bridges, new slope gradations: this doesn’t exactly sound like the Texas Giant in the Trinity. In fact, they are all ideas completely in line with re-wilding, only on a larger scale. All the bells and whistles of the new plan—those supposedly ridiculous playgrounds Schutze believes are there to bedazzle your ADD-raddled children—are located on new parks planned for the levee tops, areas that will be untouched by floodwaters. These are places where the designers hope to bring Dallas’ urban core right up to the edge of the river plain. The desire here is to expand access, visibility, and development around the river, fulfilling that very old Trinity River Project ambition of reconnecting Dallas to its river and repositioning it as a civic centerpiece, and not a barrier. That ambition, in and of itself, was never foolish or misguided, only often misunderstand and pursued in foolish and misguided ways. 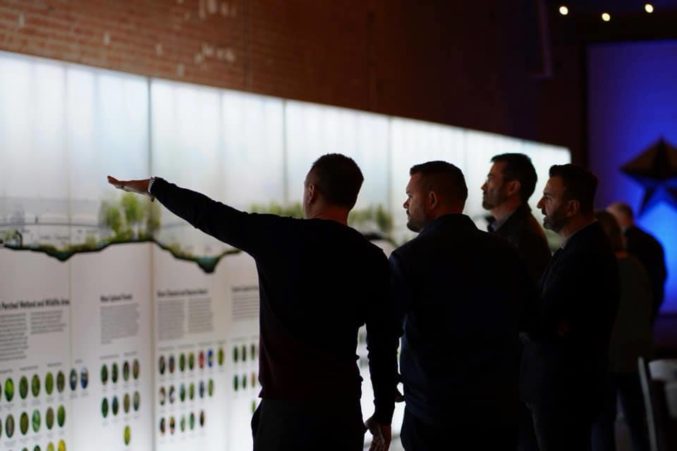 Hundreds attended a reveal for Harold Simmons Park at Gilley’s in the Cedars on December 6, 2018. (Photo Courtesy Trinity Park Conservancy)

Is all this compatible with the Wild Dallas vision? Generally, yes. There are always concerns. For example, does expanded access to the Trinity River really necessitate the construction of a new parking lot in the floodplain? Will the construction of elevated areas withstand frequent flooding events? Or will the realization of this style of park unleash the kinds of economic forces that can be disruptive to neighborhoods or create economic barriers to access? These are the aspects of the park the watchdogs need to question, address, and hold backers accountable to.

But the terms of the debate shouldn’t be drawn around a dismissal of ideas based on who is backing them, something both Schutze and Lamster seem to have done. The fact is everyone seems to finally agree that the Trinity River’s ecology needs to be at the center of the conversation about the Trinity River Project.

One group hopes to raise $150 million to reshape this ecology on a large scale and to build urban-style parks that can serve as a civic interface to a revitalized natural amenity. The other group, the re-wilders, have a vision that is quieter, more modest, more cost effective, and yet no less potentially transformative.

The scope of Harold Simmons plan is limited to 200 acres and its backers hope to break ground by late-2020. The re-wilding approach can play out over a longer timeline, gently stewarding a wider swath of the existing manmade topology towards the emergence of a 10,000-acre floodway that more closely resembles a native ecology.

If both ideas can move forward, re-wilding efforts may help the Harold Simmons Park feather the design of its edges into a larger expanse of a restored Trinity floodway that functions more like a preserve than park. Simmons Park would be the busy centerpiece of a larger restored floodway-based nature preserve, a natural amenity unlike anything in any other city in the world.

Dallas appears to finally be at a point where everyone is trying to row in the same direction down the Trinity. Which is why the critical response to the plan is disheartening. It takes advantage of a history of distrust and suspicion to revive opposition around plans that share a common goal. Not only is that unfair, but it threatens to damage and hinder both plans.

Does that mean it is time to go to sleep? Of course not. As I said at the top, myriad forces swirling around the Trinity have a history of mucking with the designs, however well-intentioned. Similarly, the re-wilders will have to show that they have the scientific chops, fundraising acumen, and political savvy to navigate complicated relationships with the city and the corps in order to make some viable progress on the ground.

But as of right now, there is finally some common ground. It should be championed, not scorched.