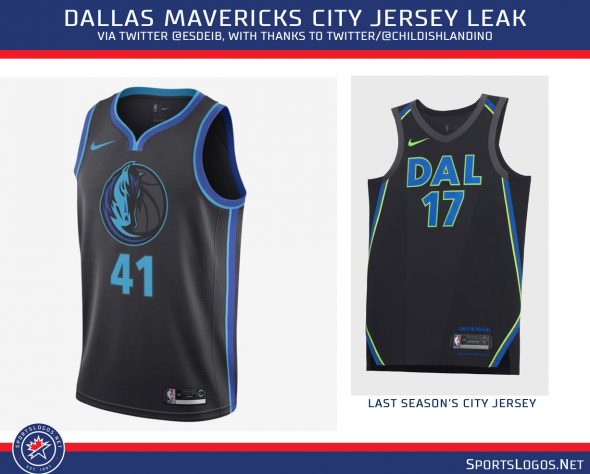 Matt Goodman told me the Mavs’ new City Edition jerseys had leaked so I went and found them and ugh. You see it. I’ve seen about half the other teams’ versions and quite a few of them are fantastic. Personal to the city they come from, great little details and tributes, aesthetically very pleasing. The jersey I have included here is very much none of those things. I hope it’s not real.

I thought last year’s iteration was sort of boring but it looks like it was designed by Virgil Abloh in comparison. If this is truly the Mavs’ jersey, I mean … what? This looks like the knockdown merch they sell at Academy. Honestly, at best that’s what they look like. This is the kind of whatever that comes out of a t-shirt cannon with an ad for a second-place wings establishment. This is like what you’d wear in a G League All-Star game. Dirk should just retire now so he doesn’t have to wear them. You put this jersey on and your lower body is automatically enveloped in JNCO jeans. You can’t buy this jersey in your size — it only comes in “too tight” or “ludicrously large.” This is like what a fake team wears in a video game. I’d rather the Mavs play in Spurs jerseys than this. If my son went to school in this, he’d get suspended for violating dress code. They have a terrible, out-of-date logo and the suggestion is, “Let’s make it bigger”?

These jerseys are awful.