The city of Dallas now has another study that shows just how severely the community is segregated along racial and economic lines. The report, which was led by the University of Texas at Arlington, examines fair housing across more than 20 municipalities throughout the region. Dallas, not surprisingly, is home to more low-income residents than its neighbors, and local, state, and federal policy decisions have further concentrated residents who live well below the poverty line in parts of town that lack services and jobs that would help them climb out of it.

“Poverty is generational, and that’s bad news because we can’t hit a switch tomorrow and solve it,” said Mayor Mike Rawlings during Tuesday’s council briefing. “On the other hand, it’s good news, because I think we can address poverty in 20 years, in one generation, if you start to do the right things by young children and focus on those children who are living in poverty.”

That was about as upbeat as it got. The council seemed grateful to have the report, but they were also realistic about how hard it will be to change some of its findings. The city can’t mandate that landlords take housing vouchers; the state legislature passed a law that hamstrings cities from doing just that. It can’t change the federal government’s decisions to concentrate housing projects in blighted areas. Other How-We-Got-Here problems are perhaps fixable, but require a lot of convincing. NIMBYism—not in my backyard—is prevalent in nearly every middle and upper-middle income neighborhood in this city.

“The reality is that people don’t care. If it’s not in their neighborhood, they don’t care,” said Councilman Mark Clayton, who represents the area surrounding White Rock Lake.

Out of sight, out of mind—especially so for Dallas’ neighbors, which haven’t invested in affordable housing or made transit easy for the poor.

“These people live in Dallas because that’s where the services are,” said Dr. Myriam Igoufe, the co-principal investigator of the study, in an interview yesterday before the briefing.

UTA’s analysis began as an ask from President Obama’s U.S. Department of Housing and Urban Development, which, in 2015, requested any municipalities that want federal money to assess the matter of fair housing. That’s not just housing affordability—it also deals with which neighborhoods are made up of a majority of nonwhite, high-poverty residents; it’s about transportation options in poorer parts of town; it’s about where landlords are accepting housing vouchers and where they are not; it’s about the availability and distribution of jobs. It’s all the things that HUD wanted its housing assistance to help fix.

The City Council gave the go-ahead in 2016, and UTA began analyzing data and meeting with residents. But last May, mid-way through the process, President Trump’s HUD eliminated the requirement. UTA decided to finish it anyway, and Dallas will use its findings to inform how it applies for fair housing-related HUD grants over the next five years. (The city is already set to receive $28.5 million this year from the department.)

“The city of Dallas is marked by a very stark geography of inequity,” Igoufe told the council. “We have found deepening and growing economic and racial segregation within the city. We’ve found that nonwhite households find fair housing challenges at a much greater rate.”

This should surprise no one who has been paying attention to such matters. But now Dallas knows more precisely what it needs to target. (“We’ve got to do shock and awe on District 4,” Rawlings said at one point, referring to the kickback-accepting felon Dwaine Caraway’s previous district in southern Dallas.)

Federally defined Racially/Ethnically Concentrated Areas of Poverty, abbreviated as R/ECAPs, have doubled here since 1990. There were 18 then; now there are 36. These are areas defined as neighborhoods that count at least 50 percent non-white residents and 40 percent who are living below the federal poverty line, which is an annual household income of about $25,100 for a family of four. The city has for years sent its federal funding to housing in the southern sector.

“It’s fairly alarming; this is not something we’ve seen elsewhere in the region,” Igoufe said. “And the poverty rates are way above the 40 percent threshold. We’re looking at 45, 60, even 70 percent.” 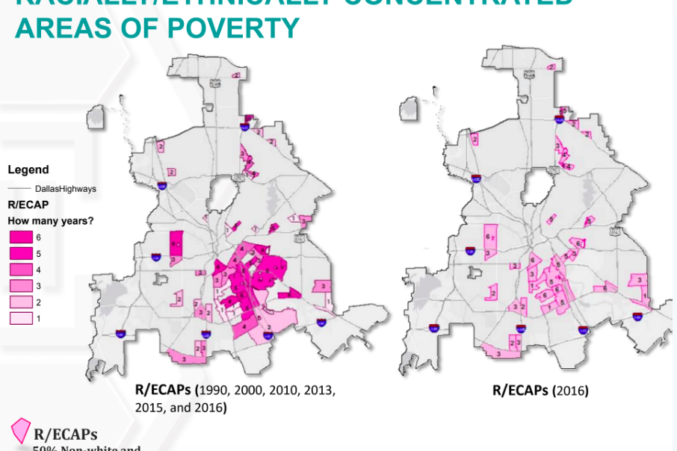 Racially/Ethnically Concentrated Areas of Poverty within the city of Dallas. (Courtesy: University of Texas at Arlington)

“Some areas have been plagued with racial and economic segregation for generations,” Igoufe told me yesterday.

The study found that housing choice voucher residences are disproportionately located within these R/ECAPs, which helps paint a picture of why they’re attracting poor minorities. There are eight of these north of Interstate 30, and the rest are below it. But they creep all the way from Interstate 20 up to 635.

The Inclusive Communities Project, a nonprofit that advocates for housing reform, surveyed landlords throughout Dallas and found a major concentration north of downtown that refuse to accept vouchers—even though the feds use ZIP code data to determine the value of the vouchers, which was meant to even the playing field. No matter—the state allows landlords to turn these folks down. And so there just aren’t many housing options for these families in areas that are near jobs. The study finds that if each of the landlords who said no were to house four voucher families, none would have to live within a R/ECAP.

“We don’t need you to take 20 folks,” Clayton said, referring to the landlords. “Everybody take four. It’s not gonna kill ya, you’ve got 300 units!”

These families face transportation issues as well. If you want a job that pays $3,333 a month, you’re going to need to head toward downtown. The edges, which is where most of the R/ECAPs are located, have fewer jobs and more complicated transportation routes. Not to mention that regional transit passes cost $160, which can be prohibitive to poor families.

“This is Dallas. Without a car you don’t get very far,” Igoufe said. “You can’t chase opportunities without mobility, and it becomes very difficult to be that person getting out of poverty when you don’t know how to feed your kids.”

The city has made housing affordability a priority. It’s announced a goal of shoring up its shortage of 20,000 affordable units. It passed a comprehensive housing policy and paid for a Market Value Analysis, which showed where the areas of opportunity are within the city. But this UTA study goes even deeper, showing the specific parts of town where there are deep roots of inequality that must be addressed. This could change the way the city advocates for transportation projects; Councilman Lee Kleinman, of North Dallas, noted that the city of Dallas has appointed board members to the DART board as well as the North Central Texas Council of Governments, which helps cities attract funding for transit projects.

Councilman Scott Griggs, who represents North Oak Cliff, floated the idea of the city of Dallas joining Austin’s lawsuit against the state to allow municipalities to mandate landlords accept voucher recipients. He also mentioned exploring inclusionary zoning opportunities to incentivize developers to accept these families in their new builds. Rawlings wants to mobilize code enforcement to spend time in low-rent complexes to make sure they’re meeting the city’s requirements.

“With the collective will to do something, we can make progress,” said Beverly Davis, the city’s director of the new Office of Equity and Human Rights. “If we continue on the track that we are in allowing the number of R/ECAPs and these levels of poverty to develop, it doesn’t just affect those people living in poverty. It affects the overall health of our whole community.”

The city’s job will be getting people to realize that.