When Mark Lamster arrived in Dallas in 2013, he was a curious bird in the world of newspaper publishing. Over the past few decades, newspapers have been shredding their staffs, and arts and culture writers were often the first to go. Today, there are fewer than a dozen full-time staff members at newspapers in the United States who write about architecture, and even fewer who are specifically dedicated to the topic. But thanks to a unique collaboration between the Dallas Morning News and the University of Texas at Arlington, Lamster was recruited away from his native New York to take a job that has long played an important role in the life of this city.

The tremendous value of an architecture critic in a major American city—and, particularly, in a young, emerging, and rapidly changing city like Dallas—was made evident by the work of Lamster’s predecessor, the late David Dillon. Dillon’s writing for the paper did more than consider the various buildings and urban projects that were developed during his long stint at the paper.

Dillon served as a kind of civic moral conscious, a check against distorted ambition and a champion of the city’s best inclinations. It is a role that Lamster has stepped into with aplomb, retaining something of an outsider’s distance on a city that both fascinates and frustrates him—rejecting the parochialism that masquerades as worldly sophistication, while championing the regional and indigenous qualities that often hide Dallas’ most sophisticated and authentic cultural articulations.

This work often brings Lamster into conflict with all sides of the debate over how the city should shape its future self. On the one hand, Lamster is a champion of modern and contemporary architecture, aspects that have come to be viewed by some as suspect. On the other hand, he rails against the ways in which generic or derivative modern architecture subverts humane design and human-scaled placemaking. This tension between the virtues and vices inherent in the legacy of 20th century design is at the heart of Lamster’s new book The Man in the Glass House, a biography of the architect Philip Johnson, which I write about in the November issue of D Magazine. My story is online today, and the book is out next week, on Nov. 6.

The Man in the Glass House is not a book about Dallas, but its subject has had a large influence on the shape of this city. Johnson is the man behind a wide variety of signature projects in Dallas, beginning with the Beck House on Strait Lane and continuing through such disparate buildings as Thanksgiving Square, the JFK Memorial, the Comerica skyscraper, the Cathedral of Hope, and The Crescent. In Fort Worth, Johnson is also responsible for the Amon Carter Museum of American Art and the Fort Worth Water Gardens.

Lamster’s book captures what made Johnson such an out-sized force in the world of 20th century American architecture. It is not just that Johnson designed many buildings in cities all over the world. Johnson was more than an architect—he was an ideological force, a proselytizer of modernism who generated the very idea of what it meant to be a builder in the late 20th century. Johnson helped birth the idea of the “starchtitect,” and without Johnson, it is difficult to imagine ambitious and architecturally minded projects like the Dallas Arts District. Johnson embodied a disposition toward modern architecture that remains very dear to Dallas: building can manifest a city’s civic ambition and public investment in the built environment can express a city’s own sense of greatness. 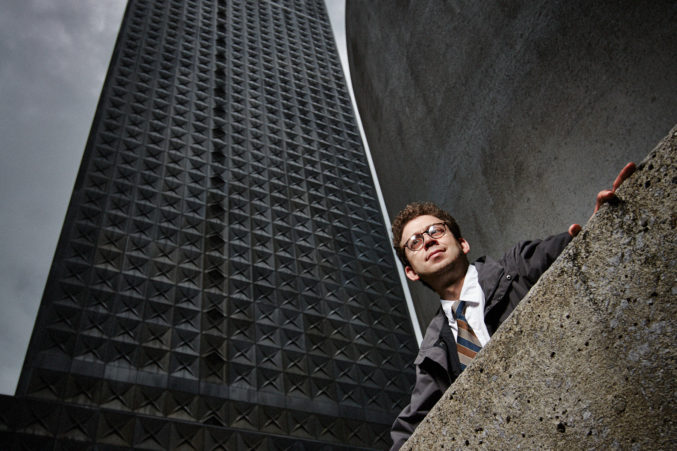 Perhaps what is most fascinating about Lamster’s book is the way he grounds these boarder cultural and philosophic ideas in the life of man whose story is rife with contradictions and conflict. When you get to the end of The Man in the Glass House, you are left with a feeling that some of these very notions of what it means to build a good city—to create a great building, to exert a sense of dominance through architecture—are inextricable from the way Johnson’s own life dabbled in radical—and often racist—political and cultural ideas (perhaps the most significant historical contribution in Lamster’s book is its exposition of the extent of Johnson’s sympathetic dealings with the Nazis, and New York Magazinetoday published an excerpt from the book that explores that very thing).

At the same time, these ideas are also byproduct of a more admirable aspiration toward achieving aesthetic authenticity and a sense of beauty. Johnson emerges as that quintessential American character—the self-made man—whose capacity for endless reinvention has much to say about the malleable identity and endless moral pivoting of America in the so-called American century.

The Man in the Glass House expands upon an important aspect of Lamster’s ongoing critical project in Dallas. Over the past half-decade, Lamster’s writing with the Dallas Morning News has shown that good criticism serves an essential role in bringing into the light the way our ambitions, dreams, and desires manifest themselves in civic discourse and action—in exposing our best and worst selves.

Which is why you should read more about his book here, from our November issue. And better yet, read Lamster’s book. In it is contained a surprising story of an incredible, if incorrigible, man who shaped the America we live in today—and by extension, shaped Dallas too.