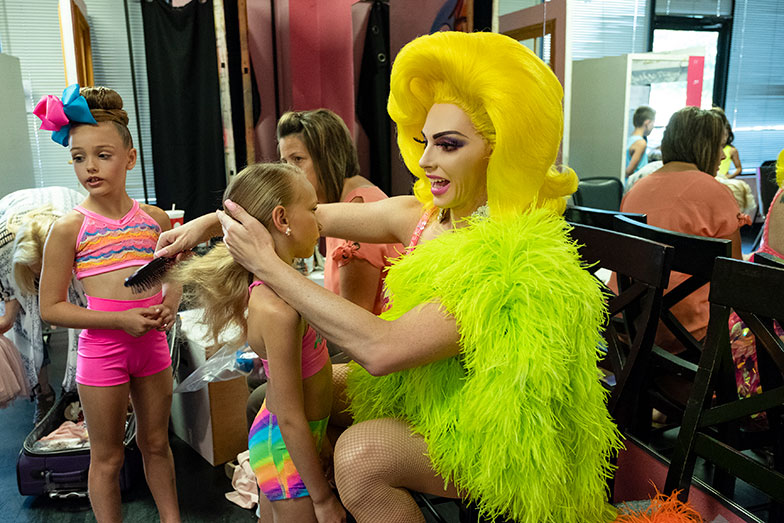 I’ve only had the chance to watch the first episode of Dancing Queen, Netflix’s new reality show starring RuPaul’s Drag Race fan favorite Alyssa Edwards, but I’m hooked. The show is filmed at Edwards’—or, more accurately, without the wig, Justin Dwayne Lee Johnson’s—Mesquite dance studio, Beyond Belief Dance. It is about obsessive dance moms. It is about self-identified bipolar II and “strange” teens who have found dance salvation. It is about dating in drag and dealing with the death of a parent. It is glitter and God, tears and tulle, and pronouncements from a gold throne. It couldn’t be more gay, and it couldn’t be more Texas.

Amid character introductions and competitive auditions, Edwards presides over the wedding of Dallas fashion designers Robbie Richard and Neil Marek at Cedar Canyon Dude Ranch, dubbed “the gayest wedding ever to happen in Texas” by Gay Star News (the happy nuptials actually took place last December). The theme? Space cowboy meets gurl, aka “the best club kid Western wear.” Edwards wears a silver-sequined, fringe-bottomed bodysuit with a Lacroix-style bedazzled cross stretching from Adam’s apple to diaphragm. The grooms wear Nudie-style, monogrammed Western suits (one pink, one blue) with matching cowboy boots. The guests all don fake eyelashes. During the reception, Edwards hops out of a cake. It is heartfelt, and it is fab.