A Gruesome Timeline of the Adolphus Hotel’s Potential Ghosts

While sifting through the Dallas Morning News archives to research a page on fancy hotel facelifts, I came across a macabre murder story set in the Adolphus, Dallas’ oldest grand hotel. It made me wonder about the place’s paranormal rumors. The Adolphus, opened in October of 1912, has embraced its haunted reputation in recent years. Get a cocktail at the lobby bar, and a bartender will hand you a menu in a homemade history book that includes several poems about the hotel’s supposed ghosts, the most popular revolving around a jilted bride.

But those stories—and the one about the Stoneleigh manager’s mistress taking a fatal fall in a secret passageway—seem to have evaded newspaper print. I found nothing in the News’ archives about a dead kept woman or would-be bride. Are those stories just Dallas folklore? Or did the reporters of yesteryear turn their heads when high-profile figures’ skeletons toppled out of their closets? I don’t have those answers, but what I do have is the tenacity to dig through decades of the News’ grainy newspaper clips to find the real reports on people who died on Adolphus property. (OK, it was really a pretty basic search on the library website and I’m sure I missed a few.)

If your soul is too sensitive to get past the first few minutes of any Six Feet Under episode, now is the time to click on something else. But if you like history, and don’t mind morbidity, read on. And since I’m probably minutes away from getting an angry call from a PR rep, I’ll go ahead and add that all my experiences at the Adolphus—spa treatments, afternoons at the pool, tea at the French Room bar—have been exceptional. Still, next time I step inside the Adolphus walls, I’m definitely taking the stairs.

[Note: Dates refer to when the story appeared in the paper, most names have been withheld, and nothing beyond the ‘70s is included.]

1912, October 20
Just two weeks after the Adolphus’ grand opening, an Italian waiter fresh from Chicago fell three floors down the elevator shaft from the main lobby. He had turned to talk to someone and backed into the elevator, not noticing that the lift had gone up without him. The waiter’s skull was crushed, and he died two hours later at the Baptist Sanitarium where Drs. Rosser and Doolittle unsuccessfully “performed the operation of raising the bone.”

1913, May 13
A 45-year-old insurance man and shriner from New Hampshire went for a walk with a group of men after dining at the Adolphus, during which time he became ill and “sank to the sidewalk.” His friends helped him back to the hotel, and 30 minutes later he was dead. The death was ruled an “acute attack of indigestion and apoplexy.” Note: “apoplexy” could mean “stroke,” but it’s also possible the medical examiner used this as a blanket term for “sudden death” since it was difficult to differentiate heart attacks from strokes, etc., back in the day.

1915, February 7
During a business meeting with a Dallas gentleman, a 26-year-old traveling collector for an Iowa cement company pardoned himself to his hotel bathroom then subsequently “threw himself across the bed and was soon in convulsions.” A one-third emptied, six-ounce bottle labeled “poison” was found in the bathroom. In the room there was a note believed to have been addressed to the young man’s stepfather that read, “I got the wrong bottle. Love to all.”

1917, December 26
After stopping to let a passenger off at the sixth floor of the Adolphus Annex (the then-brand-new 12-story addition built onto the hotel), the 16-year-old “elevator boy” attempted to hop on the already-ascending elevator but missed his step and fell 100 feet to the basement. The News’ report said the boy’s “skull was shattered and both legs were broken.” 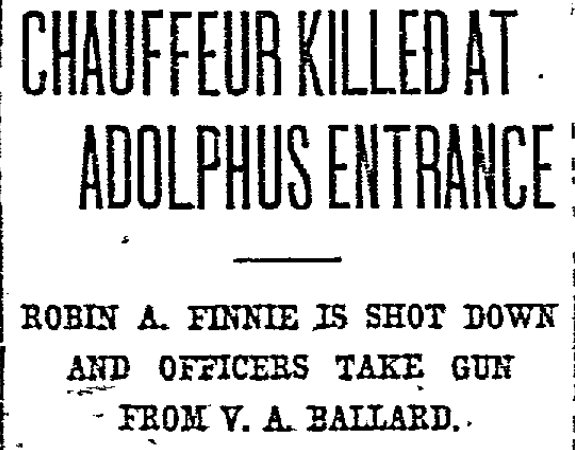 About 20 witnesses were on the scene and one of the victim’s coworkers explained that bad blood had brewed between the two men during a chauffeurs’ strike several days prior—and the gunman had a bruise and cut on his face to prove it.

1924, October 22
A 30-year-old Mexican cook stuck his head in the elevator shaft to look for the elevator’s whereabouts and was instantly killed by the descending car.

1930, February 21
When a model walked into a hotel room ready to assist a 60-year-old millinery salesman with his spring displays, she found nothing but a torn window screen. She notified staff and the man’s body was soon found in an air shaft. The young woman told authorities the man had recently been “despondent” and had told her “he wouldn’t see his family again.” Investigators ruled the case a suicidal jump. According to the News, “The force gained in the fall from the eighth floor caused his body to tear through the galvanized iron roof of an air shaft in one of the inside courts. He had plunged on through to the bottom of the shaft and his head and body were badly torn and cut by the blades of the powerful fan.” That explained the loud crash and puff of dust from fans reported by kitchen employees the night before.

1933, October 8
The 2-year-old son of a musician in the touring Henry Busse Orchestra climbed up on the windowsill to look out at a band playing on the street when the screen gave out. He fell 12 stories.

The hotel’s assistant manager scooped the body up and ran to the house physician who was unable to do anything but pronounce the boy dead. In the court case to follow, a judge ruled the Adolphus not liable for the $1,156.15 sought by the boy’s distraught parents, saying “the purpose of the screen was not to prevent people from falling but to keep insects out.”

1940, June 24
“With his clothes ablaze,” a 50-year-old man “plunged” from his fiery 11th-floor room and died on impact when his head struck the hotel’s marquee. As described by the News in a lengthy story: “While a crowd watched from the street, [the man] leaned out of the window, surrounded by smoke pleading ‘Please, somebody, save me.’” Some witnesses believed the man was overcome by smoke and fell, while officials believed he jumped to escape the flames. More controversy ensued over reports that firemen were held up by the hotel’s night clerk and delayed when given the wrong floor. Four days later, after an “extensive investigation,” jurors decided no state laws were violated during the incident.

1946, August 3
According to the fire marshal, a 51-year-old Dallas man woke and took his burned pillow and sheet into the bathroom after drifting to sleep while smoking. Yet after settling back in bed, he apparently succumbed to “smoke and gas when the fire flared up again.”

1955, May 27
A maid discovered a 36-year-old fashion buyer from Houston, visiting for a fashion show, dead in her room. It was determined to have been a natural death due to “acute alcoholism.”

1959, July 14
The “smashed body” of a 25-year-old prostitute was found in a small courtyard 14 floors below her room. The News described the woman’s body plunging down the “4×8 inset in the building, ricocheting from wall to wall” and also included such details as the book found on her bed (A Fool There Was). There were signs of a struggle, but the case remained a mystery for months.

A 31-year-old man with a “record for procuring” (that is, pimping) was questioned, as well as two others. But it wasn’t until months later, in January of 1959, when an 18-year-old woman was beaten and left in a Mercantile Continental Building closet, that authorities encountered Willie Philpot, whom the News noted as a “Negro 2-time loser.” In the weeks to follow, authorities said Philpot confessed to a series of crimes (each News article seemed to mention different ones) including the Mercantile beating, the rape and slaying of a 10-year-old girl in Longview, the beating of several men in Sherman and Alabama, and the murder of the Adolphus prostitute. According to authorities, Philpot said he was employed at the Adolphus and, after delivering “food and set-ups” to the woman’s room throughout the day, she gave him whiskey. From a February 1959 News article: “As they talked his hand ‘began to twitch’ and he flipped a towel around her neck, Philpot said. When she became still, he tossed her out the window and went back to work.” Philpot was eventually executed in Huntsville for the rape and murder of the 10-year-old black girl.

1971, March 15
A witness said he warned the hotel porter to make sure the elevator car was on the 2nd floor to load band equipment, but just after replying, “Yes, it’s here,” the porter stepped into the elevator shaft and met his death.

Before it became a posh office park, it was a halfway house.
By Tim Rogers
Local News