Over the last 10 days, while those of us in Dallas have largely dealt with rainy day after rainy day through a flat avoidance of the outdoors, Todd Phillips has been out in it, on a lake, by choice. The founder and head of Rockwall-based nonprofit The Last Well has vowed to stay afloat on a barge in the middle of Lake Ray Hubbard, living out of a tent, until his organization has raised $2 million to bring clean water to Liberia. 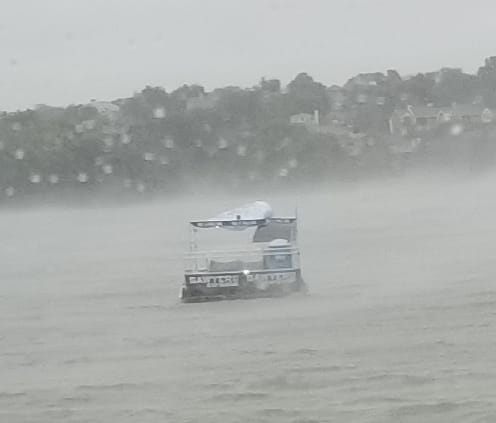 He’s living off protein bars and getting tossed around by storms. He says he couldn’t stand up for two and a half days, due to the way the storms angered the water, and that he got zero hours of sleep one night and then just two the next. Because I know you’re wondering: He has a Port-A-Potty.

The stunt marks, in many ways, the final push of a project that started more than a decade ago, when Phillips was a pastor in Washington D.C. Phillips says the young adults that went to his church set their minds on lending help to the most forgotten and devastated place they could find. They landed on Liberia, a West African country of 4.7 million people that was among the world’s poorest and had some of its most difficult living conditions, having been ravaged by a civil war that stretched into 2003.

The group determined that clean water was the greatest need, and Phillips launched the nonprofit The Last Well in 2008 with a mission to bring clean water to every person in the country within a dozen years. Phillips says one of the major challenges was that the country didn’t have a reliable census of the people within its borders. “Massive numbers of people that don’t exist on anybody’s radar,” he says. “We decided four years ago to literally go hut to hut, village by village.” He says that assessment will be complete in January.

The organization has raised about $27 million since it launched, money that has helped it drill hand-pump water wells in villages of over 300 people and provide smaller villages with advanced water filters—made by one of its major donors, Sawyer International—which, for a family of six, can last 15 years. The estimate is that a total of $32 million gets them to their ultimate goal, and Phillips says his organization is $4.6 million from it. So, he decided to get on a barge for a fundraising push for half. “The idea of the projects was to create awareness about getting across the finish line, but not to be here until my kids graduate high school,” he says. (Phillips has been chronicling his time on the barge on Facebook, and you can donate to the cause here.)

One thing he has going for him: He’s climbed three of the seven continents’ tallest mountain peaks—Africa’s Kilimanjaro, South America’s Aconcagua, and Europe’s Elbrus. He draws similarities to the task out on the lake. Whether you believe him or not, he claims that the pain inflicted by mighty Lake Ray Hubbard has been at times worse. “For four days, it was nightmarish,” he says. “It’s worse on the barge. Because it’s the same cold and wind and all the weather, but it’s like mountaineering with a mountain on full earthquake-mode.”

When we talked yesterday, the blue sky was finally peaking out from behind patches of clouds. Then again, Phillips could be in for a long journey.