The Dallas City Council didn’t bite on developer Yigal Lelah’s request on Wednesday to rezone a plot of land about two miles north of Pleasant Grove, largely because of his involvement in the failed Patriots Crossing development from a few years back. 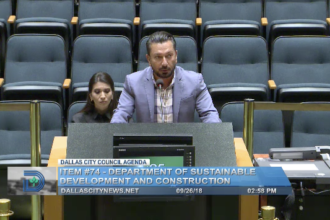 Yigal Lelah speaking before the City Council on September 26, 2018.

About eight years ago, the city gave Lelah $4.5 million to acquire land across from the VA hospital, on which he was supposed to build a mixed use development. That never came to pass, for myriad reasons I wrote about in a blog post earlier today, and his LLC wound up filing for bankruptcy. The city had to snag the land in foreclosure. It was a mess that rambled on for about six years.

Lelah went before the council on Wednesday to ask to rezone a 1.14 acre plot of land in just south of Scyene Road on St. Augustine. He wants 13 townhomes; it’s currently zoned single family. He said he’s not asking the city for money, and vowed not to in the future. Kevin Felder, District 7’s council member, immediately motioned to deny the request. Councilman Scott Griggs, the North Oak Cliff representative who was on the council at the time of the development snafu, noted that the plot of land is an area that the city’s housing policy does not recommend investing in because it would further concentrate poverty. He then chided the Patriots Crossing project for being a result of “exorbitant consulting fees, a scheme where the valuation of land was continually increased and passed on to the taxpayers to pay for it.”

Lelah defended himself after Griggs’ comments. He said the city of Dallas didn’t lose out on $4.5 million because it now has the land. He said he spent six years acquiring that land, “tearing down drug houses, relocating residents into new houses; I did everything the city asked me to do in regards to that project.” He called the denial a “personal vendetta.” And, indeed, the city is the one who issued the money for the land.

But Lelah was the developer who didn’t deliver the development he promised. Councilman Philip Kingston, of East Dallas and downtown, called for the city to make a list of “bad actors” who would be flagged when they request something from the City Council, however small. He also called for the city to look closer at a developer’s history to see whether they have delivered on their proposals in the past.

“We have, at the city of Dallas, an obligation to treat people in an equitable way, regardless of their background and how we feel about them,” Kingston said. “There is an exception when the city of Dallas has interactions with people that go wrong. There is nothing in state or federal law that require us from doing business with them ever again, ever.”

The City Council voted unanimously against the request.