Editor’s Note: This is a guest column by Daniel Herriges, content manager at the national nonprofit Strong Towns, who chimes in with some additional thoughts after the organization’s founder, Charles Marohn, wrote a column for us earlier this week. Strong Towns has turned its attention on North Texas in advance of its two-day symposium in Plano in early October.

The other day, we ran an op-ed in D Magazine about Dallas’s infrastructure shortfall. Around the same time, the Dallas Morning News published this story about suburban Collin County’s plans to expand its road network over the coming decades. A PAC called Collin County on the Move is supporting a $750 million bond measure to expand roads in Collin County, with $600 million of it going toward new, un-tolled freeways. Here’s what Michael Morris, transportation director for the North Central Texas Council of Governments, has to say about it: this bond money “will get us started.”

Morris calls it “the start,” because here’s how much Collin County officials say they need for roads over the next three to four decades: $12.6 billion.

You want the problem with North Texas in a few numbers? Let’s start with $12.6 billion, the amount Collin County says it needs to spend on new roads in the next 30 years. $12.6 billion is a really big number, and big numbers are hard to parse. At a certain point, to most people, big just looks big. So, let’s contextualize it:

We’re talking about an amount equivalent to more than the county’s entire budget right now, and a really sizable fraction even if we add cities—which provide more services than the county itself, and which are responsible for maintaining local streets—into the mix. But roads are important. They’re one of the most important things government does, right?

OK, so this is sizable. And it’s only for proposed new roads. What about maintaining what’s already been built? The life expectancy of an existing road is only about 30 years, after all. The replacement cost of a lane mile of road is a highly variable number depending on all sorts of local and site-specific factors. But $1.25 million is a reasonable lowball estimate. If we use that number, and data from TxDOT, we can do another round of estimates.

• 10,604: the number of lane miles of public streets and roads in Collin County in 2016.
• $13.3 billion: The estimated total replacement cost of the roads and streets already built in Collin County.
• 10.7%: The above number as a share of the value of all of the private wealth in Collin County.

We’ve put forth the notion before (also, here) that a financially sound community has a ratio of total private wealth to total public investment of somewhere between 20:1 and 40:1.

The ratio of total private wealth to existing roads alone in Collin County is closer to 9:1. And those roads are far from the only things the public sector is obligated to maintain, so the actual ratio is going to be a lot worse.

Collin County is already choking on pavement. And it wants to double the amount of pavement out there, in addition to paying for maintenance of the existing road network? How do the On The Move folks justify this doubling? With population growth projections:

Collin County is expected to exceed 1.5 million by 2030 and surpass the populations in Dallas and Tarrant counties with more than 3.5 million residents by 2050 — but with far fewer freeways. As more people move to cities within Collin County, the county’s population is expected to increase by 116 percent by 2040.

These numbers themselves, it must be said, are somewhat magical thinking—the graph on the coalition’s web site shows that they seem to have just extrapolated existing trends into the future. Endless, exponential growth.

2050 is a long way away, and there are many, many reasons to think the Dallas-Fort Worth metroplex won’t continue on the same growth trajectory for three decades. Just like California hasn’t sustained the pace of its postwar boom into the 1990s and 2000s and 2010s. Just like the Detroit metro before that, and Chicago before that, and St. Louis and Cincinnati (which were economic juggernauts in the 19th century) before that.

But hey, Texas optimism. I get it.

What I don’t get is the lack of a reality check about the cost that Texans are being asked to shoulder:

Collin County’s transportation infrastructure is at its limit and we need your help to meet the demands of a growing population. In November, Collin County voters have the opportunity to pass three propositions that will bring our transportation capacity to the next level and decrease the surge in traffic we will face if these Propositions fail – all while not increasing the county tax rate.

About that “not increasing the county tax rate” part. Collin County’s 2018 budget does indeed boast that 2018 marks the twenty-fifth straight year of no increase to the tax rate.

Collin County is able to do this because it’s in the Growth phase of what we call the “Growth Ponzi Scheme.”

Those 10,604 lane miles? The vast majority are still in their first life cycle. Collin County’s population 28 years ago—in 1990—was 264,036, which is only 28% of its population now. Most of those roads and streets haven’t had to be repaved. The same goes for bridges replaced. And for water and sewer infrastructure. When those bills start to come due, watch out.

Collin County On The Move can boast that their bond measure will relieve traffic congestion “all while not increasing the county tax rate” because it will do it by taking on long-term debt instead. That debt can be paid off if, and only if, Collin County’s population and economy keep growing the way they have during the past few decades—I believe the technical term is “like gangbusters.” In that case, just like a Ponzi scheme, this generation of investment in infrastructure can be paid for by the next generation of new development.

If (read: when) that growth slows or stops, watch out.

How Can Collin County Deal With Traffic Without Spending Billions on New Freeways?

Yes, Collin County has traffic problems. Collin County’s traffic problems are a function of its land-use pattern—which spreads development extremely thin on the landscape, and segregates uses, ensuring that people have to make lengthy motor vehicle trips to accomplish pretty much every one of their day-to-day needs.

Collin County’s traffic problems are also a function of its hierarchical road network, as illustrated by the aerial view from Google Maps image below. If your goal were to create predictable, inescapable daily rush-hour congestion, you couldn’t come up with a better way to do it. 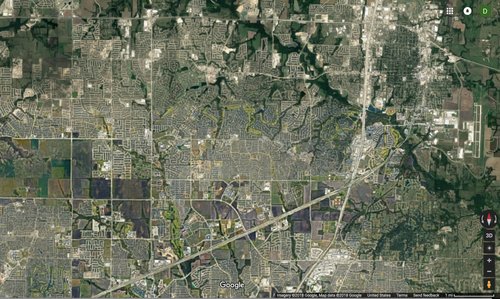 Nearly all traffic is funneled onto the grid of major arterial roads visible in this photo; note also the segregation of residential subdivisions from commercial areas.

We’ve recommended a different approach in our article Dealing With Congestion. In that piece, Charles Marohn suggests something that might seem a little radical:

For automobile flooding (congestion), the only way to deal with it and still have a successful economy is to address it at the source. We need to absorb those trips locally before they become a flood. Instead of building lanes, we need to be building corner stores. We need local economic ecosystems that create jobs, opportunity and destinations for people as an alternative to those they can only get to by driving.

Forget about doubling the size of the system. Spending $12.6 billion in 30 years, and none of it for maintenance of what you’ve already built? That way lies madness.

If you live in or care about Collin County or North Texas, and you’re ready to talk about a different way of moving forward, come join us in Plano next week.