This year is a seminal year of sorts. I’ve owned my Preston Hollow condo for five years. In its latest appraisal, the Dallas County Appraisal District determined that, in those years, my assessed value has increased by 51.59 percent. (Yes, there are a lot of 5s in all this.)

When news outlets say that income isn’t keeping pace with the cost of housing, property taxes are part of that. Has my salary been raised anywhere near 50 percent in the past five years? Alas: no. If it had, I’d happily deliver my taxes to DCAD with a kiss—and I might’ve even closed my eyes for a moment.

Since protesting my increases falls on deaf ears (part of the job description?), this year I’m going to listen. I want DCAD to explain themselves. I want them to show me precisely how they calculated this latest increase. Because anyone who has protested multiple years knows that the agency’s reasons change. One year a vague X, the next year it’s an equally vague Z. I’ve literally been told one year that the reasons given the prior year were not the reason for the increase. It makes me believe DCAD puts jars of fortune cookies on appraisers’ desks and, before each homeowner arrives, they crack one open to get the excuse they’ll use. Few say, “Good luck will smile upon you.”

One thing that doesn’t change? Expensive real estate is often somehow shielded from the increases that middle-class and upper-middle-class homeowners face. Back in 2016 I wrote an award-winning series on how DCAD is hamstrung by Texas’ real estate non-disclosure policy, which results in terrible valuations. That’s because in the Lone Star State, real estate transaction selling prices don’t have to be disclosed to the taxing body (so no one does unless their taxes are more than the selling price). Without disclosure, DCAD’s back-alley math is hidden from view.

Even if DCAD was privy to the sort of MLS data amassed by Realtors, the super stratosphere of real estate often lists their properties on the MLS, gets a handshake deal, de-lists, and signs the paperwork in private, away from even the MLS. Figuring values on commercial real estate is less accurate than a round of Pin the Tail on the Donkey. Dallas is easily losing tens of millions in dollars in property tax revenue from the top 10 percent of residential and all taxable commercial real estate.

Let’s Revisit the One Percent (DCAD: break out the Tums) 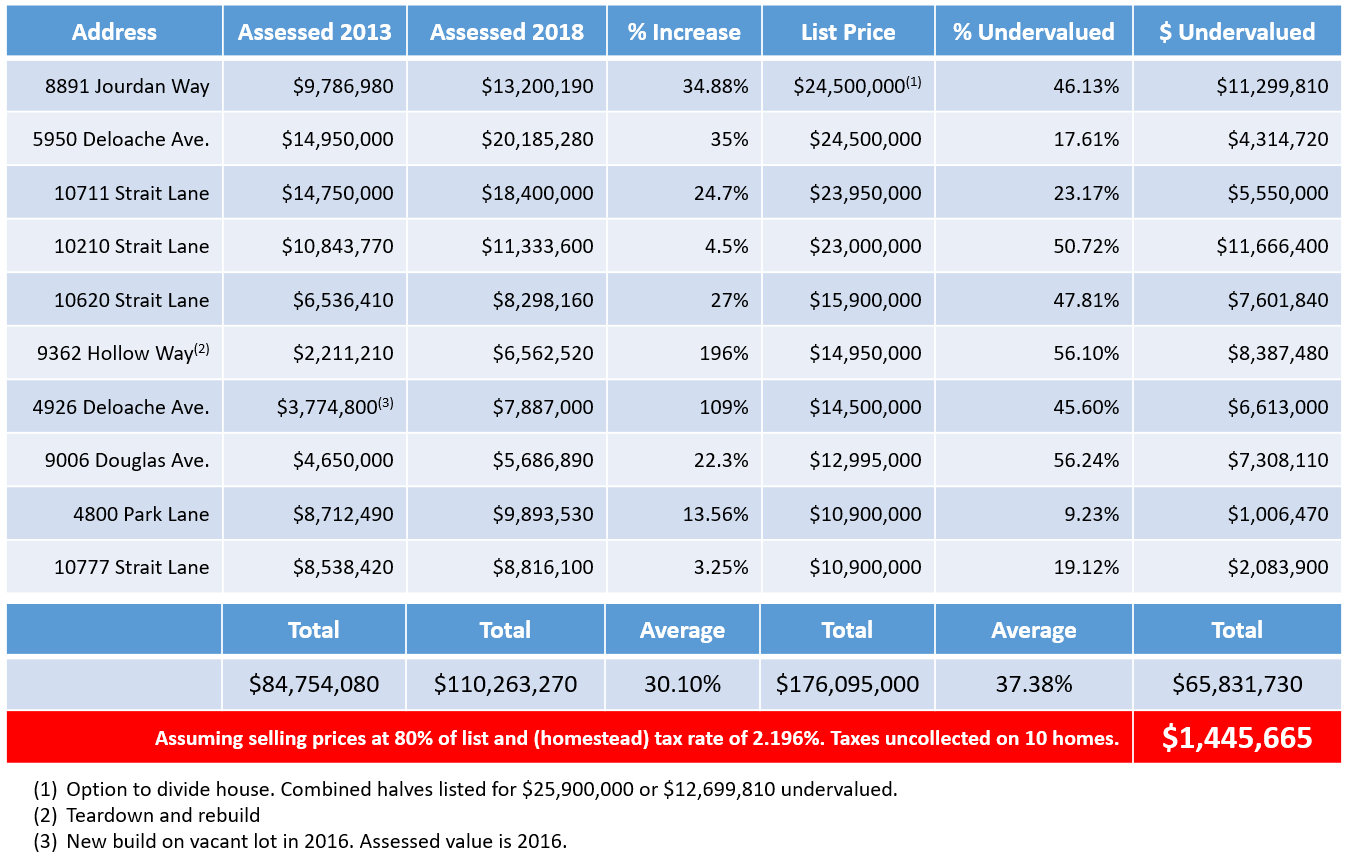 The chart above lists the 10 most expensive homes for sale in Preston Hollow. The only property that would quality for this group outside Preston Hollow that isn’t vacant land is the Museum Tower penthouse (and being a first sale, there’s no history). Zooming to the lower right, you see that, assuming a sale at 80 percent of asking and a homestead exemption, these 10 homes will cost Dallas at least $1,445,665 in property taxes this year.

You can also see that while my taxes rose 51.59 percent in the past five years, these high-flyers only averaged a mere 30.1 percent, and that includes two new-builds. Subtract those two and the average increase was 21.49 percent. I took home a 17 percent increase during my first year of ownership in 2014.

Looking at those new builds, DCAD, even when it is supposed to be seeing the building permit costs, is still off by half (even considering those new builds get listed for about double their assessed values). Either those building permits severely fudged the numbers or there’s a small Picasso being thrown into the deal that’s not in the Realtor’s listing patter.

All in all, these 10 homes have assessed values that undervalue them by nearly 40 percent, an average of $6.58 million each.

But I’ll be fair and give credit where it’s due. Back in 2016, the top 10 for-sale homes skirted $77,599 more in taxes than I estimate this year (assuming no successful challenges by hired tax fighters). That’s a 5 percent betterment. At this rate, DCAD will be taxing the super-wealthy fairly in 40 years.

How Have Our Elected Officials Fared? 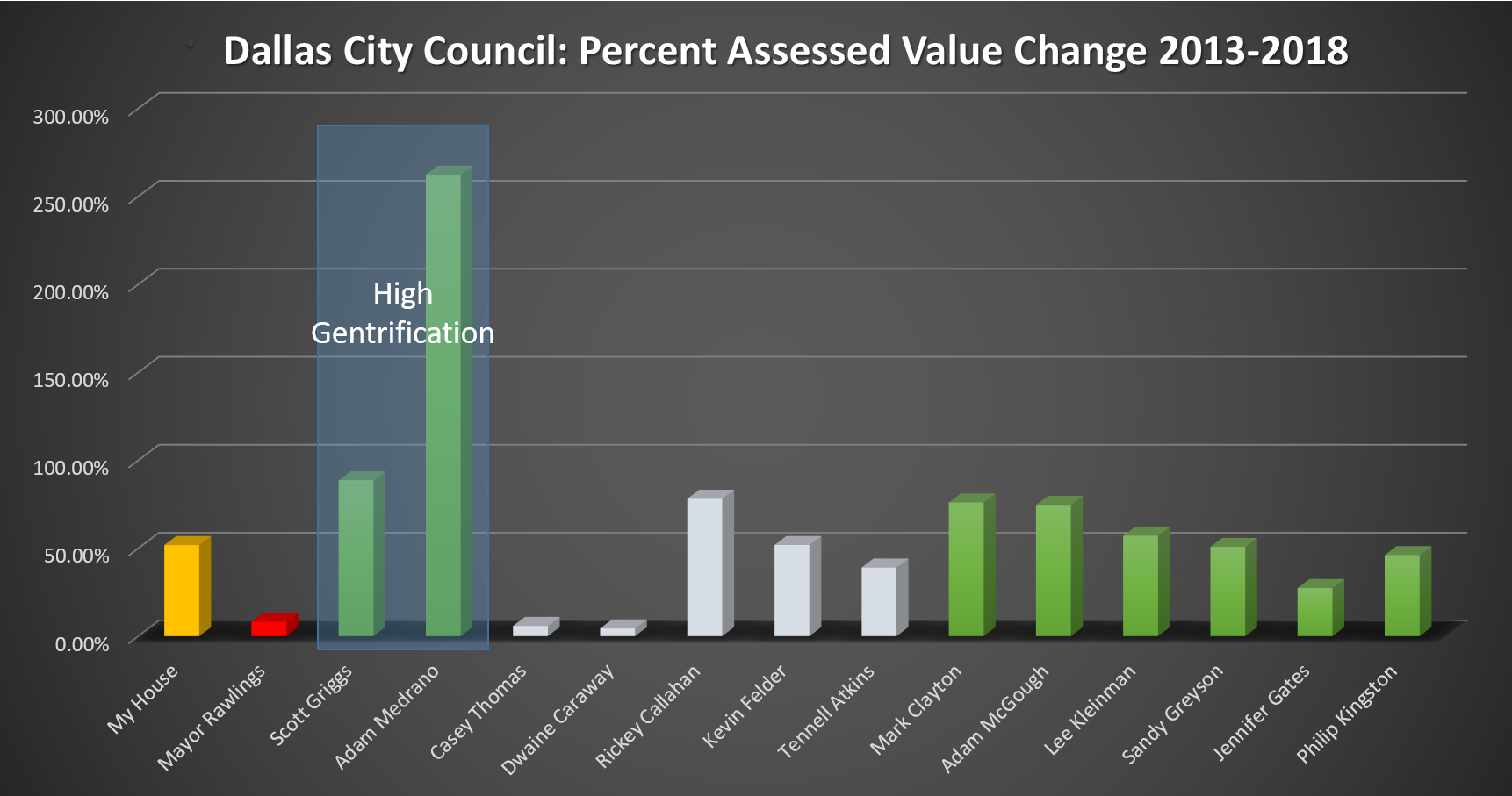 Above is a graph showing the assessed value change for members of the City Council from 2013 to 2018 (Omar Narvaez of District 6 appears to be renting). A caveat, worth noting before we go any further: The Dallas City Council has no oversight or control of the county’s appraisal district.

Now then. As you can see, while council members live all over the city, not many eclipse my 51.59 percent increase. Scott Griggs and Adam Medrano suffer the most as they live in heavily gentrifying areas, Griggs in North Oak Cliff and Adam Medrano in West Oak Lawn.

Pleasant Grove Councilman Rickey Callahan’s increase is new this year. Prior to 2018, his assessed value had only increased 11.6 percent since 2013. The same can be seen in Adam McGough’s residence, where his 74.75 percent increase is a large jump from 2017. He’d only risen by 25.6 percent since 2013. White Rock Lake-area Councilman Mark Clayton’s increases have been the same unending thunder I’ve experienced.

Note the three ritzy neighborhood representatives. While Lee Kleinman saw a healthy 57.24 percent increase, Mayor Mike Rawlings increase was a Where’s Waldo rate of 8.35 percent. Preston Hollow representative Jennifer Gates was also relatively untouched compared to this constituent. She logged a 27.5 percent increase in her assessed value in the years since 2013. 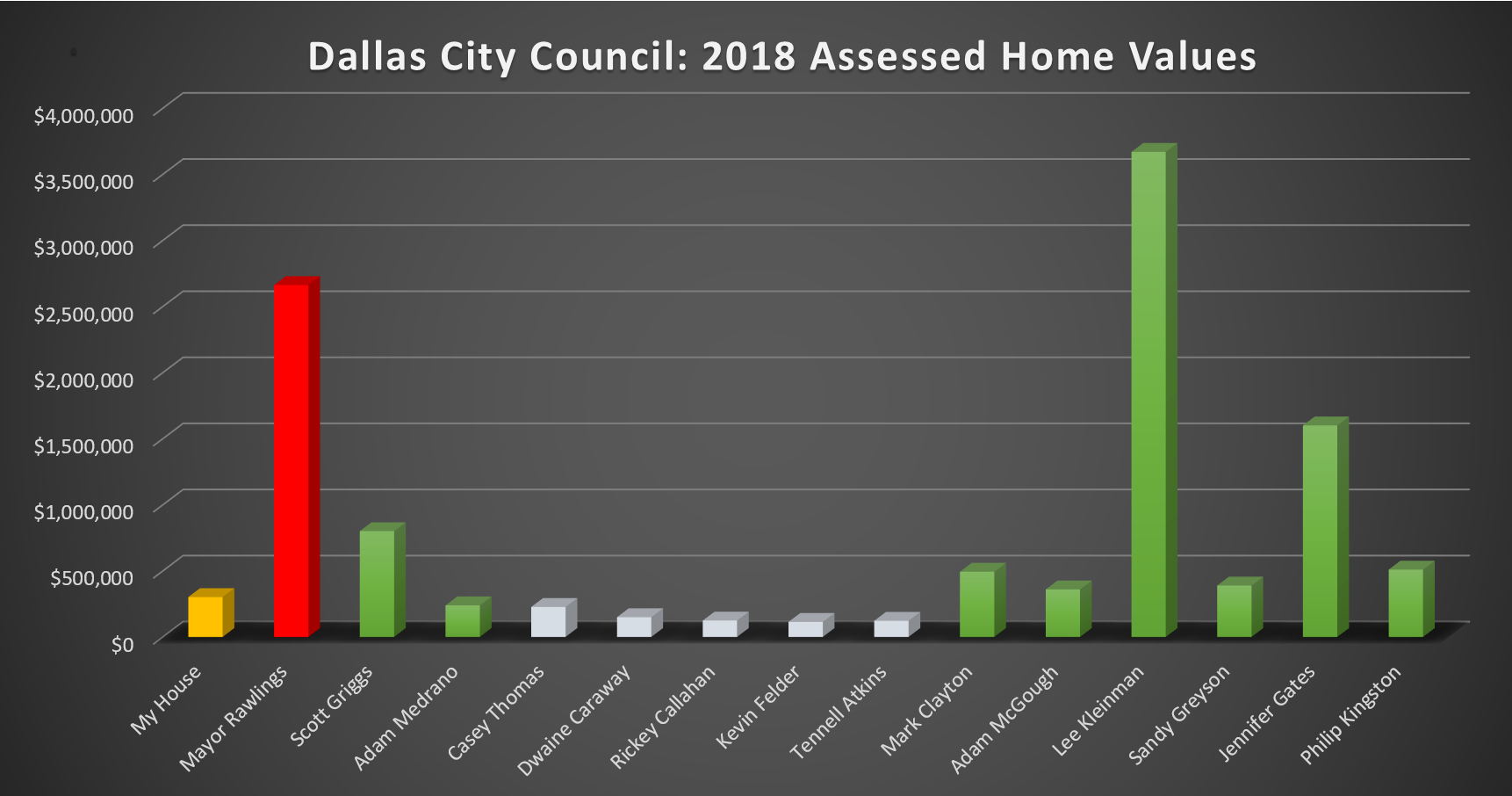 Now let’s overlay percentage increase with 2018 assessed values. Only three city councilmembers and the mayor own property valued at over half a million dollars. And while Griggs’ bill gets some leeway because of the hotness of the Oak Cliff area he lives in, the same gentrifying forces aren’t at work in Preston Hollow.

And yet, only Kleinman appears to be keeping up with the taxation bandwagon in North Dallas. (His home is currently being quietly marketed for a reported $3.9 million, a shade off DCAD’s $3.67 million assessed value.)

Why is that? Why is my condo, in a slightly tumbledown area of Preston Hollow, skyrocketing in assessed value compared with multi-million dollar homes in immaculate condition? Why are they escaping these staggering increases while DCAD lists their properties as “good” and “very good” and mine is just “average”? And why is a simple search of Ebby.com all that’s required to see just how unfair their assessed values are?

It’s time to pull out those slide rulers, boys and girls.

Finally, let’s mention the Preston Hollow home of former mayor Laura Miller. She was seen last week shaming folks burned out of their home for taking a 50 percent higher offer for their charred land than her friend Leland Burk had offered (a deal none of us would turn down).

It was reported in D Magazine back in 2003 that Miller and husband Steve Wolens had paid “a whopping $4 million-plus” for their current home. Shortly after buying the 1940s Tudor, it was completely gutted with its interiors restored. After a project that must have cost at least $1 million, it was featured in Traditional Home (lots of pictures) as Miller left office. After looking at the pictures, I’ll let others decide if the home warrants DCAD’s middle-of-the-road “good” rating.

Yet here we are 15 years later and her 2018 assessed value in DCAD is $4,267,270 million, likely spitting distance from what she paid in 2003. The past five years have seen a meager 14.8 percent increase. Those who have been in that luxurious home report that it’s a far cry from DCAD’s “good” rating.

Look. The vast majority don’t mind paying their fair share. I certainly don’t. But getting our collective noses rubbed into a bloody stump of unfairness? That’s hard to take graciously. It’s even harder when some elected officials seem to escape the same DCAD wrath that others find inescapable.

In my hometown of Chicago, the county tax assessor is in hot water after an independent investigation revealed a seeming systematic approach to unfairly shift property tax burdens onto poorer citizens in residential and commercial real estate.

Yes, I will be protesting my taxes this year. I want answers and so should you.