The Dallas mayor on the latest mass shooting in Florida: "Leaders have got to step up and lead, or they need to get the hell out of the way to let the people lead.'
By Alex Macon | February 15, 2018|1:44 pm
Advertisement 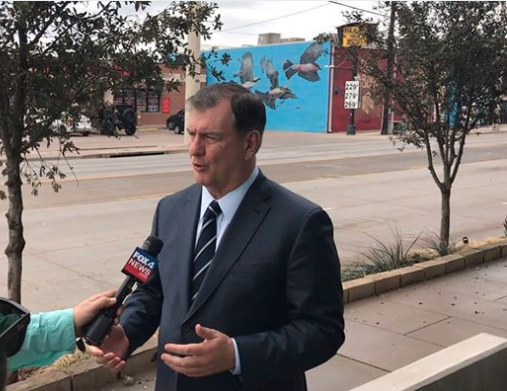 A day after a mass shooting at a Florida high school became the latest in a distressingly long line of American gun massacres, Mayor Mike Rawlings called for Congressional leaders to form a commission to investigate what’s behind the country’s gun violence epidemic.

Rawlings, speaking to Channel 4, said the latest incident had hit particularly close to home: a close friend of his has a son who attended the school in Parkland, Fla. He said he would write a letter to Texas’ two Republican senators, and to Dallas’ representatives in the U.S. House, urging them to assemble the nation’s “best and brightest” to come up with solutions. Rawlings avoided making any prescriptions of his own.

Rawlings condemned the rhetoric that’s become familiar to many in the wake of mass shootings, and said both Democratic and Republican elected officials have failed to take action. In November, Republican lawmakers in the U.S. House of Representatives blocked a Democratic bill that would have established a select committee on gun violence similar to what Rawlings is proposing.

“I’m so frustrated with the leadership of this country,” he said. “It’s like every time this happens they’re deer in the headlights, and all they can say is ‘our thoughts and prayers are with people, and this is pure evil.’ I really believe that God wants us to act, and not just talk.”

Rawlings did support one other course of action.

“America needs to be outraged by this. Kids are dying…Don’t elect people that won’t do anything about it.”