Earlier this week, a couple tweets arrived from Congressman Pete Sessions’ Twitter account proclaiming that the Oklahoma-based company Ditch Witch is “leading the way in new technology with microtrenching fiber.” Another: “Heading to ICUEE? Ditch Witch is unveiling new and enhanced underground construction equipment! Come check it out!” 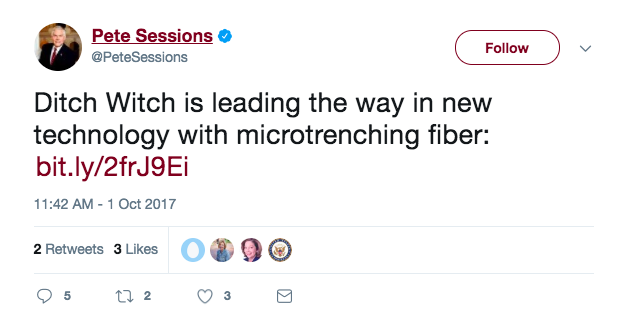 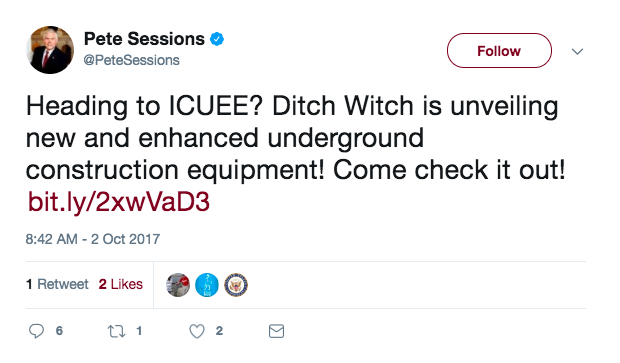 A few eagle-eyed FrontBurnervians brought our attention to the tweets, and about a dozen other commenters berated the congressman for promoting a company through his Twitter feed. So I called Caroline Boothe, Sessions’ communication director, and asked what it was all about. She says it was a simple twitter organizational gaffe that happened twice and went unnoticed. She did sound aghast that they’d gone out through the congressman’s account and emphasized that Sessions has no financial ties to Ditch Witch or its parent company, Charles Machine Works. I looked through campaign finance reports and found no tie there, either.

Simple mistake. Her father is the president of Ditch Witch New Mexico, and she helped run the chapter’s Twitter feed in college. The company recently handed the social keys to a third-party called Commercial Web Services, and it appears Sessions’ account was somehow linked to Ditch Witch’s. The same language was used on the company’s other accounts. She says she’s not being paid by Ditch Witch, either, which is important considering this ethics rule.

“They must have somehow gotten into Pete’s [account],” she says. “He has no connection, it’s truly just me. … We’ve gotten so many mentions and comments this week in light of the debates going on, that we must’ve missed the reaction.”