Yesterday was September 11. A terrible day in our nation’s history. It’s a day of remembrance. A day of quiet reflection.

And thanks to the Real Housewives of Dallas, it’s now also the day we see LeeAnne call someone The C-word whilst wearing a ridiculous hat. It’s what we needed. It’s my sunshine on a cloudy day. When it’s cold outside, LeeAnne saying the C-word is the month of May. An escape from that which truly matters is what this franchise is supposed to deliver, and it absolutely came through for us all this week.

Stephanie, Cary, and Brandi head to Memphis, where they go “catfishin.’” This is Memphis, so we’re talking normal catfishing, not internet catfishing where someone pretends to be a dude, and you fall in love with that dude, but then the dude turns out to actually be your mom.

Stephanie squeals about being in the water. She further freaks out about the murder of innocent worms and about using them as bait to catch fish because it “doesn’t seem like something Jesus would like.” And I guess she’s probably right. Pretty sure Jesus wouldn’t understand the need to use worms to catch fish.

I mean, if I could turn five loaves and two fishes into enough food to feed a multitude, I’d be like, “Guys, guys, easy there with the worms on hooks. There’s totally no reason to use a worm to catch fish. I can do my Jesus magic and we can eat. Just hold your dang horses. Delivery will show up in like 20 minutes if I preheat my brain here for a second. Oh my dad, you guys. Murdering worms for no reason. I literally make us magic dinner every night. Let’s not reinvent the wheel — which was my idea by the way.” (Jesus slams door, turns the glass of water in his hand into wine, chugs wine)

After leaving her child in the car with the nanny to take a nap while she goes catfishing, Brandi talks more about how she really wants another child. Stephanie decides that if Brandi is having another kid, she also wants to have another kid. Stephanie says to Brandi, “I want to get pregnant at the exact same time.” Cary has the appropriate reaction to this statement. 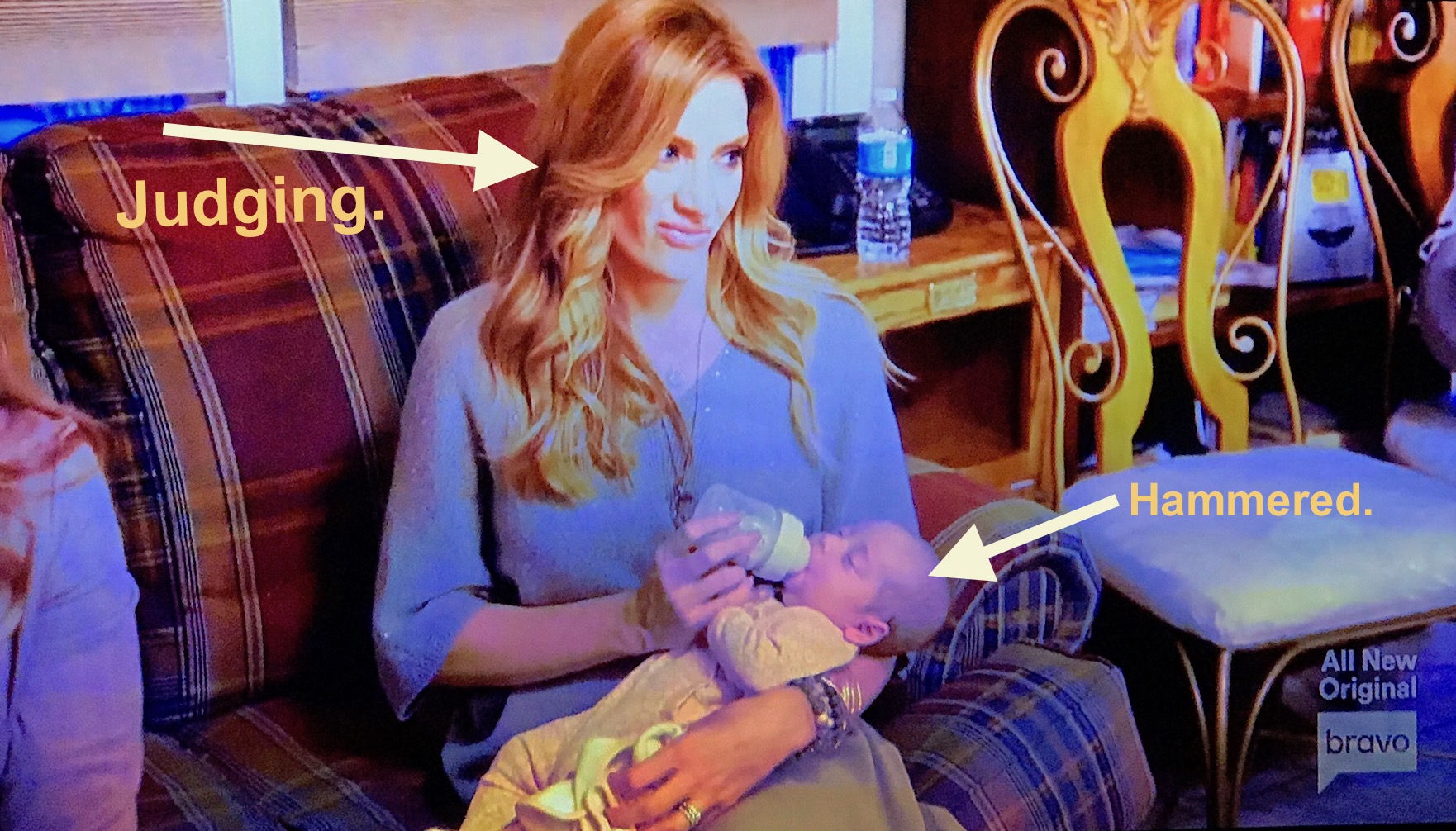 Meanwhile, Kameron is presenting her pink dog food concept to her husband, Court, in order for him to approve the idea so that it can move into production. She asks her daughter if she thinks the idea of pink dog food is a good idea, and her daughter brings up the only important question regarding this concept: “Why do you want pink poop?”

Court squints at the elementary-school-science-project-mood-board presentation Kameron brings to his office. Kameron flirts with him by bragging about how she hasn’t worn this pink suit since one year after college. When she says “college,” her lips fight each other to try to say the “g.” It ends up sounding more like “collesh.” Court squints.

She says it’ll cost $100,000 to make the dog food. Court says that she needs to reorganize her ideas and bring him an actual pitch if she wants him to take her seriously. She says that this is a pitch. He says, “No, that’s a cardboard poster.” Sick burn, Court. 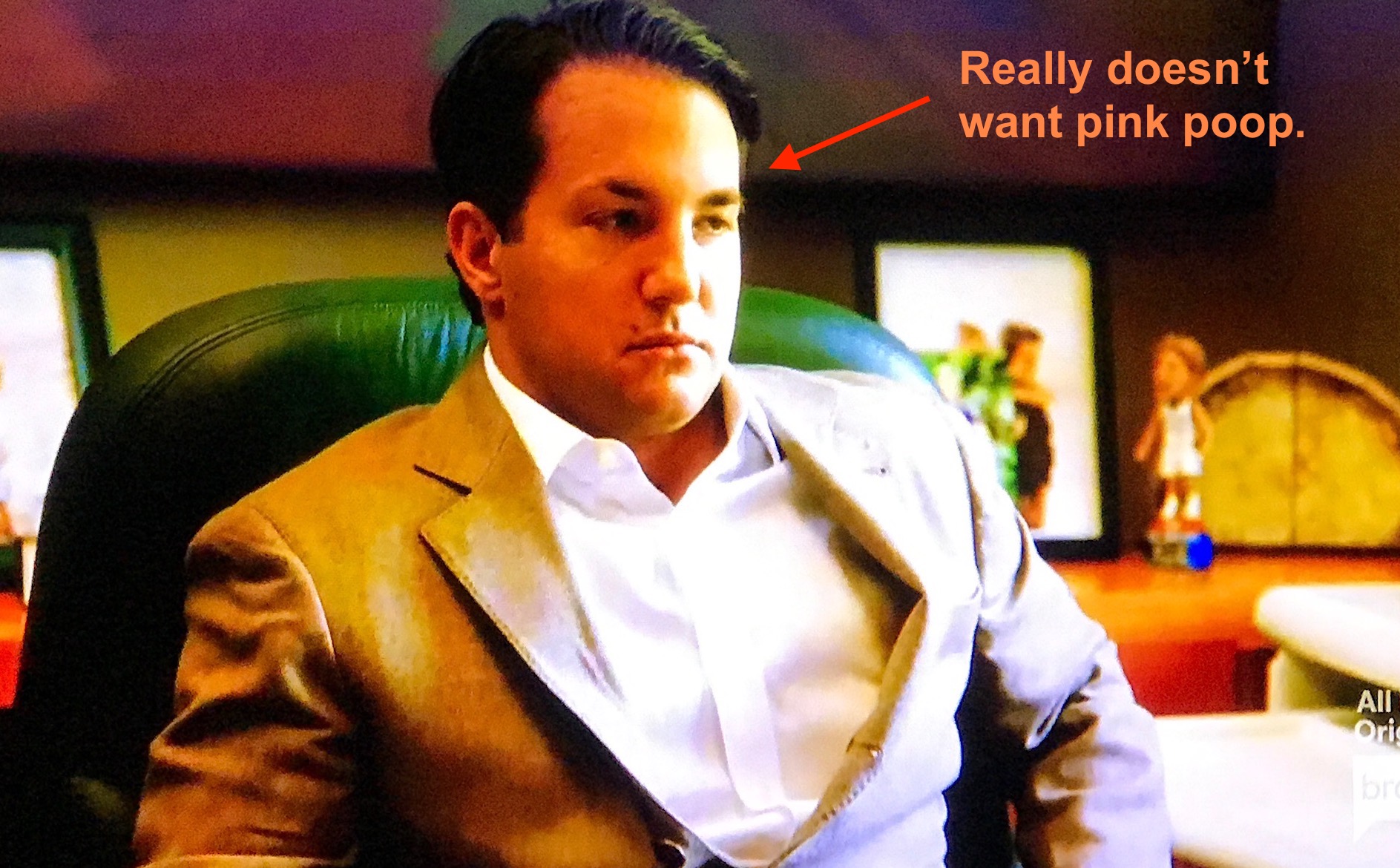 And I love that Court lives in a universe that is so far removed from poster boards that he calls them “cardboard posters.” He then says, “If you really want to take it from Blonde Business to Real Business, I need some details.”

Spoiler alert, Kameron gets what she wants. Sort of. The dog food kind of exists—it’s brown dog food with a few pink pieces sprinkled throughout. (Likely to avoid the pink poop scenario laid out by her brilliant daughter.) And it’s $28 per bag on Amazon.

LeeAnne, Kameron, and D’Andra go to dinner to complain about not being invited to the trip to Memphis. Kameron wants to know the difference between “wild boar” and “regular boar” because she doesn’t “have a sophisticated palate.”

The episode begins to tank, and I begin to realize that this is what we call—in the reality TV show industry—a set-up episode. In a set-up episode, we’re not going to get real drama. We’re going to get a bunch of tiny moments that lead to an explosion. And that explosion won’t happen until next week. Reunion Tower and I begin to become frustrated by the slowness of the episode. 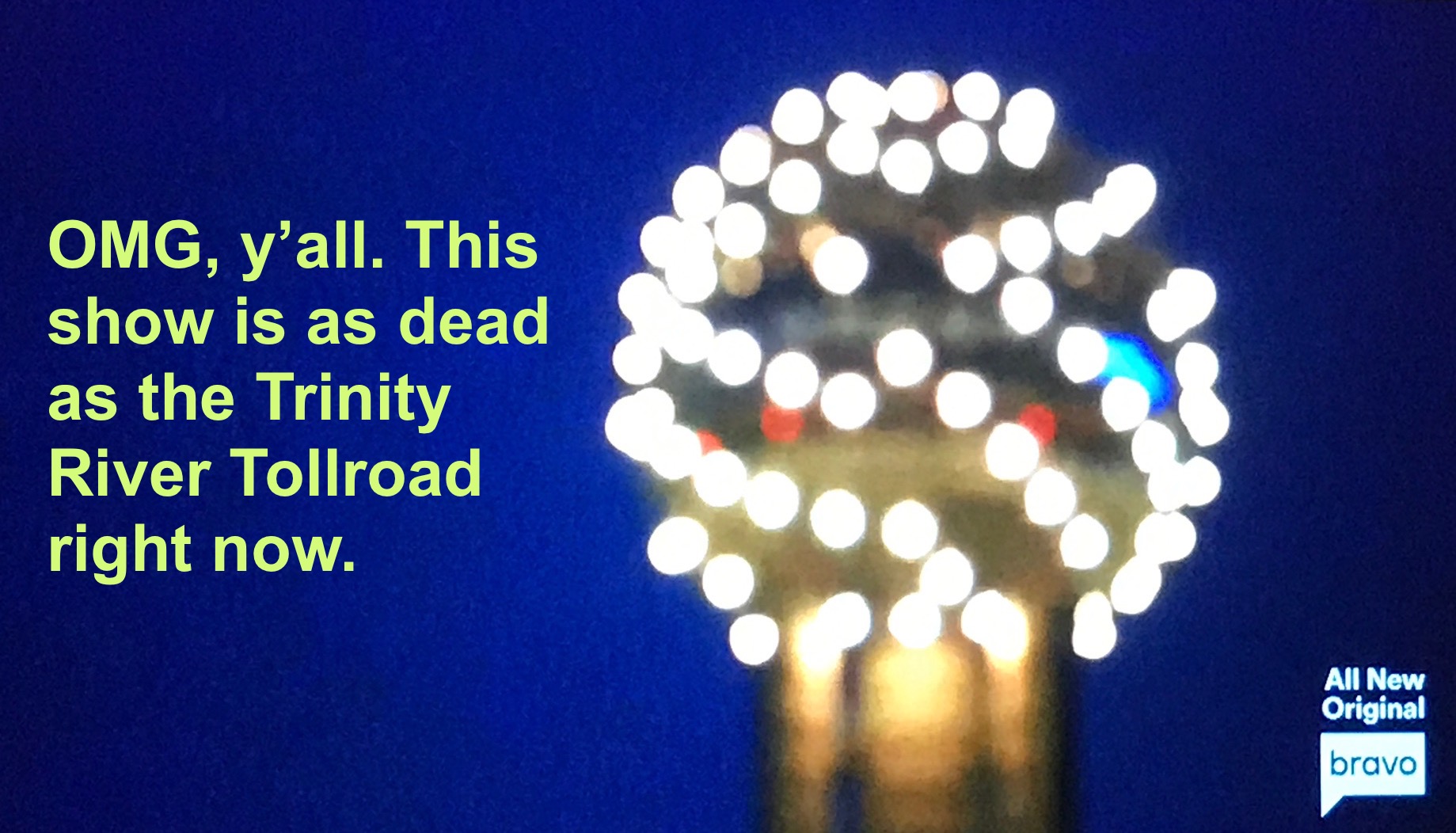 LeeAnne confesses that she has a woman crush on Kameron. But clarifies that it isn’t sexual. Great. 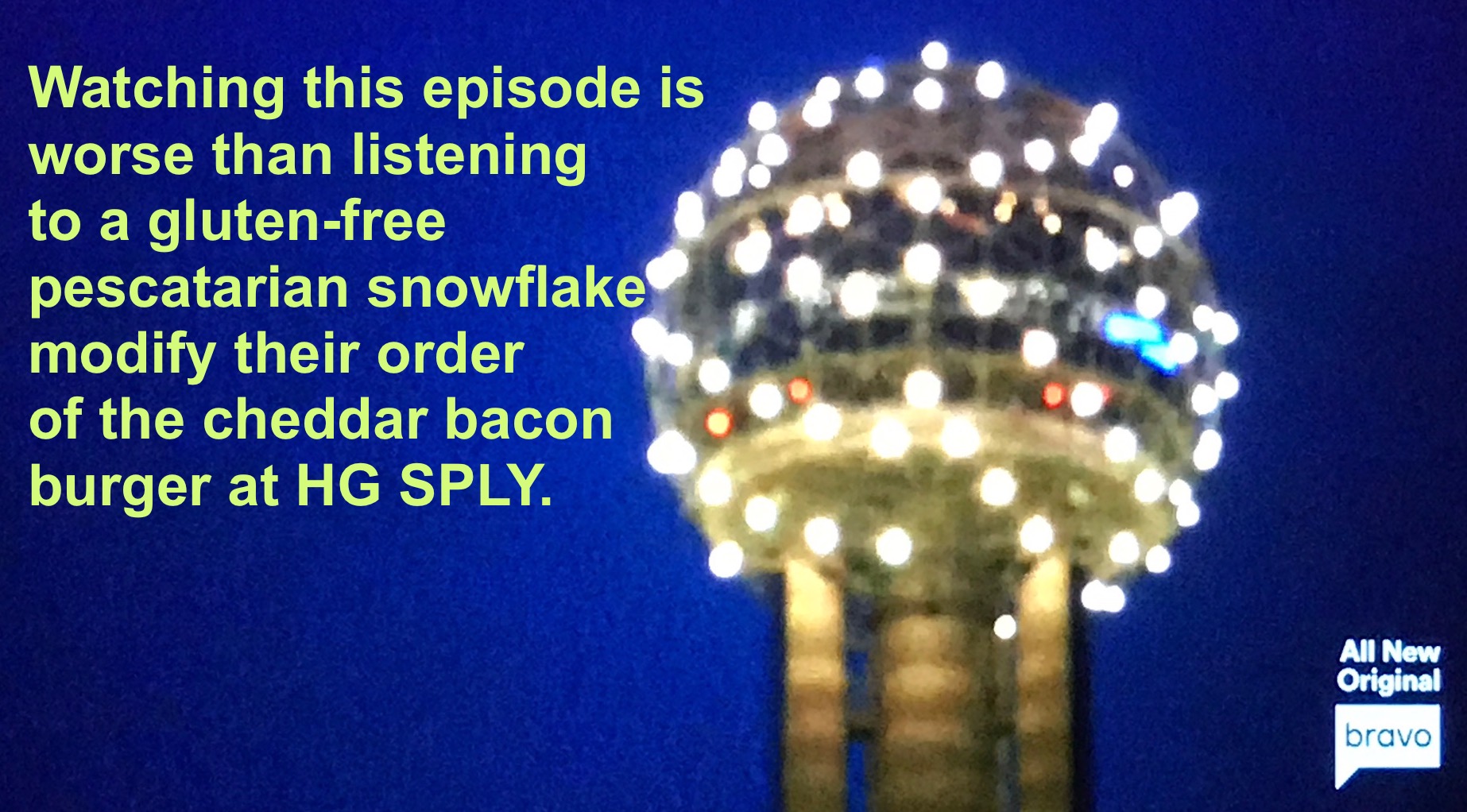 I swear, the advertisement for Alive! vitamins commercial break has a more interesting storyline right now. 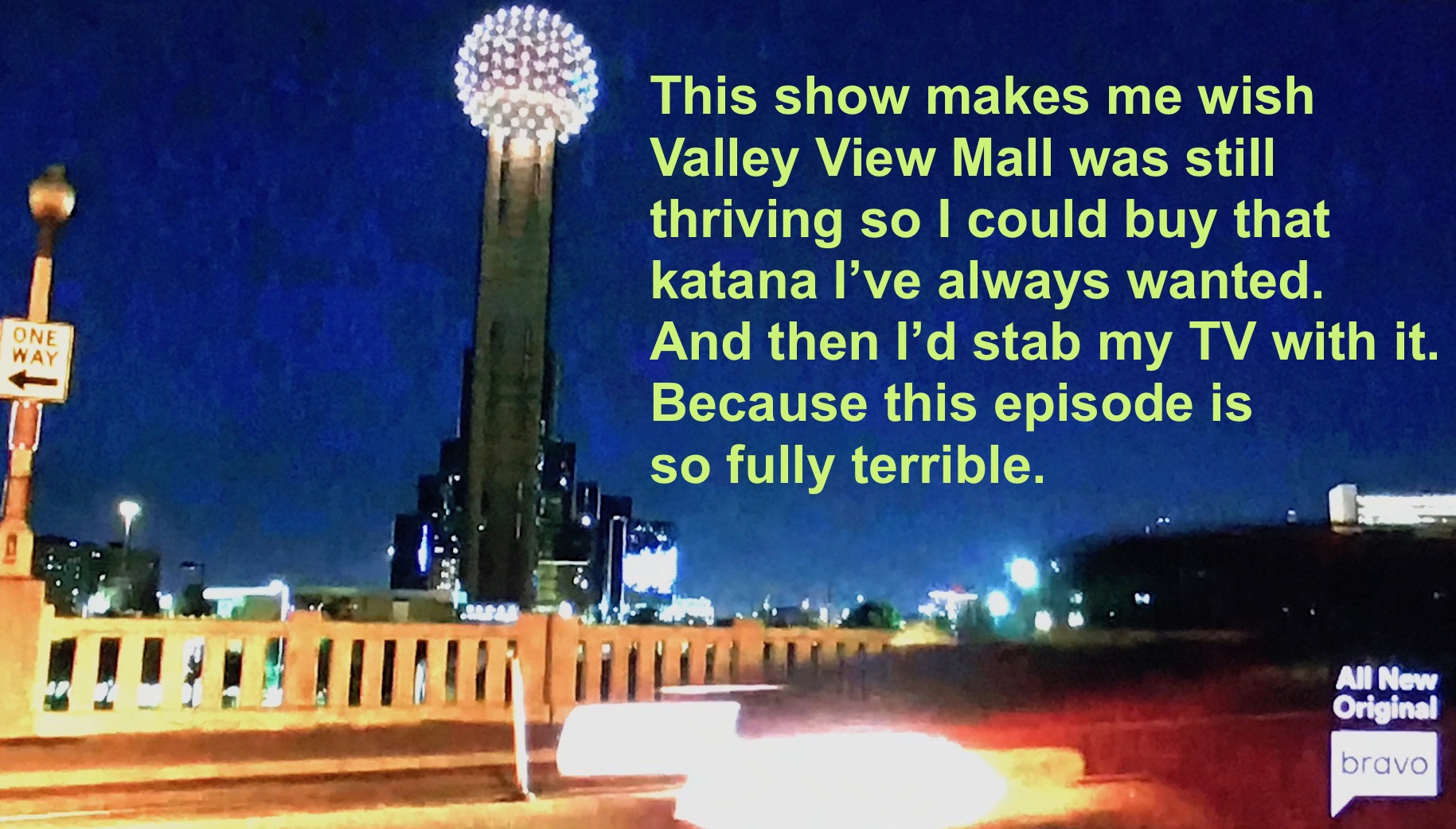 D’Andra dresses up like a fortune teller and then tells her husband the future. “I guarantee you a year from now, we will be having this same conversation. Ten years from now.” Her son in law moves out after she yells a little. 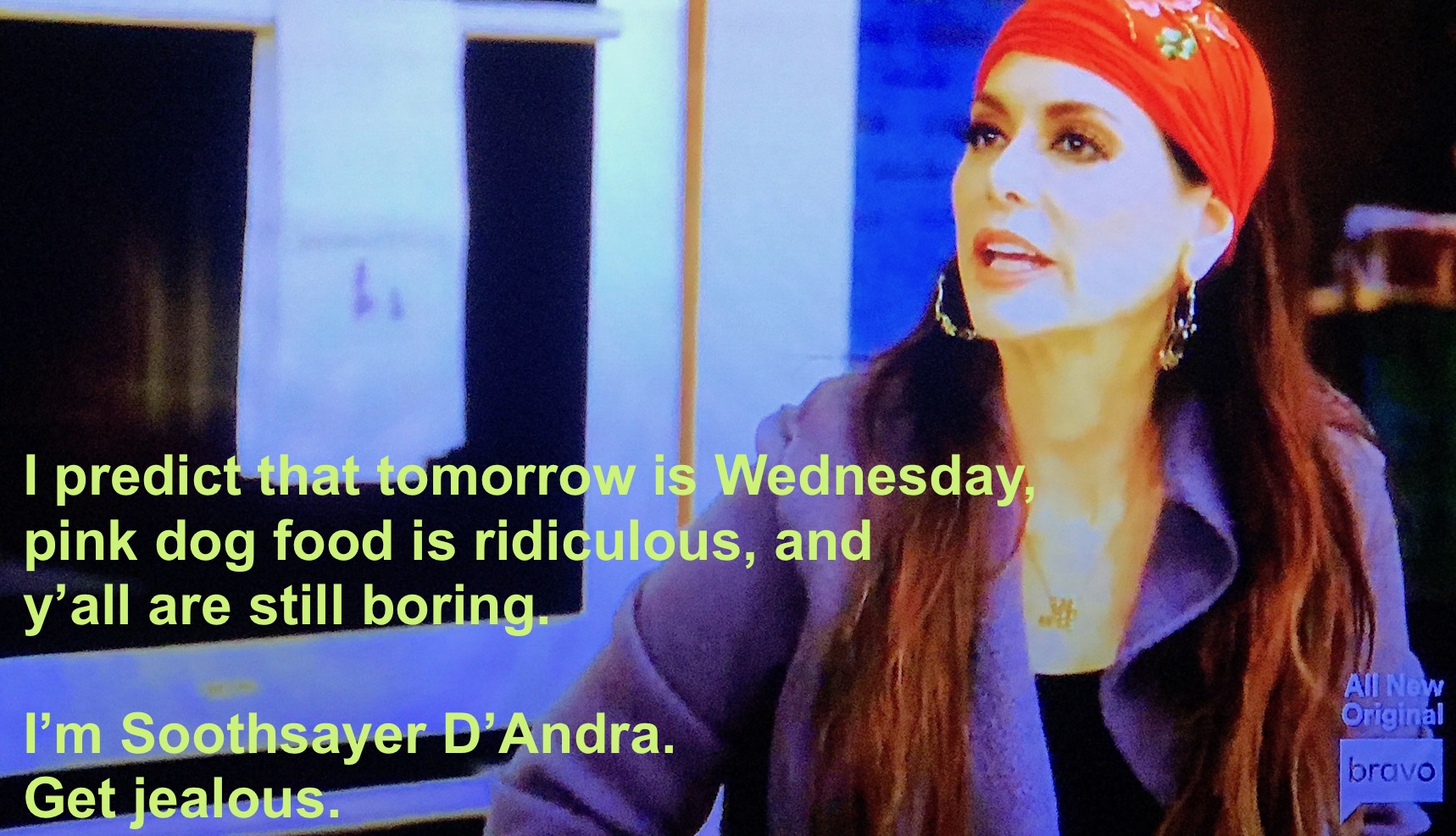 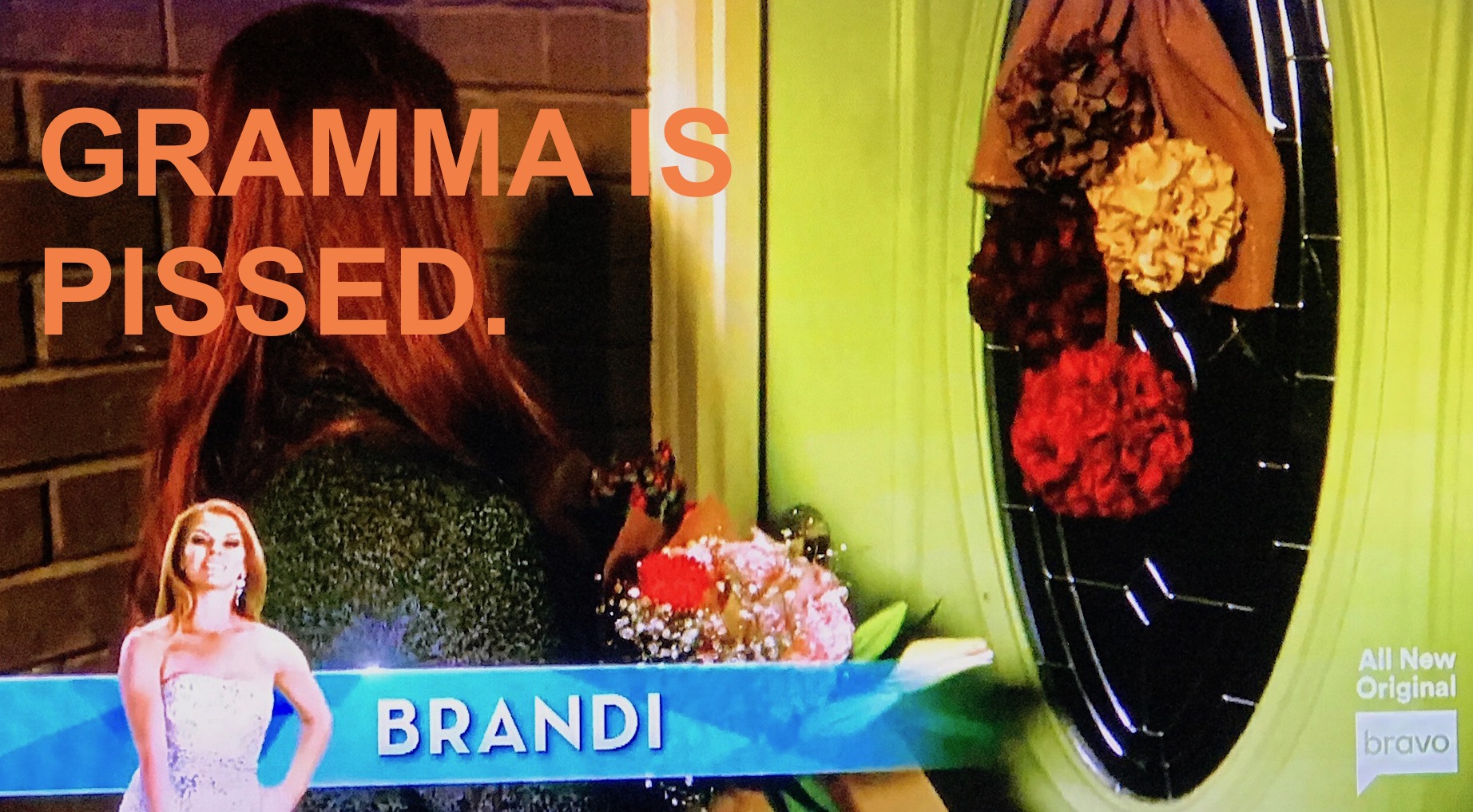 In the preview for next week, LeeAnne calls Cary a See You Next Tuesday. Looks like D’Andra sets up a solid afternoon tea session to create some better TV for us all. From the looks of it, it has all the things every epic Real Housewives fight needs: costumes, fancy crystal and no food around for miles. Here’s hoping it all works out terribly.

Drinking Game for next episode: Every time Stephanie avoids conflict by drinking, you drink. If Brandi ever raises her voice above a whisper, chug. If anyone stands up to LeeAnne for more than one sentence, open a bottle of wine and pour it on your head Flashdance-style.