Yesterday we recorded the second-ever road-show episode of EarBurner, the D Magazine podcast. This time we visited the bar Mac’s Southside on South Lamar in the Cedars. There Tim and Zac were joined by D‘s city columnist, Eric Celeste, and Charles Glover of the Meadows Foundation to talk about the Early Matters Dallas educational initiative.

But don’t let your eyes glaze over thinking about that subject matter. There are more hot-takes-per-minute in this episode than just about any other installment of EarBurner that I can remember. Other areas of focus in their discussion were whether Mayor Gunnar Rawlings’ Dad is right to be excited by a new donation to fund a Trinity River park and the potential for the Trinity Forest Golf Course to be a catalyst for redevelopment in southern Dallas.

Oh, and can you guess how much of the Trinity River flowing through our city is treated wastewater from our toilets that we send downstream for Houstonians to drink? Give the show a listen in the player below, or via iTunes, Stitcher, etc., to find out. Believe me, Tim will be more than happy to tell you.

1. D Magazine bar writer Tara Nieuwesteeg opined about Mac’s Southside this week, complimenting that it is “without a hint of pretension.”

2. The Bimini ring game (Bimini is a district of the Bahamas), also called, “ringing the bull,” involves trying to get a ring attached to a string to arc onto a hook on a post or pole.

3. The recently announced $50 million donation to fund a Trinity River park comes from the estate of Harold Simmons, whom this magazine once called an evil genius. Apologies for the way the lead image on that linked article has cropped its lead image. One of the perils of migrating an illustration originally published in one format into our new website this past summer. Here you can see the image, by Mark Fredrickson, in all its glory: 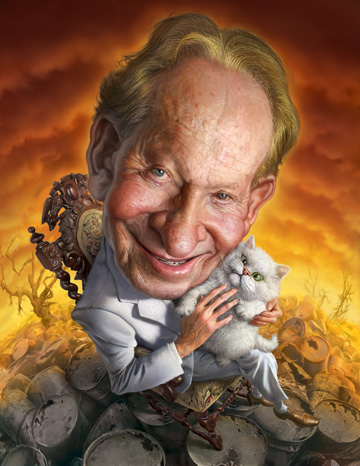 4. Neil Sperry can still be heard talking about gardening Sunday mornings on WBAP.