In the mid- to late-1800s in Dallas, if you were a Freemason or an Odd Fellow, chances were good that when you passed, your body would be interred at a specially designated plot alongside your brethren. If you were married and had children, they could come, too.

Some of these gravesites still exist, many with their original headstones, at a public park called Pioneer Cemetery, a quiet, shaded spot located at Young and Marilla streets, near City Hall. The historically significant site is easy to overlook. It’s modest, while the structures surrounding it, a bronze re-enactment of a cattle drive and the sprawling Convention Center, are not.

The land initially owned by the Masonic Fraternity and the Independent Order of Odd Fellows had been strategically selected for its elevation and distance from the Trinity River. Even in the early throes of becoming a modern city, planners worried about the river’s propensity to take back human endeavor, including cemeteries.

In the late 1800s, if you were a member of the fledgling Jewish community, chances were equally good that a burial spot would be secured courtesy of the Hebrew Benevolent Association. According to Hadassah Magazine: “On July 1, 1872, 11 Jewish men, including Alexander Sanger, founded the Hebrew Benevolent Association to care for the sick and needy; shortly after, they established a cemetery, and that fall they held High Holy Day services in Masonic Hall on Commerce Street.”

The land for the Jewish cemetery, a small tract located off Akard Street, adjacent to the Masonic and Odd Fellows burying grounds, was purchased from Mayor Henry Ervay. In those days, at this particular spot, everybody was together without fuss (at least those in eternal repose).

That is, until 1956. That’s when the remains of all 53 people buried in the Jewish cemetery were moved to another location farther north, following a “friendly” legal suit with the city.

Henry S. Miller Sr., who had a relative buried there and strong ties to the community, acted as trustee for the case, fearing that the city might try to “abate it as a nuisance.” The city — whose former mayor, 84 years earlier, had sold the land to the Hebrew Benevolent Association — now wanted it for the construction of the Dallas Memorial Auditorium (or the Kay Bailey Hutchison Convention Center as it’s now known).

Today, where the Odd Fellows’ section of the cemetery ends, and where headstones inscribed in both English and Hebrew would have been, there’s a wide concrete walkway and a monolithic memorial to the Confederacy. The war sculpture, 60 feet tall at its apex, is difficult to see from the street but impossible to miss when entering or exiting the Convention Center. The monument was moved to its present spot in 1961 from Old City Park to accommodate construction of the R.L. Thornton Freeway.

In all fairness, complications existed for all three cemeteries established by these philanthropic groups long before mid-century construction programs. Reports from over the years include: headstones vandalized (1891); cattle and hogs on premises (1876 and 1945); Santa Fe Railroad workers hauling away “dirt strewn with bones by the wagon load” (1907); proposal for a $1 million warehouse at the site (1922) and so on.

The history of abuse, sometimes at the hands of some of the very people buried there, continued on until all three sections were eventually deeded to the city and declared a park of historic importance (minus any sort of monument with the names of those buried in the Jewish cemetery). Beginning in the 1950s, the City Parks Department assumed maintenance of the site, which continues into the present.

In looking back, it’s possible that flooding from the Trinity River is not the most imminent danger to the remains of our ancestors but rather the ill-advised pursuits of the living in the name of progress. WBAP-TV said as much in its November 13, 1956, report on the exhumation of those buried at the Jewish cemetery: “The historic cemetery will soon be obliterated under the concrete of progress … a reminder that in the midst of its expanding metropolitan life there is death. As always, the dead make way for the living.”

A grandiose summary that ignores the obvious: what obligations do the living have in making room for the dead? How we treat the bones of the city — whether that means its infrastructure, plans for the future, or actual remains of individuals — can tell us a great deal about where were headed. 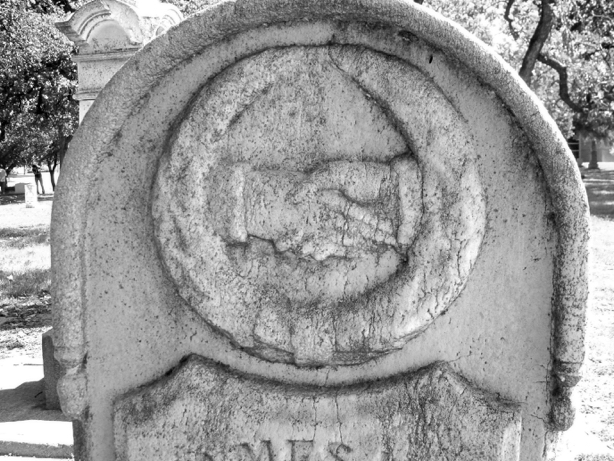 [Editor’s note: an explanation of the Trinity Project can be found here.]