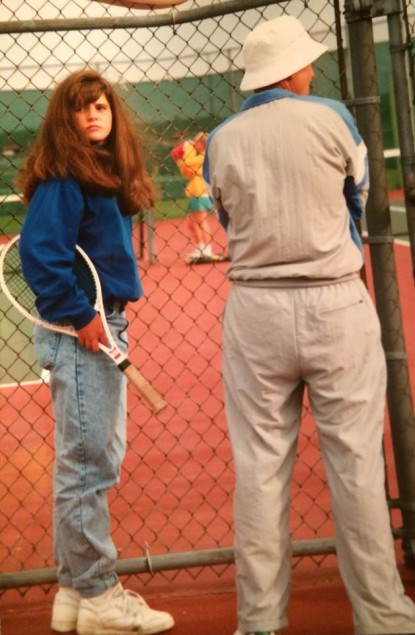 Kathy Wise and her high school tennis coach John Harlow, may he rest in peace from girls with bad attitudes, circa 1989.

It was creepy. I mean, it wasn’t like I was a newbie in the world of stalking or anything. In my former life as a public interest attorney I had utilized Ohio’s first stalking protection law against a deranged cop who was menacing his former girlfriend, following her around in his police vehicle and calling late at night to leave threatening messages of impending bodily harm. But still, when it happens to you, it comes as a surprise—whether or not you have an armed ex-boyfriend with a badge.

In my case, it started innocently enough with an email that was only unnerving in retrospect: “We’ve never met, unless I’m mistaken. Which seems nearly impossible.” The email, from an alleged Tim Rogers, proceeded in true stalker fashion with a personal detail (about my lesbian tennis team with a punny name) and some flattery that effectively served its purpose of disarming me while disguising the more ominous subtext: “I just learned that you are part of an organization called Sets in the City, which is amazing. Don’t ask me how I learned this. Also, I just talked to someone who once worked with you, and that conversation convinced me that you are someone I should know.” And then, with understated charm, he sealed the deal: “Coffee, lunch, beer. Can I entice you to have one of the preceding with me?”

I guess I should have seen it coming, but is it really fair to blame me? I wasn’t asking for it; I wasn’t even looking for a new job. My LinkedIn profile was horribly out of date and I hadn’t updated my resume since I had left my job nearly a decade ago as an attorney with the City of Dallas to make a mid-life career switch to magazines. My hair was overdue for a root touch-up. And I figured his offer of coffee at the Starbucks across from my office at Cowboys & Indians, not somewhere trendy like Pearl Cup or Union, clearly meant that his intentions were pure. Two editors from two Dallas-based magazines simply finding an excuse to step away from their monitors for an over-priced latte that cut into their lunch budgets for the week.

I only became suspicious when I got a call that night from a former co-worker. “Hey,” he said, sotto voce, “I got a call about you.” Long pause.

“What do you mean?” I asked nervously. “Did you get a call from Tim Rogers? Because I’m meeting him for coffee. But it doesn’t mean anything. It’s just coffee.”

“No,” my former co-worker said. “I got a call. About you. From someone else.” Another long pause. “I just thought you should know.” Then the line went dead.

So, I had been warned. But I’m a polite Midwestern girl at heart, the kind who says “No, thanks,” the first three times she’s offered a glass of sweet tea and only accepts after the fourth offer with “Only if it’s no trouble at all” or “If you tell me where the tea bags are I can brew it myself.” I couldn’t possibly cancel.

Turns out, the professional kind of stalking is hard to resist. Especially if the magazine has some of the best writers and editors and creative people in the country. So when Tim asked me to come on board as D Magazine’s new executive editor, I said yes.