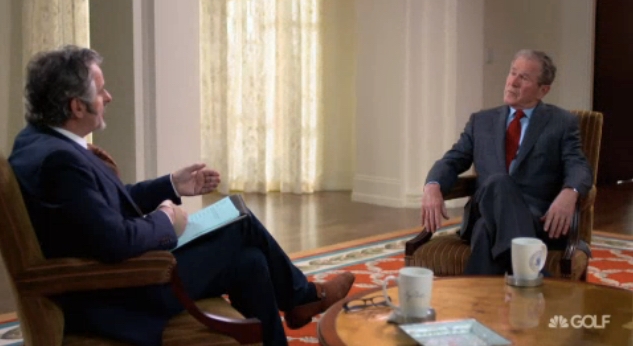 Golf person David Feherty has written the occasional story for  D Magazine. Back in 2009, he wrote an essay for us about George W. Bush moving back to Dallas. Perhaps that essay is what convinced the former president to sit down with Feherty for an interview that will air tonight on Feherty’s Golf Channel show, which is called Feherty. Below, if you care, you can read a press release about the episode and about how well Feherty is doing in the ratings. For now, here’s a taste of what you can expect tonight.

ORLANDO, Fla. (March 17, 2016)– Following Feherty’s record viewership for this season’s two-part premierefeaturing World No. 1 Jordan Spieth, David Feherty will welcome his next guest – former U.S. President George W. Bush – for an interview that will premiere on Monday, March 21 at 9 p.m. ET on Golf Channel.Taking place at the George W. Bush Presidential Center on the campus of Southern Methodist University in Dallas, the former President discusses a number of subjects, including:

An Emmy-nominated television host, Feherty is described as “a smart, funny wild card whose cult celebrity is transcending the sport,” by Rolling Stone, and as “the last unscripted man on TV” by Men’s Journal. He has made a name for himself not only through his self-titled Golf Channel talk show, but as one of the most irrepressible personalities calling golf over the past two decades. A native of Northern Ireland and a former professional golfer who claimed 10 worldwide victories and a spot on the 1991 European Ryder Cup team, Feherty is now a proud American citizen who has risen above a history of alcoholism and addiction to become – in addition to his role as a television host – a New York Times best-selling author and a source of comedic relief for thousands of men and women in uniform.