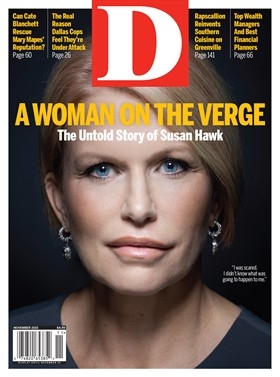 Some excellent writing in this issue of D Magazine, we’ve been told.

The finalists for the City and Regional Magazine Awards for calendar-year 2015 have been named. Please pardon us while we take this opportunity to brag about our team here at D HQ.

D Magazine is up for the biggest prize of the competition — General Excellence — against publications of a similar circulation size as ours. We’re facing off against Cincinnati, Indianapolis Monthly, Portland Monthly, and Seattle Met. Tough competition.

Eric Celeste is a finalist for his column on civic issues. More specifically, we entered his work on the lack of trust between the community and its cops, his profile of Wylie H. Dallas, and his look at political consultant Mari Woodlief for consideration.

The November issue of D Magazine — which included both an exclusive interview with Dallas County district attorney Susan Hawk as she was returning to her job, and a profile of former 60 Minutes producer Mary Mapes as a movie about her controversial story on President George W. Bush’s Vietnam service was being released — is a finalist for excellence in writing.

In “Multiplatform Storytelling,” we scored two nominations, so we’re competing against ourselves and Baltimore, Chicago, and Madison magazines. Our “Best Burgers” package, which began as an online exclusive and then became a print-product feature arguing that Dallas is “Burgertown, U.S.A.” is in the running, along with our July real estate feature about the incredibly hot Dallas market and the digital Neighborhood Guides we created to accompany it (and have since expanded).

Congratulations to everyone who contributed to these efforts. The winners will be revealed at the annual CRMA conference in May in Denver.