Now that we’ve gotten the fear-inducing headline out of the way, let’s dial things back by noting that even though the United States Geological Survey says that the risk of earthquake damage in North Texas is 10 times greater than it was in 2014, that risk remains only between 2 and 5 percent.

Which, true enough, is the same risk people is some parts of California are facing, according the forecast the USGS has released. But thank your stars that you don’t live in Oklahoma: 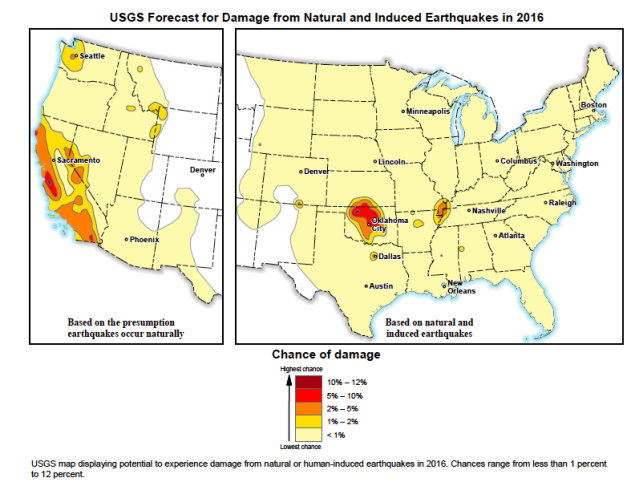 Our risk has increased, sensibly enough, because we’ve had so many more earthquakes in recents years. Says the AP:

In the Dallas-Fort Worth area, for example, there were nine earthquakes that measured 3 or more on the Richter scale from November 2014 through 2015, Williams said. The biggest in the Irving-Dallas area was a 3.6 earthquake that occurred on Jan. 6, 2015, he said.

“We have anecdotal data of people experiencing the earthquakes, cracks and things falling off shelves,” [Rob Williams of USGS] said.

As to why we’re seeing so much more earth-rattling, the USGS report essentially says, “We can’t 100-percent definitely state that it’s because of natural gas drilling-related activity, but come on, people.” Or, in their stilted government language:

In this report, referring to earthquakes and seismicity as “induced” or “potentially induced” indicates that the seismicity in a given region has shown an increased earthquake rate that can be attributed to human activities, such as fluid injection or extraction (Segall, 1989; Segall and Lu, 2015). We acknowledge that this classification is based on circumstantial evidence and scientific judgment and that a lack of relevant technical information on the geological condition, state of stress, and human industrial activity (such as injection well pumping data) makes it difficult to assess seismic hazard. In this report, however, we do not explore the causes of the increased seismicity, but rather we try to find a way to quantify the associated hazard. Because regions of induced seismicity are identified by sharp increases in the rate of earthquakes in a particular area, we consider induced earthquakes to be earthquakes within a certain area and time window that have been provisionally identified by the science literature and local expertise.

Of course, those who insist that there’s no reason to believe that fracking and wastewater disposal have anything at all to do with increased seismic activity will undoubtedly look at this map and point out how much gray there is where earthquakes aren’t occurring: 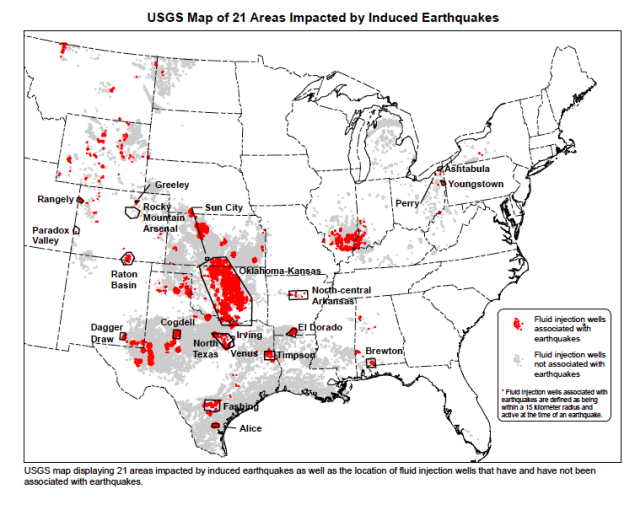 To those people, there is but one appropriate response:

The warming begins, just as we begin to assess the damage.
By Matt Goodman
Local News

Merry Christmas from all of us to all of you. Be safe out there.
By Matt Goodman
D Magazine Directories