The unions don't like his plans for combatting a spike in violent crime.
By Jason Heid | March 28, 2016|3:39 pm
Advertisement

Zac mentioned in “Leading Off” that some within the police department were already expressing displeasure with the chief’s plans even before he’d fully laid them out for the council. Now that he has, it’s easy to see why officers might react negatively, considering that Brown is making drastic changes to the shift schedules of hundreds, requiring them also to conduct many more foot patrols of troubled neighborhoods, and adding service on task forces to their regular duties.

“It all has to happen yesterday, because the summer is approaching,” the chief said, citing the fact that warmer temperatures generally bring with them an uptick in crime. (The practical non-existence of the usual winter weather the last couple months was among the explanations Brown offered for the alarming increases that have also seen assaults, robberies, and burglaries trending upward in the early going of 2016.) 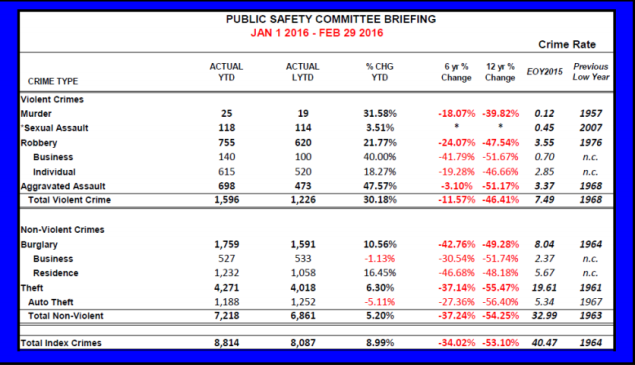 For his part, Chief Brown spoke with full confidence in his plans, issuing a warning to bad guys that his redeployment of department resources and the commitment of his officers will succeed in ensuring this spike in crime is just a temporary blip.

“This would be a very good time for criminals to leave our city and never come back,” he said.