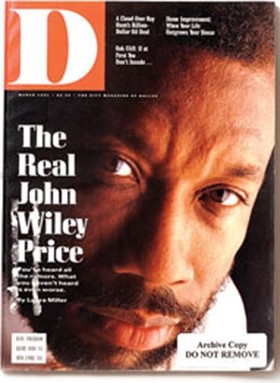 Yesterday, County Commissioner John Wiley Price sent an apology letter — of sorts — to the staff of the radio station where Monday’s dust-up with Dwaine Caraway went down. You can read the whole thing, if you like. He doesn’t apologize for what he did, for grabbing one of Caraway’s staffers by the neck. He apologizes for “not anticipating the meltdown that occurred in your station.” Strange thing to apologize for. Not anticipating the meltdown. Here’s the passage I find most interesting:

In retrospect, it should’ve occurred to me that what I and others believe now to have been a concocted or “staged event” could have been anticipated. Mr. Caraway’s public record is littered with dramatic performances from the distant past up to the present. And whether it was the highly publicized Super Bowl spat between Archie and Arthur; his eight years as a featured thespian at City Hall, or the phantom threats against his life and property that require an exceptionally large entourage and the presence of bodyguards, I should have been more keenly suspect of anything that he said that day. I was totally focused on his politics and was not aware of his employment of poli-tricks.

It’s an interesting tack he has taken. Again, here’s the video that shows the context for what set off the meltdown, if you haven’t seen it: