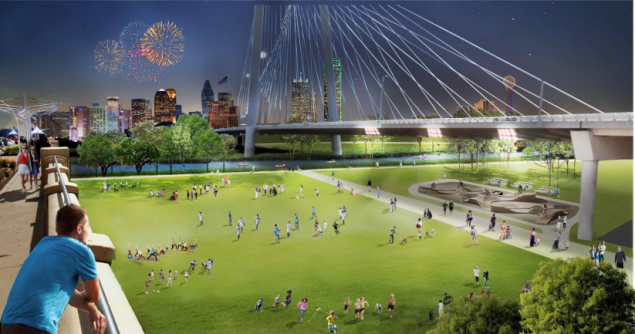 Could be a real jewel for the city, there’s no doubt.
Photography By: Rhiannon Lee Photography

So reports the Morning News this afternoon:

Dallas Mayor Mike Rawlings today sent word to his fellow City Council members that the citizens advisory committee will include project champions Ron Kirk, a former Dallas mayor; Lee Jackson, a former Dallas County judge; and Mary Ceverha, a Trinity Commons Foundation board member. On the flip side, it will also include vocal project critics Rafael Anchia, a state representative from Dallas; Angela Hunt, a former council member; and Robert Meckfessel, another Trinity Commons board member.

It’ll be this committee’s task to decide whether whatever technical solution government staffers come up with to reconcile the proposed toll road with a park alongside the river fits the pictures the “dream team” got everybody all hot and bothered over last year.