The League of Women Voters of Dallas Is Officially a Joke

The League of Women Voters of Dallas Is Officially a Joke 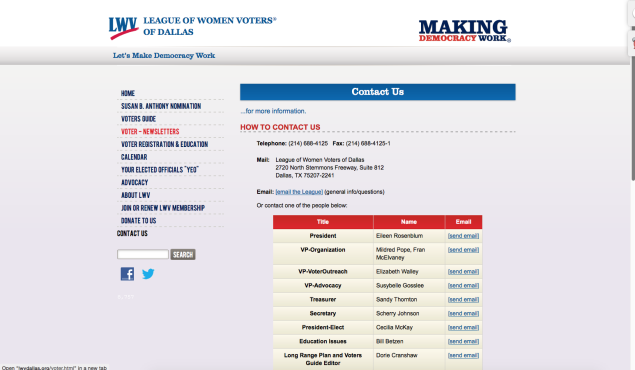 Have a peek at who the League of Women Voters of Dallas — ostensibly, a nonprofit that educates voters — has made its director of education issues.

I would write HAHAHAHAHA for about 10 lines if it weren’t so serious. I mean, Bill Freaking Betzen, the chief online troll and puppet for every status quo clown in the city. A person who wants DISD to go back to the days when we had feeder patterns where 1 percent of young black men graduated college ready. They may as well have made #TalkDISD the League’s official hashtag. No wonder the League’s “fact sheet” was so riddled with obvious errors, red herrings, and lies. C’mon, League. Pull yourself together. You used to be a respectable organization. Do you want to be more irrelevant to the next generation?

See how the school has changed in the last 70 years.
By  Jason Heid
Dallas History

Look back more than 70 years to when there was still plenty of school spirit downtown.
By  Jason Heid
Dallas History

How have students changed in the last 60 years?
By  Jason Heid
Dallas History

Can you tell when this photo was shot?
By  Jason Heid
D Magazine Directories