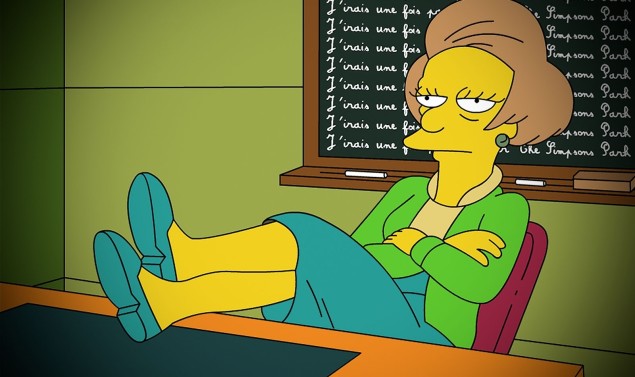 Nearly a month ago, the Dallas ISD board was given a briefing on the impact of the district’s revolutionary Teacher Excellence Initiative (TEI), the evaluation and scoring system that determines a teacher’s effectiveness and pay. I didn’t write about the briefing then because I was knee-deep in covering the DISD bond. Now that the bond passed, I want to tell you the important takeaways from the TEI data, because the findings and results are pretty amazing.

That’s not to say that there aren’t ongoing bugs and glitches in the system – important ones that need to be addressed. (I wrote about some concerns last year, and these were largely addressed.) I’ll write about those soon. First I want to talk about the big lessons from the TEI data that should change the way we think about public education and could change the way districts operate.

If you want to follow along, you can pull up the background materials provided to the board and the slideshow of highlights that was presented. If you want to see the presentation itself, go here and click on the “meetings” tab, then click the 2015 tab on the left. Then hit the Oct. 15 briefing agenda and click on the video presentation marked TEI. I can’t link directly to it.

First, some background. We’ve talked a lot about TEI, but as a reminder, it’s a system that evaluates teachers based on student outcomes,  evaluations from certified administrators, and student surveys. (I’m simplifying this a lot.)  Evaluations count the most, student outcomes a little less, and student surveys a little less than that. (Except when that’s not true; it’s calibrated differently by grade/subject. Also, as was pointed out in the comments, I’m ignoring something called SLOs, because those are complicated and are a small percentage of most evaluations. The link two graphs above is a deep dive into all this if you care.)

This is a radical departure from the way teacher pay has been determined at DISD since 1894, when Superintendent J.L. Long first instituted a seniority pay scale. So for more than a century, the only metric used when determining pay for teachers has been a calendar. (Well, that and a higher degree; more on that later.) Under TEI, experience counts in certain ways — first- and second-year teachers are capped as to how high an evaluation category they can be placed, for example — but much more data is considered. The hope was that a more equitable system would get rid of bad teachers, as well as attract and retain good-to-great teachers.

What was the result of its implementation? The first important slide in the presentation is this one: 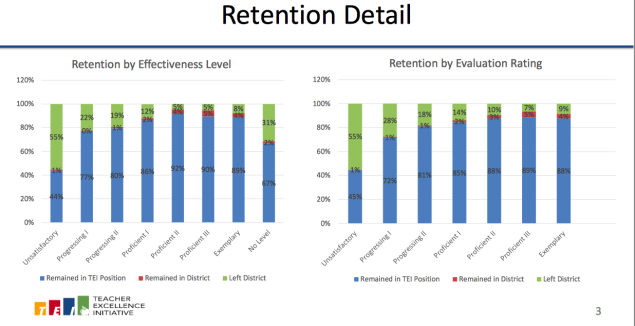 Ignore the difference between “evaluation” and “effectiveness” for now. No reason to get glassy-eyed over a small distinction that we’ll discuss later. The point is this: The majority of teachers who left the district were those who were either not graded or were graded as “unsatisfactory” or “progressing.” Those who graded out as “proficient” or “exemplary” stayed in much greater percentages.

Do you know how important this is? If a merit-pay system is identifying and driving out your worst teachers — and therefore is identifying and retaining your best teachers — that is a recipe for a dramatic turnaround in any public school system, let alone a large urban district. (That is if you believe, as studies have consistently shown, that the greatest influencer of a poverty-stricken student is a great teacher, and that the greatest detriment to the outcomes of that same student is a bad teacher.)

I know that the headline “Great teachers remain in DISD as bad teachers flee” isn’t sexy, but it’s important. You should know this is happening.

What does this mean for the pocketbooks of good teachers? Aside from individual and unique flaws in the system — which, as I said, we’ll look at soon — it means great things. Look at this chart, which is farther down in the slide presentation. 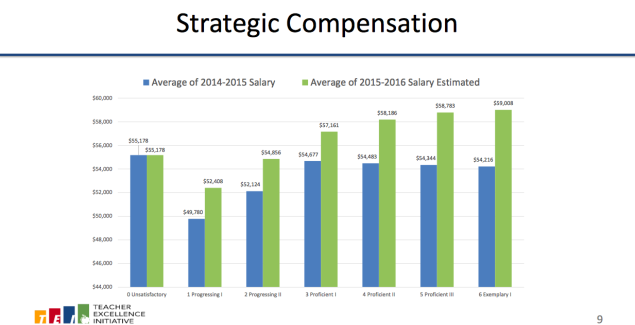 See what it’s saying? Basically, the teachers who scored the poorest under TEI, while still making too much money, didn’t see a collective raise. Meanwhile, it shows that the old calendar-pay system was not rewarding the district’s best teachers, and that now the best teachers are seeing raises commensurate with their excellence. When you realize that every group of teachers in DISD, including its best teachers, were earning less as a group than the WORST teachers in the district before TEI, you see how broken the old seniority system really was.

I think that’s the most important takeaway from the first-year TEI data: bad teachers are leaving, good teachers are staying, and DISD is now paying good teachers more money. Tomorrow, we’ll look at some other interesting data points and what they say about the district’s continued efforts to transform itself.

Dallas’ most important news stories of the week, delivered to your inbox each Sunday.
Learning Curve TEI

We Asked Teachers: Should State Lawmakers Be Required to Serve as Substitutes?

Lawmakers in Louisiana are considering a proposal that would have state representatives serving as volunteer substitute teachers to get a better idea of what teachers face. We asked North Texas instructors if they thought Texas should do the same.
By Bethany Erickson
Local News

Teachers Are Quitting. Convincing Them To Stay Will Take More Than Money.

After two years of pandemic teaching and a whole lot of burnout, more teachers than ever are considering leaving the profession. Here's what one survey says might convince them to stay.
By Bethany Erickson
D Magazine Directories