Experience and degrees not enough information to base pay raises on
By Eric Celeste | November 17, 2015|8:29 am
Advertisement 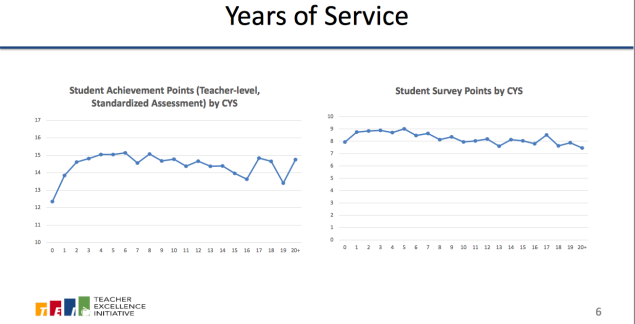 Over the weekend, I had beers with a Dallas ISD middle school teacher. Longtime teacher, moved here from another state just this year. Good guy, smart guy, has a master’s degree, etc. We finally got around to talking about DISD’s merit pay system, which I wrote about a little last week. (And which Jim Schutze wrote about yesterday, covering some of that ground and some of the ground I’m about to cover. You should read it.)

“You know, hate the evaluations, and all the work that goes into the standardized lesson plans, hate getting evaluated by students – all the complaints I hear in the comment sections.”

He looked at me like I was an idiot. “TEI is why I came here.”

This teacher’s point: In his 30s, he was still young by teaching standards. He was in a new city. It would take a while for him to make the sort of money he thinks he’s worth in a strictly seniority-based system. “I want to get paid because I’m good at what I do,” he said.

That’s the promise of TEI. Like I wrote about last week, it can help the district identify and get rid of bad teachers, and better reward good teachers on a system based on multiple data points other than a calendar. But the data (which you can read or see presented at the links on the previous post) also hold a couple of other important takeaways. The first one is contained in the chart at the top of this post:

• Student achievement and experience – AFTER six years of service – are not correlated. In some cases, it becomes negatively correlated. This means that years of service cannot serve as a proxy for excellence. (But, because you’re a reasonable person who exists in the real world, you already assumed that.) Now, I don’t know what this means other than these three things:

1. The learning curve for a teacher is steep, and there is no substitute for experience in his or her first five to six years or so.

2. After that, something happens – if I knew exactly what, I’d be rich – but you can no longer assume that more experience equals more excellence.

3. Rewarding people just for years of service — in fact, making that the primary metric upon which you based your pay scale — made absolutely no sense.

• The second major point was that advanced degrees, the only other metric that used to be considered when paying DISD teachers, were NEGATIVELY correlated with student achievement and student satisfaction. Here’s the chart: 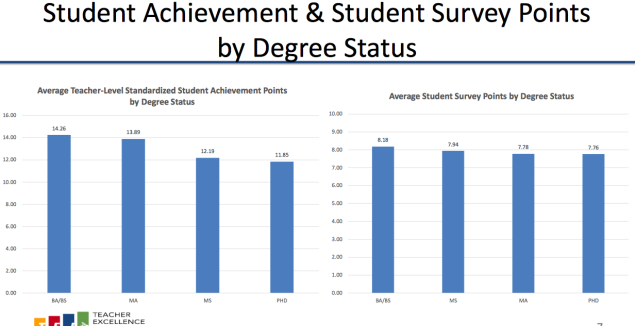 There could be a million reasons for this, but you should know a couple of things about this finding:

1. It completely squares with the research on this subject, going back a few decades. There are a ton of studies that deal with this, but luckily this one is a meta-study that summarizes much of the research. See especially section 2.1, which contains this summary graph: http://www.edweek.org/media/eperc_qualityteaching_12.11.pdf

Although the nation is witnessing a major push to promote performance-based pay for teachers, nearly all current teacher-compensation systems are built around the dual pillars of seniority and degree acquisition. These systems, for example, generally provide stipends to teachers who earn a master’s degree or otherwise rely on a salary schedule that rewards teachers for earning advanced degrees or course credits. Nonetheless, evidence that such degrees contribute to student achievement is limited. Some studies indicate that a teacher’s advanced degrees in mathematics and science are positively related to student achievement in those subjects in high school, but evidence does not apply more broadly to other academic subjects or grade levels.

2. Nevertheless, the district still sees value in pursuing advanced degrees because, obviously, lifelong learning is a trait you want in any employee, especially a teacher. (This point was made during the board presentation by a district official.)

3. If you read that research, you’ll see that some advanced degrees correlate to student achievement. But those are advanced degrees in math and science. The vast majority of teachers have master’s degrees in education. Which, as Schutze notes, “That may be the most important finding so far in TEI, because it is the one that points most directly to the entire public education establishment.”

Now, you can find things like this put out by education institutions that say advanced degrees make you a better teacher. But a) it mostly talks about how teachers will make more money (because most systems still pay more for advanced degrees); b) and its says that advanced degrees correlate to higher NAEP scores, but it doesn’t note that most folks with higher degrees teach in more affluent areas, which leads to higher scores; if you control for poverty, advanced degrees generally do not correlate to achievement.

The sad thing is that all of this will be spun by the status quo commenters as “teacher bashing.” Which is ridiculous. This system is trying to better provide teachers specific, actionable ways that they can improve, and then pay them more as they improve. It’s trying to recruit folks who make a difference in student outcomes. It’s saying that master’s degrees from programs of rigor are better than edu-factories. It’s helping identify the best teachers so those folks can be paid more to teach at the worst schools (under the ACE program), because you want your best teachers taking on your greatest challenges. And so on.

The point here is that this is so important because what matters more than ANYTHING ELSE in helping poor kids learn is great teaching. And if that really matters most, Dallas ISD must recruit, reward, and retain great teachers. That’s what TEI is trying to do.

Does that mean the system if perfect? Of course not. Far from it. I’ll get to some of the specific problems that still need to be fixed in my next post.

Dallas’ most important news stories of the week, delivered to your inbox each Sunday.
Learning Curve Teacher Excellence Initiative

We Asked Teachers: Should State Lawmakers Be Required to Serve as Substitutes?

Lawmakers in Louisiana are considering a proposal that would have state representatives serving as volunteer substitute teachers to get a better idea of what teachers face. We asked North Texas instructors if they thought Texas should do the same.
By Bethany Erickson
Local News

Teachers Are Quitting. Convincing Them To Stay Will Take More Than Money.

After two years of pandemic teaching and a whole lot of burnout, more teachers than ever are considering leaving the profession. Here's what one survey says might convince them to stay.
By Bethany Erickson
D Magazine Directories