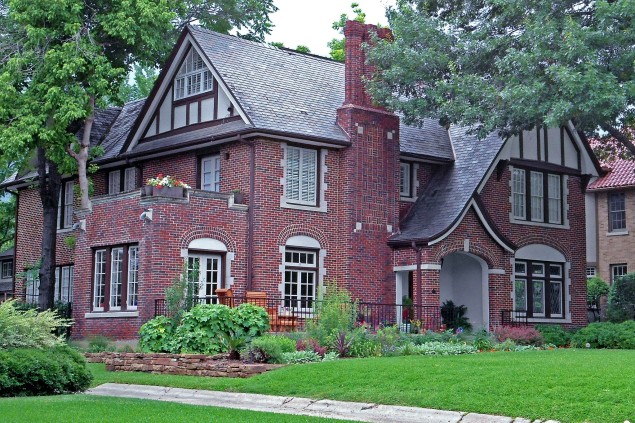 What does this Dallas house have in common with the ziggurat of Ur? (Photo: Steven Martin/Flickr)

We’re used to it, because this is where we live, where seemingly everyone has a brick house. But Gaile Robinson addresses the matter in the Star-Telegram:

The reason is simply geography and geology. As any gardener knows, our soil is loaded with clay, which is not great for gardening but is excellent for brickmaking. There is a large vein of clay that stretches across the United States from Central Texas, across Oklahoma and Arkansas, and up into Virginia and Maryland.

It has, in varying degrees, the right combination of clay, sand and silt for brickmaking. Within the belt is an ideal band called the Wilcox formation that has no iron in it, making it even better for brickmaking. It runs from San Antonio up to Arkansas. North Texas sits smack in the middle of the mother lode of brickmaking clay.

Most of it is under what the brick manufacturers call “overburden,” a very distressing term for trees, grass and other attractive organic matter.

Once the overburden is scraped off, the clay is removed in a strip-mining fashion that leaves very large terraced pits. Often the clay plays out and the pits are filled, making lakes. Some clay reserves are still producing, though, even after 100 years of mining.