Reason No. 1 to Vote For the DISD Bond: It Helps Kids

It helps kids in every area of the city, in many different ways
By Eric Celeste | October 30, 2015|1:50 pm
Advertisement 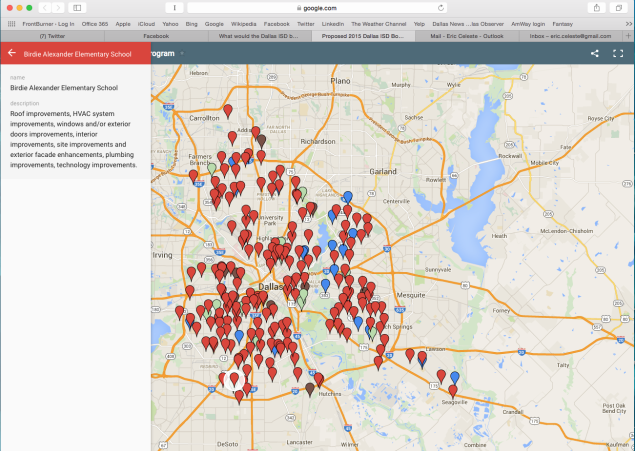 Today is the last day to early vote, so I’m going to give you the best reason to vote for the $1.6 billion DISD bond, in hopes it will inspire you to get off your butt and go vote. The reason: It helps kids all over the city. That may seem obvious, but I think it’s important to remember.

The bond is good for kids for several reasons:

First, this bond is equitable, in that it helps schools all over the district. Take a look at the full Google Maps list pictured above to see the distribution. Even though there is a prioritization schedule that takes into account age and condition of the buildings, it’s not all that was considered. Programmatic changes to pre-K, school choice, and career and technical education were considered. Neighborhood needs and desires were considered. The Future Facilities Task Force met every month for a year as a whole and then many more times in sub-committees. Between the FFTF and the DISD administration, more than 50 meetings with community members were held to discuss needs.)

You can see the result from the map: in really rough numbers, 65 percent of the money goes to the southern and western sectors of Dallas, and about 35 percent to the northern and eastern areas. This is roughly equivalent to enrollment.

Does it fix everything? No. The Parsons Report upon which the work of the Future Facilities Task Force was based said that just to maintain the status quo in the current buildings would cost $3.2 billion by 2020. Which stands to reason, given the median age of DISD facilities is about 50 years. By which I mean to say, this noise is expensive. But the district isn’t borrowing this full amount, because they’ve kept the price tag on this bond fiscally responsible. (More on that Monday.) But it is fair and addresses as much as can be fixed, improved, or built.

Second, as noted, the bond helps kids in terms of improving or allowing the implantation of important programs and initiatives. This bond:

Again, these are going to bring educational opportunities for kids all over the district. H.S. Thompson in South Dallas gets rebuilt, while Roosevelt and Carter in southern Dallas get major career and tech expansions/renovations; Skyline gets $35M in renovations over in Buckner Terrace; Pleasant Grove gets a new school; kids in Wilmer get a new a elementary school; Rosemont in Oak Cliff gets replaced with a school that isn’t 100 years old and that finally will have age-appropriate classrooms; Pinkston in West Dallas gets a gleaming new campus with a career and tech focus; Hillcrest in North Dallas gets an overhaul; capacity relief comes north and east for Hexter, Sanger, Bryan Adams, T.J., Marsh, and others. That’s just a sampling.

To reiterate: This plan was made in alignment with big-picture changes designed to raise student outcomes, and helps kids throughout the entire geography of DISD. It is an unquestionable win for the kids. On Monday I’ll tell you why it is also a win for the adults.

Dallas’ most important news stories of the week, delivered to your inbox each Sunday.
2015 DISD Bond Learning Curve

The March 10 event will focus on workforce pipeline initiatives—where they're headed and what it means for the North Texas business community.
By Will Maddox
Local News