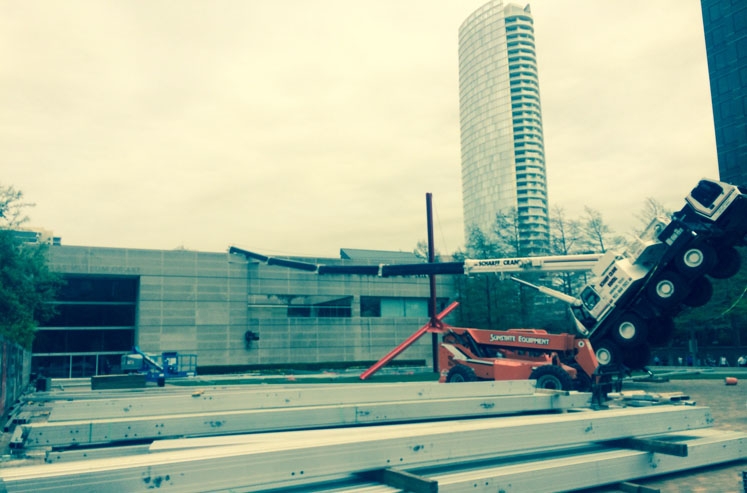 This morning at 9:30 a.m. a crane being used to construct a massive tent on the plaza at the south entrance of the Dallas Museum of Art toppled over and crashed into the museum.

According to a statement released by the museum, the operator was injured during the accident and taken to the hospital via ambulance. No works of art were damaged, but the crane gouged a hole in the front facade of the Edward Larrabee Barnes-designed museum and damaged part of the roof line. Luckily, the crane just missed the large sculpture Mark Di Suvero sculpture that sits on the museum’s front lawn.

The tent was being raised for the museum’s annual Art Ball fundraiser set to take place next Saturday, April 11. It is not the first time the Art Ball staging has damaged the museum. Last year concrete steps leading to the plaza had to be replaced after they were damaged during installation of the tent, and the year before the entire front lawn of the museum had to be re-sodded. There is no word yet as to whether or not the Art Ball will be postponed or moved.

Here’s the full statement from the DMA:

At approximately 9:30 this morning, a crane was being used to assemble a tent for a Museum special event.  During the installation, the crane fell and currently rests atop the south end of the building.  The operator was injured when the crane fell. He was ambulatory when the ambulance arrived on the scene.  No works of art were damaged during the accident.

Of course, our primary concern is for the well-being of the crane operator, as well as the safety of our visitors, staff, and volunteers.  The south end of the Museum is closed until further notice but the Museum will open today maintaining normal business hours.