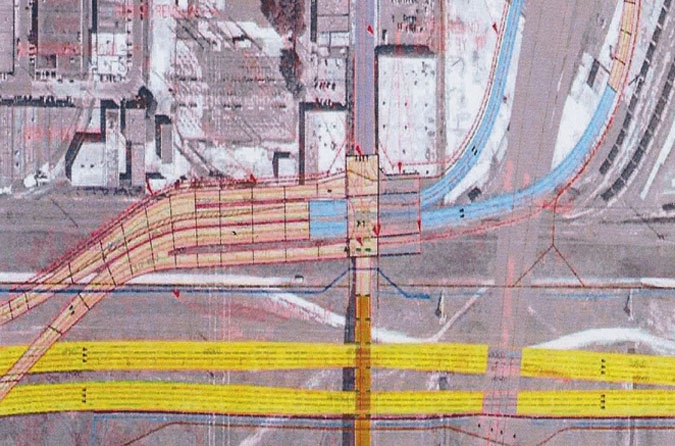 Here’s an interesting document that has turned up. Last November, Mario Sanchez, a historical architect with the environmental affairs division of the Texas Department of Transportation, wrote the Texas Historical Commission to lay out a preliminary design of the interchange between the proposed Trinity Toll Road and the Continental Street Viaduct. It offers a detailed account of just how the current design of the Trinity Toll Road – aka Alternative 3C, as it is called in official documents – will impact the Continental Street Viaduct, namely, by demolishing 195 feet of it.

As you may remember from last week, the Trinity Toll Road includes plans to build exit ramps that will connect the road both to Woodall Rodgers Freeway and through the recently improved Continental Bridge Viaduct pedestrian bridge. Only the Trinity River Project would create a pedestrian bridge and then run an exit ramp of a limited-access, tolled highway through the foot of it. Kiss any connectivity between the bridge, the park, and the most direct route into the Design District, Riverfront, downtown, and Victory Park goodbye. This is what we call really solid urban planning.

Well, it gets richer. During the discussion about the exit ramp at the city council meeting last week, Assistant City Manager Jill Jordan explained that some of the railing of the Continental Bridge would have to be removed to accommodate the new exit ramps. However, the reality is that the new exit ramps will, in fact, require the demolition of 195 feet of the historic viaduct. So why the discrepancy?

As the correspondence between TxDOT and the THC explains, as the toll road is currently designed, there is simply no way to avoid the demolition. Building the ramps underneath the existing arches is too dangerous. Building them over would require the ramps to also fly over the Margaret Hunt Hill Bridge. In addition, the “diaphragm wall” that the US Army Corps of Engineers has currently proposed to run into the levee to protect against the impact of the toll road, will mean that the arches of the Continental Bridge that currently cross over the levee will have to be removed.

How does TxDOT justify its ability to demolish 195 feet of a historic landmark? Well, two reasons.

The first is a clever little linguistic switcheroo. The section of the bridge that is going to be destroyed is on the opposite side of the levee from the floodplain. According to TxDOT’s argument, the historic Continental Street Viaduct is the bridge that spans the two levees. Once you get past the levees, that part of the bridge is simple the “approach span.” Listen to this lovely bit of bureaucratic banter:

“The north approach spans have historically remained as a separate segment of the viaduct from that of the floodway due to the visual obstacle presented by the earthen levee and the awkward, narrow dimensions of its arched spans.”

I think this is why Sandy Greyson was so confused during the open mic section last week. She asked assistant city manager Jill Jordan about piers that she believed were supposed to be demolished so the Trinity Toll Road could traverse underneath the Continental Bridge.

A flustered Jordan shrugged and acted completely confused by the suggestion of removing the bridge piers.

“Let me double check, but my understanding is it goes through [the existing arches],” Jordan told Greyson.

Greyson asked Jordan to follow up with her with a clarification, but I think we have the clarification right here in this letter. What Greyson likely saw are these pictures which show the “approach span” demolished to allow for the Trinity toll road exit ramps to intersect with the pedestrian bridge and connect to Woodall Rodgers. Jordan, on the other hand, was also technically correct if she was referring only to the other side of the levee where the main artery of the Trinity Toll Road is designed to flow underneath the arches of the Continental Bridge — that is, the part of the bridge that hasn’t been reclassified as “not a bridge” by TxDOT. See, it’s all just language. “Span” is not “bridge” to Jordan and TxDOT. Greyson, since she was in the council chambers and not standing in the floodplain with the levee-obstructed view of the bridge, still understands the span as part of the bridge. You could probably teach philosophy class on linguistics and phenomenology just based on this stuff.

Anyway, in the end none of this really matters because what the toll road pushers have in their back pocket is the legislative trump card to end all legislative trump cards, which Sanchez drops at the end of his letter. This trump card is an incredible piece of federal legislation called the Supplemental Appropriations Act of 2010, i.e. Public Law 111-212 section 405(b). This is what the law states:

The Federal Highway Administration is exempt from the requirements of 49 U.S.C. 303 and 23 U.S.C. 138 for any highway project to be constructed in the vicinity of the Dallas Floodway, Dallas, Texas.

That’s it, so simple. It’s such a modest and unassuming little piece of federal law. If you are wondering what it means, well 49 U.S.C. 303 and 23 U.S.C. 138 are laws that set out approval processes and oversights intended to help preserve lands, wildlife, waterfowl refuges, parklands, and historic sites. According to Public Law 111-212 section 405(b), when it comes to the Dallas Floodway, the Federal Highway Administration can just throw those environmental and historical regulatory measures out the window. In other words, when it comes to the historic nature of the Continental Street Viaduct or the environmental preservation of the Trinity River Park, TxDOT can do whatever it wants, because federal law removes the Dallas Floodway from the oversight of federal law.

I mean, if I was watching House of Cards, I would find this to be a titillating little Machiavellian maneuver. But this isn’t TV, it’s our city, our parkland, and our history. At the end of the day TxDOT and the city of Dallas have full federal authority to do whatever they want with the historic Continental Street Viaduct, including demolishing 195 feet of it for exit ramps of a toll road. Call it a span, call it a bridge, call it what you want. I’ll stick with calling it a screw job.