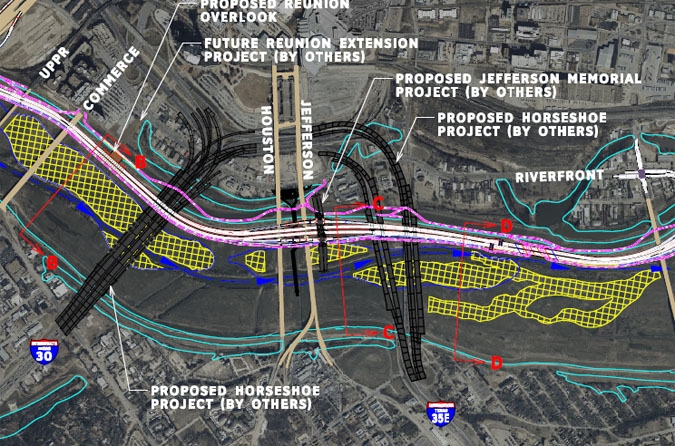 This morning the Dallas Business Journal ran a commentary piece by Alice Murray, President of the Dallas Citizens Council, and I couldn’t help but wonder that if this had been 2006, the article would have appeared in the Dallas Morning News. Regardless, in the DBJ, Murray argues that we should build the Trinity Toll Road. Why? Well, because Dallas:

Quick: What do DFW Airport, DART, Victory Park and Klyde Warren Park have in common?

Answer: All began as major public improvement projects that Dallas leaders were wise enough to support, and all have paid off big time in providing massive economic, social and cultural benefits to Dallas and the surrounding region.

And here’s another thing that they all have in common: All had vocal opponents who predicted all sorts of doom and gloom if these projects went forward.

Leaving aside the obvious (VICTORY PARK WAS A MASSIVE ECONOMIC AND URBAN PLANNING FAILURE!!!!! DART IS ONE OF THE WORST PERFORMING PUBLIC TRANSIT SYSTEMS IN THE UNITED STATES!!!!), it sounds like what Murray is saying is that our wise leaders have dreamed up projects in the past, and those projects have had opponents. Now, these wise leaders have a new project, and that new project also has opponents. And so, indulging in a little post hoc ergo propter hoc, Murray concludes that the toll road must be good. Now shut up and get in line.

Murray then lays out a few points for supporting the toll road, most of which you’ve heard before and, likely, recognize to be bogus. The limited access, six-lane highway running through Dallas’ large urban green space will, she says, “protect our community’s core,” “ease traffic congestion,” “provide recreational activities,” “create jobs and commerce,” and “promote social cohesion.”

Murray then announces the launch of a disinformation campaign, a website that sets these points to pretty pictures and includes a FAQ page that tries to discredit opposition. How toll road backers manage to recall the 1998 bond election and the 2007 Trinity referendum as voters demanding the version of the toll road currently undergoing a federal environmental review as democracy-in-action and still keep a straight face baffles me. But ignore me. I’m just “some folks in the news media” going about exaggerating things, as the FAQ characterizes it.

Well, needless to say, I was getting all hot under the collar about this latest little lying spree, thinking we were going to have to walk through all of it again. You know the routine:

Do we need to build the road for flood protection? No, the road has greatly complicated flood control plans. So why do we need the road?

Do we need to build the road for traffic congestion? No, because projections demonstrate that the road won’t actually significantly improve traffic congestion in the Stemmons corridor, and since the NTTA won’t release their latest traffic studies, there’s no reason to believe that they still don’t think there will be enough drivers on the proposed road to float the cost.

Do we need to build a toll road to provide recreational activities? No, because the road is draining the resources that were supposed to go to the park that was the backbone of the effort to sell the Trinity River Project to the voters in the first place. The road is what is in currently in the way of providing recreation, and the justification that the building of the road to offset the cost of building lakes was proven false years ago.

Do we need to build a toll road to create jobs and commerce? No, because no one has been able to demonstrate that this particular parallel freeway is going to create any significant economic development at any point along the corridor. Moreover, what we have heard is that developers fear that their investments near the Trinity will be negatively impacted by the road and various ramps. Furthermore, we now understand that this kind of road building is largely responsible for a pattern of economic development that exported the value of Dallas’ urban core northwards, while Dallas’ limited success with adding population and jobs over the past decade has come from the growth of dense, connected neighborhoods, not building roads that further disconnect us from our jobs, our city, and each other.

Do we need to build a toll road to promote social cohesion? No, and the most infuriating and disingenuous argument of the bunch. The idea that a pay-to-drive road will help bridge the racial, historical, economic, and political divides that separate the north and the south of the city – a divide that is, in part, a product of decades-long and sometimes systematic disinvestment and orchestrated institutional neglect at the behest of the very “wise leaders” Murray asks us to blindly follow – is flat-out ridiculous. If we want to talk specifically about dealing with north-south mobility, the current disconnect in the city is a product of a dismantling of the street grid and the strategic locating of interstate highways that cut the city apart along racial lines. If we want to heal these wounds, then we have to deal with the street grid and the location of the highways, not build new highways designed as (ineffective) relievers of interstate truck through traffic.

And so, I was preparing to ramble on about all of this, and then I scrolled down to the comments section of Murray’s post. There I found a good, old fashioned democratic (digital) mob gathering to unleash their loud and unruly dissatisfaction with Murray’s article. In the comments, Murray’s argument is picked apart like the carrion it is, and leading the charge is Wylie H. So, I’ll let Wylie beat the dead horse on this one. Here’s his comment:

1) Victory Park went bankrupt and was seized by creditors. To date it has been a colossal failure as a real estate development, notwithstanding millions upon millions of dollars of tax incentives.

2) A strawman argument that people opposed to this incredibly wasteful, ill-conceived boondoggle are simply “naysayers who just don’t want to see change happen.” Really? The people who don’t want this road are just a bunch of losers — is that what the DCC is saying?

4) Mayor Mike Rawlings hasn’t “stood firm.” Indeed, prior to his election, he refused to say how he felt about the road. The former head of the Trinity Committee, Council Member Dave Neumann, got bounced from office by his constituents. To my knowledge none of the current individuals running for Dallas City Council are willing to publicly state their support for this ill-conceived boondoggle.

5) What “misinformation” and “scare tactics” have been used by the opposition? Please provide examples.

7) The City of Dallas already has more lane miles of highways per capita than almost any city in the world. Slicing and dicing the city into chunks broken up by regional highways interferes with local mobility. Traffic on Stemmons has been on the decline for years.

8) How does running a six-lane, limited access highway with five-story-tall interchanges and elevated connectors “provide recreational activity?” NONE of the proposed recreational amenities are funded — all the previously authorized bond money appears to have been squandered on pre-planning the highway.

9) How does an expressway in a flood plain promote more economic development? The sophisticated, large real estate developers holding land in proximity to this proposed road seem to be of the opinion that the visual blight, noise, and negative impacts on the park will hurt property values, not help them.

10) A parallel toll road will “promote social cohesion?” How, exactly? The residents of the southern sector won’t be able to afford to use this toll road. They would be much better served by repairing the decaying urban infrastructure they have to deal with everyday. Social cohesion would be much better served by re-stiching together South Dallas neighborhoods, which have been torn apart and disconnected by the large number of highways which already pass through the area.