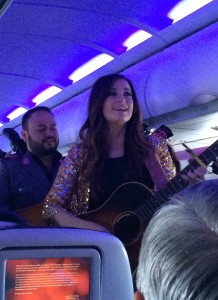 Virgin Group Founder Sir Richard Branson was onboard the “Express” flight, during which guests sipped personal bottles of champagne through red-and-white paper straws and donned 3D glasses to intensify the airline’s trademark mood lighting. Meantime, Grammy Award-winning country musician Kacey Musgraves gave a live acoustic performance in the plane’s aisle. (Musgraves actually started her performance over the plane’s crackling PA system, but soon ditched the handset to shuffle up and down the aisle through a crowd of aggressive photographers with her guitar and an accompanying vocalist/guitarist in tow. Branson brought up the rear.) 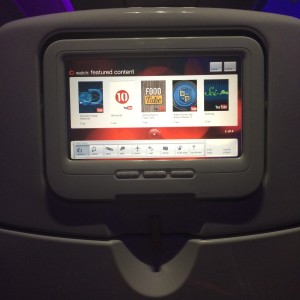 Upon landing at Love, the flight was welcomed with a traditional water-cannon salute. Dallas Mayor Mike Rawlings wasn’t aboard the special flight, though council members Adam Medrano, Philip Kingston, Lee Kleinman, Carolyn Davis, and Dwaine Caraway were. But the mayor was at a red carpet-style arrival at the newly opened Love Field gate. There, Virgin highlighted its British roots with a red London phone booth and art chronicling the brand’s decades-long history. Virgin also opened a First Class VIP check-in lounge, the only one of its kind at Love Field.

“People said they wanted competition, and they’re going to get competition,” Branson said at the arrival reception, referring to Virgin’s plans to challenge Southwest Airlines’ customer base at its home airport. “I have enormous respect for Southwest and Herb Kelleher—who is a friend, and we’ve gotten drunk together, and he almost got me back to smoking again when I’d given up for 20 years. But, they need a run for their money!”

Also welcoming the flight were students and teachers from KIPP Dallas-Fort Worth, a charter school set to receive $25,000 in cash and in-kind tickets to the school’s new music program from Virgin America’s digital #ShareTheLove promotion.