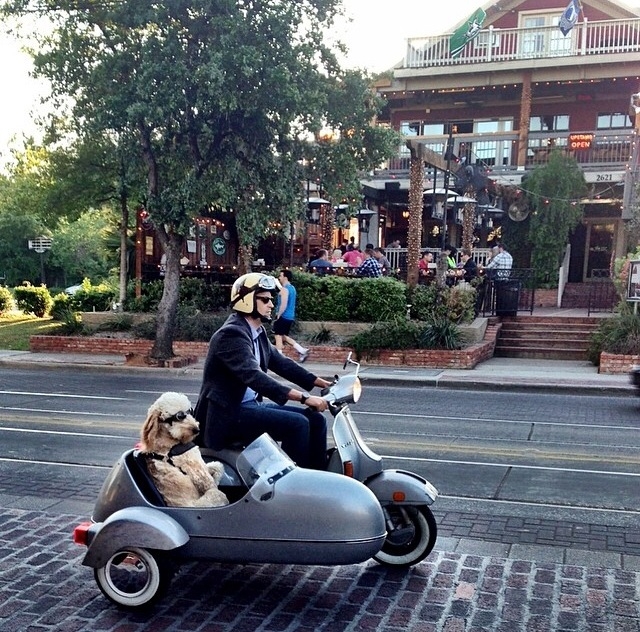 Nelson going for a ride with his dad, James.
Photography by Kristi and Scott Redman

The first time I saw Nelson, it was from my apartment window. I saw his parents on the silver Vespa first. Then I saw the sidecar. And then I saw Nelson, the Goldendoodle, in the sidecar. It was one of the greatest sights I’ve ever seen. (I realize I need to get out more.)

The second time I saw Nelson, he was at Klyde Warren Park. His dad had just put his goggles on, and he had just been loaded into his sidecar. I ran over like a madwoman and asked if I could take a photo.

I love Nelson and his family, not just because they’re adorable, but because I’ve had a scooter for a year, and every day since I purchased the scooter, I’ve talked to my husband about getting a sidecar and putting our dogs in it. But here’s the thing: it would never work. I love my dogs, but they’re not incredibly smart. Instead of staying away from cars’ bumpers, they try to sniff them as we walk past. If they see a squirrel, they lose it. So I know my dogs could never, ever be as cool as Nelson. Which means I could never, ever be as cool as Nelson’s parents.

I wanted to know more about Nelson and his scooter-riding ways, so I called his mom, Genesis Lee. Below is a Q&A on how the whole thing got started and why Nelson is probably the best dog in Dallas (sorry, Miko and Maya).

KN: How did this even get started?

GL: My fiance, James, has been riding for more than a decade on scooters. We had a black 2005 manual scooter when we got together. I had fallen in love with Goldendoodles about a year before that. So we got Nelson in April 2013. We thought, “If we just start him when he’s little, he won’t be afraid.” It began with me riding behind James and holding Nelson in a backpack between us. Then we started tying him into a basket behind us. Well, he’s kind of in love with the Vespa riding now. He loves coming with us, and hates being at home, so we looked at buying a sidecar for our Vespa. Nelson took to it immediately. The sidecar has been the absolute most perfect thing for our family.

KN: From your Instagram account (@nelsonthegoldendoodle), it looks like you all take him everywhere. What is the reaction from people on the road and how does Nelson react to them?

GL: Almost every time we drive, there’s an enormous amount of people that lose their minds. It’s a manual Vespa, so there’s a lot that goes into driving it. There’s an aspect of being very cautious, making sure people know you’re there. And then throwing in a sidecar with a dog on top of that… Nelson will get whistled at and yelled at and catcalled at. Nelson will seriously not give two looks to a person who’s yelling at him. He’s totally focused when he gets in the sidecar. It’s really great for us, because we don’t have to worry at all. I don’t know what other dog would be okay and wouldn’t pay attention.

KN: Nelson rides with goggles, but no helmet. Why is that?

GL: Dogs don’t really have head injuries. We do put the goggles on him, because that is one thing that’s recommended for dogs that ride frequently. They could actually go blind without any protection on their eyes.

KN: Where do you get the goggles?

GL: They actually are specific for dogs. There’s a brand called Doggles. They’re UV-protected sunglasses for dogs. They have special straps to fit around their ears and their neck to keep them on.

KN: After I took a photo of Nelson, I posted the photo on Instagram. He (yes, Nelson runs his own account) was quick to respond. What made you start his account?

GL: I knew I was going to be one of those dog moms who just takes photos of their dog constantly. So I started his own Facebook, mainly so my mom, who’s out of state, could keep up. I started his Instagram and didn’t realize at all that dogs and pets were a thing on there. We have almost 2,200 followers. We were pretty shocked that we even got to 200 followers. The other day, we had someone pop out of their sunroof and yell, “Is that Nelson?” It’s funny, because we didn’t even know him. We get recognized almost everywhere we go. People know Nelson and they know Nelson’s life. We’ve been able to connect with people all over the country. It’s been a really, really fun thing.

KN: You all have even been featured on Buzzfeed.

GL: What’s funny is that went around way more than we thought it would. We drove up into Ten Bells a week or two after it was written, and  a guy jumped up from a table and said, “That’s the Buzzfeed dog!” For a couple of weeks there, a lot of people recognized him from that.

KN: Did you expect Nelson to become so popular?

GL: Not at all. The scooter riding, the Instagraming, it really just came out of a love of what James and I love doing and our love of Nelson. All of that would have happened if we had no followers on Instagram or if we had a million.

It’s been fun, just because we think he’s the greatest dog in the world. It’s fun to have other people think he’s pretty great, too. 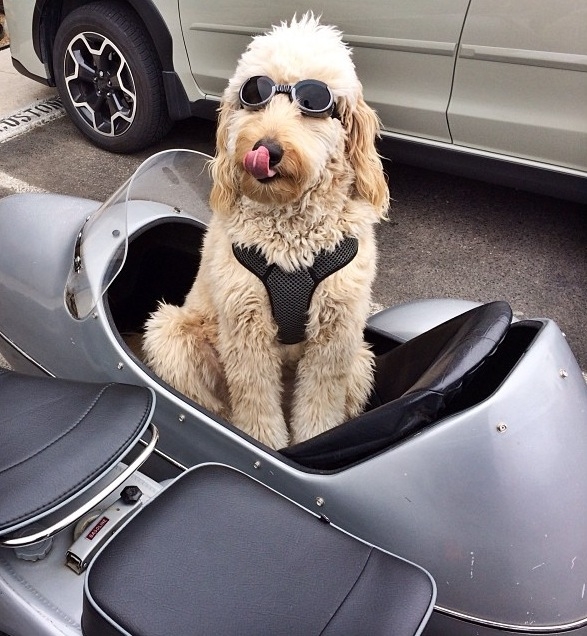 Nelson and his Doggles.
Photography by Josh Blaylock