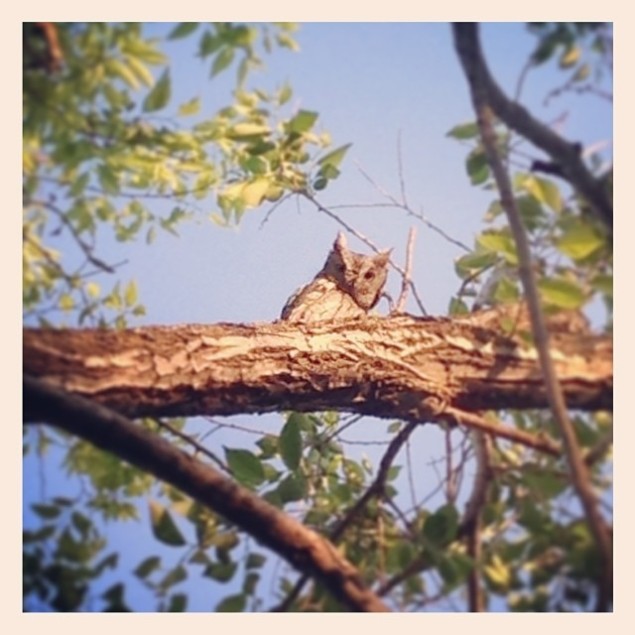 This is a photo of the owl that dive-bombed me five times last night.

I took this photo sometime last week. My son was with me, so I guess it would have been Tuesday or Wednesday. Probably Tuesday. Anyway, that’s a tree in my backyard, and I’m sorry for the poor quality of the photo. I didn’t invent the iPhone; I just stare at it all the time. As best as I can figure, this is an eastern screech owl. You probably know it better as Megascops asio. I don’t see a ton of owls, especially not during daylight, so I admit I was a bit fascinated to see one, in part because it reminded of this.

So: the dive-bombing. Around 11:30 or so last night, I went out to my back steps to have a cigarette. (Yeah, yeah — I know. I KNOW. Save it for another time.) After I was finished, I began to walk down the sidewalk to toss the butt in the garbage can in the alley, about — let’s see, I’m pretty bad with distances — 50 to 75 feet away. As soon as I left the back steps, this owl flew over my right shoulder, close enough that I had to duck and, while not mandatory, loudly curse. I didn’t realize it was an owl at the time. I still didn’t realize it was an owl when, about 10 feet later, it flew at me again, this time skimming the top of my head.

I made it to the garbage can without further incident. Then I looked up. The owl had landed on a nearby branch, then flew up to perch on one of the power lines, facing me. When I made a move to head back to the house, it moved. It was stalking me. I opened the back gate, and it flew right through, very close, landing above the gate on a branch, looking down on me again. After a few minutes spent contemplating if I could sleep outside, the owl flew away. I couldn’t see where — because I’m not an owl, though I am sometimes a nocturnal hunter — so I decided I had to try to make my move. I made it about 15 feet when this jackass owl comes back, buzzing the tower again, so I made a run for it. Just before I got to the back steps, I turned my head slightly, and there was the owl again, a few inches from the back of my head, close enough to feel the flapping of its wings. Then I went inside and watched The Grey and tried to figure out how Liam Neesons would handle it. I didn’t have any airplane bottles of liquor that I could break and tape to my fists, so I just went to bed.

OK, so my question for naturalists or people that know more about owls than I do. Actually, several questions: Is it normal for owls to do this? Is it trying to protect a nest in my backyard? If so, do I have to wait, like, two months, for the eggs to hatch and then for the baby owls to have enough strength to leave the nest? Is there any way I can come to some sort of detente with this owl? Do I just not go out after dark? Is it possible I was bitten by a radioactive mouse, fusing our DNA and making me a mouse/man hybrid superhero and this owl has identified my new mouse-ness? Is that sort of the lamest superhero you could be? Mouse-man?